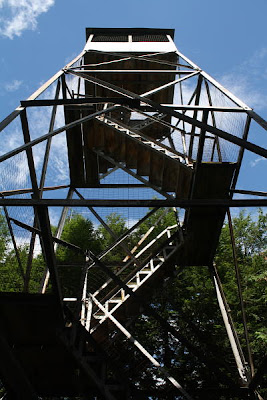 "Hey, Pat, you're sure you don't want to check this out?"

Once again he expressed disinterest. He couldn't handle heights. The relocated fire tower adjacent to the Adirondack Museum in Elizabethtown would be too much for him.

I understood. I had phobias when I was a kid, afraid of the dark and also suffered from claustrophobia. I grew out of those fears but would never criticize or joke about someone who suffered from a condition like vertigo.

But me and a fire tower? No problem. Years ago when I was younger I scaled Poke-O-Moonshine mountain and while the view was great, I wanted more than the 2180-feet-above-sea-level view provided by the mountain. So I climbed the Poke-O fire tower and took it all in.

This fire tower at the museum wasn't that high. It stood on a low flat area surrounded by mountains, not atop one. I could handle it. Easy.

After getting permission from the museum employee on duty, I entered the tower from the second floor exit. I looked up. Uh-oh. Steep stairs and the vast sky above. Sunny, partly cloudy. Maybe it was the movement of the clouds, the changing light pattern, that gave the impression the tower was slowly tottering back and forth.

OK, it's nothing. I started to climb -- slowly. Is this thing safe? What if an earthquake strikes? They're rare in the Adirondacks but they do happen. What about a sudden gust of wind? Recently bad storms have knocked down huge trees in the region.

I was being stupid. There was no reason to feel a bit unsteady on my feet. I kept telling my wobbly brain that. But sometimes a brain has a mind of its own.

There was a warning sign before entering the tower proscribing a limit of four people at a time. How did they ascertain that figure? Is that four average-sized adults? I'm large enough to count as two. And Pat is like me: a big guy. Good thing he stayed behind.

I carefully make my way up the steps. I stop to take shots; the views are great. But I don't lean too hard again any of the metal rails. They seem sturdy enough but just in case...

I concentrate on my photography. The vertigo goes away after I make it to the top. Great shots. A grand vista in all directions, mountains and clouds. A house in the distance built on a mountainside, peeking out from the tall trees.

That was easy. Now to head down...

And I notice how steep the stairway is going down. Somehow it's steeper than when I ascended.

Carefully, step by step, I descend.

Back when I climbed Poke-O-Moonshine -- I was younger, and more importantly, crazy. 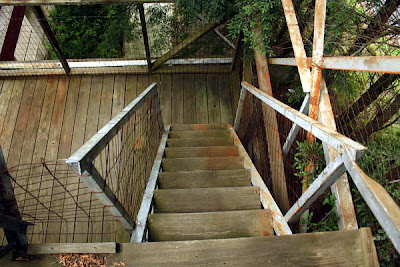