United Against United Group In Oswego

It’s been rough sledding for the United Group in Oswego.

United Group is the Troy-based company that wants to build student housing in the City of Plattsburgh. There are been some opposition to the plan because the project conflicts with a proposed change in the zoning laws.

Center City residents are tired of the problems caused by unruly college students and want to limit the number of students living in an apartment unit to three, not four as United Group wants. But the opposition the company has encountered so far in Plattsburgh is nothing compared to what it has faced in Oswego where it has been trying to push through a similar student housing project.

According to various articles published in the Syracuse Post-Standard newspaper, the United Group’s first plan was to build in the city of Oswego. But that project was killed last year when citizens near the proposed site rallied, signing petitions, putting pressure on their elected officials.

These citizens were against a concentration of students – ranging from 300 to 400 – being placed in the midst of their quiet neighborhood.

There was even talk about rezoning to block the project. Faced with rezoning, the landowner of the proposed site agreed to a deed restriction limiting the size of any development on his property.

So United Group moved the project closer to the SUNY-Oswego campus, leaving the city behind and moving on to the town. This time the number of students to be housed has jumped to 600. But citizens in the town of Oswego are against the project. They had a lawyer challenge the decision by the town’s zoning board to approve the project, but a state Supreme Court judge ruled back in August that the decision was legal.

That’s one hurdle jumped but a few more remain for United Group, including a site review and traffic and environmental studies.

It’s interesting that when United Group made its presentation in Plattsburgh that it mentioned it had a project pending in Oswego. The company didn’t explain how pending it was.

On The Loose Again 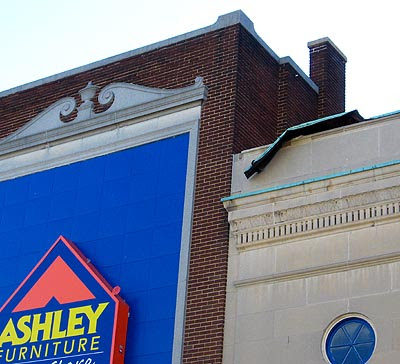 Apparently this building doesn’t want to cooperate. A while back it sluffed off some of its stonework, the chunk hitting the sidewalk. Fortunately no one was hurt.

The city building inspector looked over the building and other stonework sections were removed before disaster struck. Now the roof is acting up. 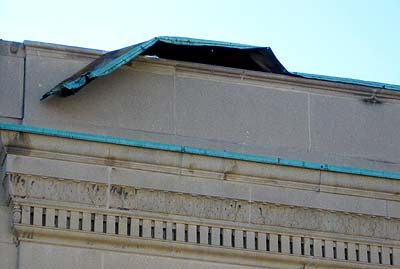 And while not as potentially nasty as falling stonework, this roof strip could give someone a noticeable headache.

Instead of building new stuff, it’s time for the city to maintain what it already has. The average tourist is unimpressed by the sight of decrepit buildings falling apart – especially when one such building drops a piece of itself on the tourist’s poor skull.

On paper it sounds good. The proposed student housing on the Saint John’s Academy property would have employees on site plus resident advisers, all to keep an eye on things.

The developer, United Realty Management Corp. of Albany, said it would have five or six personnel on grounds, including a manager. This makes an interesting contrast to the stories of absentee landlords in Center City who collect their rent and do little to maintain their properties or handle problems caused by some tenants.

Maybe I’m a bit too skeptical, but I remember the incident of the bar that wasn’t going to be a bar. Back in the day when the city (supposedly) was upset with too many drinking holes, there was a businessman who fought to establish another one downtown. The businessman said his place would be different. It would also offer coffee; he would install special coffee-making machines to serve caffeinated brew.

Or so he was quoted in a newspaper article. I visited his bar after it opened. It appeared to be just like all the other bars pushing alcohol. A hang-out serving cheap suds to college students.

I noticed a detail was missing. I asked the bartender where the coffeemakers were.

He grunted. “Maybe they’ll be installed next week,” he replied.

Apparently I was the only person who tracked the controversy about the bar. Or who noticed that specially brewed coffee was never served there.

United Realty could be really offering properly supervised student housing. But projects make adjustments along the way due to budgetary or other considerations. Maybe United Realty could make its business plan freely available, showing the payroll line items for the full time on-site personnel. And from there inform the city about any changes with these items.

Personally, I’d like to see if there's a line item for coffeemakers.

It’s a matter of numbers. Three versus four.

For decades citizens in Plattsburgh’s Center City have seen the character of their neighborhood deteriorate. Theft, vandalism, noise. Landlords have converted one family homes into apartments for student housing. This means that some unruly transients end up ruining the quality of life for the permanent residents.

Some of the Center City residents have taken action. They don’t want their area to remain a combat zone.

These residents pay their taxes, obey the law. They work within the system, trying to create needed changes.

Citizen activist Nancy Monette and others have pushed for a proposed change in the law that would limit three unrelated people in an apartment unit as a functional family. This proposal, say its advocates, makes student housing less profitable, removing the incentive to convert properties into such housing. In turn, fewer students would be concentrated in one neighborhood.

Monette states other communities find the ordinance to be very effective. Some have even reduced the number of unrelated renters down to two.

If it works elsewhere in other college towns, it should work in Plattsburgh.

But the three per unit proposal has hit a snag. Mayor Donald Kasprzak wants to review it.

Why? Because a developer from Albany plans to build student housing on Broad Street, the southern border of The Combat Zone. The developer says he needs four students per unit or the project won’t be profitable. The mayor favors the project because it will generate tax revenue.

This is the same mayor who stated that Center City residents have tolerated unruly college students for too long.

But if he kills the three per unit proposal, conflict will continue, no decrease. Citizens who worked so hard to bring changes in the law will once again feel betrayed.

There won’t be peace in The Combat Zone. 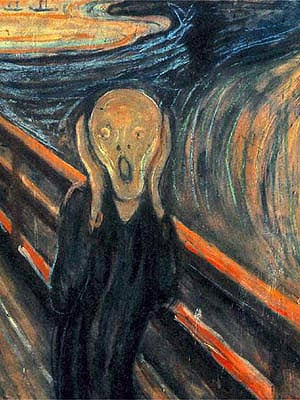 A winter night. Walking through the central neighborhood of Plattsburgh, on my way to a college event. Groups of young people on each side of the street, throwing flaming toilet paper at each other.

A warm, sunny day. Walking down a sidewalk in Center City. I easily notice across the street three young guys who have flipped a car over in a driveway. Shouting, screaming, swearing, they’re kicking away on the car, one beating it with a baseball bat, windows cracked and shattered. Gas pours out all over the ground.

For decades Center City has suffered from the plight of unruly college students. And while those students are in the minority, it’s a potent minority. So few cause so much trouble.

But there’s profit to be made if you’re a landlord. Buy a one family house, chop it into apartments, and rent them out to college students. House by house the character of the neighborhood changes. Vandalism and noise. Rudeness reigns. Come home and find a college couple getting ready to couple behind your hedges. Or enter your bedroom and find a complete stranger, a drunken college student, passed out in your bed. (Make sure to check the sheets for vomit.)

Taxpayers who reside in Center City complain. Complain to the mayor, the police chief, the college president. Lately some of these issues have been coming to a head. Advocates are pushing for something to be done. But they run up against the money angle. Landlords and developers want to make a profit on their investments. The city wants to collect taxes on those investments.

But what about the enforcement of zoning, civil, and criminal laws to control the problems? Once again: it’s a matter of money. The city has a limited budget; it doesn’t have enough building inspectors and police officers to handle the situation.

So Center City remains plagued by vandalism and noise and litter and overall disrespect.

Welcome to The Combat Zone. At least one downtown establishment in Plattsburgh decided to fix up its deteriorating façade, replacing moldy molding with fresh material. Even though the upgraded molding hasn’t been painted yet, it looks a lot better than the dry-rotted crap that was falling all over the sidewalk.

Now if only other building owners would follow this example, especially when they house businesses that are offering classy services… 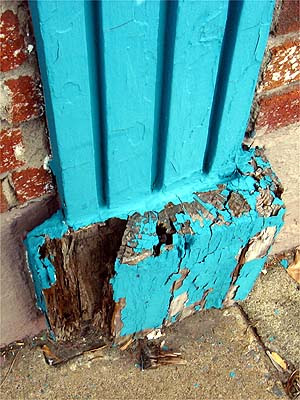 Even at night certain details stand out, pointing to a neighborhood sliding into a slum area. Daylight just makes the details easier to spot. 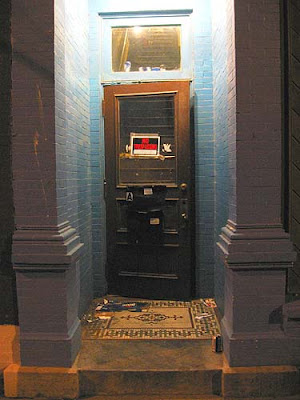 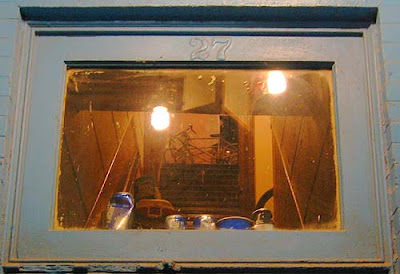