They Try To Ignore Her But She Won’t Wheel Away


Self-described  Warrior for Justice Debra Buell is using her legal sword to cut through the red tape.  After 25 years impatience is understandable.

The advocate is pressing Plattsburgh City and other entities in The System to comply with the Americans with Disability Act (ADA).  Enacted in 1990 the act’s goal was to eliminate barriers encountered by members of the handicapped community.

Example: Most people can walk up stairs without any problems but others such as those using walkers don’t have the same convenience.  A ramp would solve the problem but not when it remains unbuilt.

Debra prefers awareness, compliance, and enforcement by The System without the need for confrontation.  But after years of expressing her concerns through official channels very little has been done.

That’s why she is forced to take legal action as a self-described hell on wheels.

She has spent innumerable hours researching the ADA and related laws.  Debra is unpaid, working mostly on her own.  The North Country Center for Independence (NCCI) has helped her with her advocacy, sharing her concerns.

The System seems adamant about continuing as usual, i.e., not doing a frakking thing.  And now in one instance able-bodied citizens might also be getting screwed.

The situation involves a missing curb cut and a five lane crosswalk.  In the area of 306 Cornelia Street there’s a Y intersection, Broad Street splitting off from Cornelia.

A few years ago changes were made at the intersection to accommodate a new Walgreens store that opened where the WIRY Radio station once stood.  When the area was under reconstruction, Debra says, the city should have added a curb cut (sloped sidewalk section) on the north side of the street across from the Walgreens entrance

No curb cut results in a safety concern.  The crosswalk signal only allows 21 seconds to cross, not a problem for someone who isn’t pushing a baby stroller or using a walker.  Until the cut is installed, Debra says, the duration of the crosswalk signal should be lengthened to one minute.

According to Debra the city came up with an alternate solution: eliminate the crosswalk.  If it’s not there the problem is solved.  No more safety concern.  Ergo no liability for the city.

Of course speeding vehicles will have complete domain.  Let cars rule.  Don’t hold up the traffic.  Too bad, pedestrians and disabled people.  Find another way to cross.  Boohoo.  (Remember: elected officials work for you.)

This is only one issue.  Debra has filed grievances with the appropriate governmental agencies about other ADA compliance problems.  Typical results: delays, short say-nothing replies, or no response.

Such tactics only motivate her all the more. 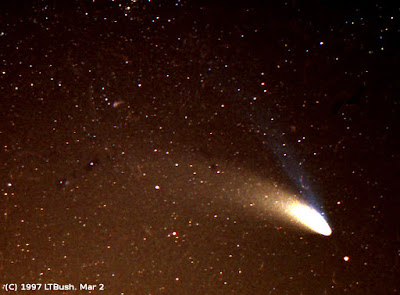 The night sky has remained on the unimpressive side since the 1997 visit by Hale-Bopp.  There have been stories that other approaching comets would be just as spectacular as HB but they turned out to be fizzle, not fireworks.

These images are scanned from negatives, a process that was unnecessarily complicated thanks to Canon, my scanner's maker.  The company doesn't offer an updated driver for Windows 10 compatibility with its Canoscan program.  I had to use my old computer to do the basic work (Vista) and then wrapped it up on the new one (W10.).  Apparently Canon wants me to go out and buy their latest scanner. Sure, I'm gonna do that with my limited budget -- when Hale-Bopp returns. 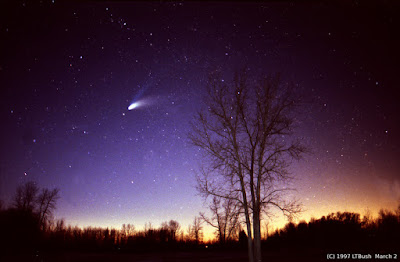 There Isn't A Planet B 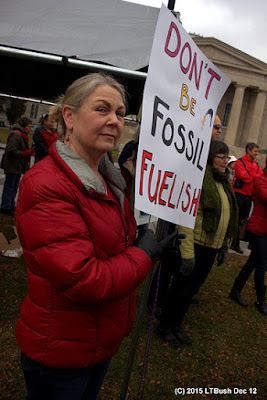 Patches of green grass that should have been buried under snow were scattered on the bare ground.  Demonstrators gathered at McDonough Monument wearing light jackets, not bundled up in parkas. A speaker observed the mild weather was evidence of climate change.

Later during the march some chanted for snow.

Meanwhile in Paris an international conference (COP21) hadn't made any announcement about mutually agreeing to limit greenhouse gas emissions.

With that in mind three activist organizations combined their energies late Saturday morning to hold a rally and march in downtown Plattsburgh to  promote awareness of the global warming threat.

Concerned citizens gathered with members from 350.org Plattsburgh, Mothers Out Front, and People for Positive Action at McDonough Monument to listen to a few speakers address the problem.

The large bronze eagle atop the monument watched the gray skies but no raindrops fell.

Plattsburgh City Councilor Mike Kelly pointed back at the nearby Saranac River, saying that it was one of the city's great resources.  This natural resource could be ruin by drastic changes in the climate induced by greenouse gases.  He mentioned his Southern accent, saying obviously he wasn't from around here.  After he relocated from Tennessee he quickly grew to appreciate the natural beauty of the North Country.

Peru native Mike Derrick took to the podium to share his concerns.  He referred to Congressperson Elise Stefanik, how he didn't agree with the Republican Representative's views on the environment.  That reason among others, he continued, was why he was going to run against Stefanik in the next election.

With loud chants the demonstrators marched to Champlain Monument and then back to pose on the front steps of City Hall. The penultimate stop was at Stefanik's local office to deliver a petition. 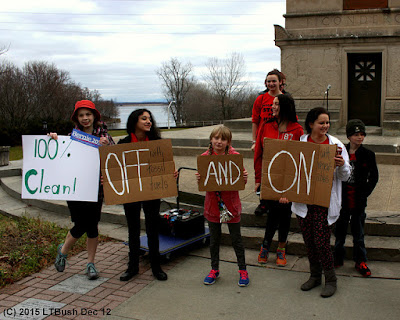 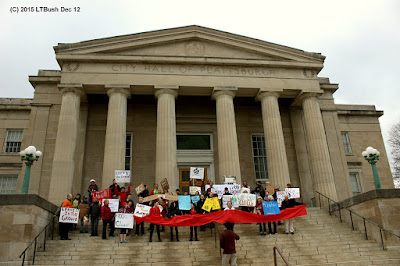 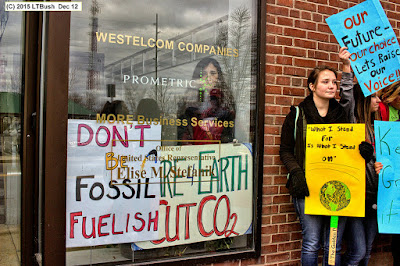