Tapping Back Into The Dead Past

This evening I returned to the PlattInfo kiosk on City Hall Place to see how well its touchscreen worked.  From what I've heard this long dead kiosk sprang back to life around a month ago.

Three information kiosks were installed back in 2013 but have spent most of their time dead, black screens.  Their purpose was to promote the city and its businesses, providing a convenient on-screen guide.

The one at the city parking lot remains dead and I'm assuming the one on Dock Street is in the same condition. (Too cold for me to walk down there and check it out.)

So how well does this revived one work?  The screen was still dirty (see previous article here) but since I was wearing gloves I decided to try a few taps.  The screen lead me to listings of various businesses but the information was outdated.  (Also the images bled off the screen, parts of the ads were missing.)  For example there was the ad for the General Trading Company, a store that closed in August 2015.  Another ghost that popped up was the Adirondack Soup Company, a restaurant defunct since 2013.

It's ironical that these companies paid for this advertising and now it's being shown long after they closed their doors.

Even if the kiosks can be restored with updated info what's the point?   The PlattInfo units are obsolete.  The same information can be found online through portable devices, cellphones and tablets.

Tax money well spent.  But the "savings" doesn't end there.  How much will it cost to remove the units and fix the spots where they stood?

Item: City residents are upset over the possibility that the tax rate might take a double digit jump.

Gee, could wasteful spending be part of the problem?

Back From The Dead But With A Dirty Face 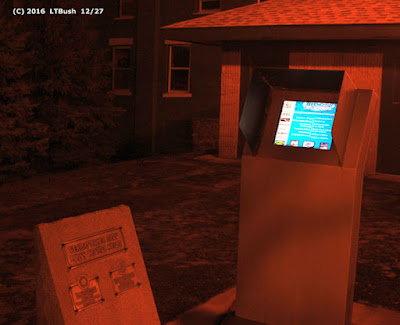 This evening a light across the street caught my attention, shining bright in the winter dark.  Closer inspection revealed that a PlattInfo kiosk that has spent months with a blank screen was back to life.

It’s the unit on City Hall Place near the Verdantique Park plaque.  In the past the only sign of life from the unit was an electrical hum heard when standing close to it.  (Apparently it still had a pulse.)  The kiosk is one of three that were installed years ago to provide information to downtown visitors.  The units worked for a while but have spent most of their existence as metal tombstones.  Thousands of dollars spent on another Sap City boondoggle. (Previous articles on this subject can be found here and there.)

The other unit down the street near the city parking lot was still blank.  I’m assuming the third one on Dock Street near the Seagull Parking Lot is still dead.  But it’s better to light one PlattInfo kiosk than to curse the dark.

The revived kiosk now displays in slide show mode ads for local businesses.  I wonder if these are the same businesses that paid for photonic promotion when PlattInfo was launched.  Out of thousands of dollars expended maybe the city will see a few cents use from the unit. 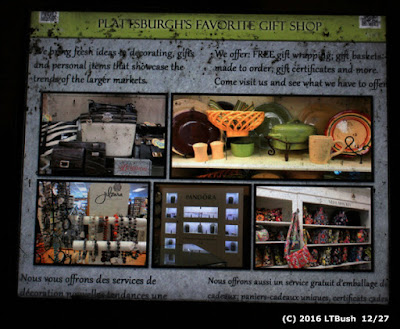 The display looks great but there is one problem: backlit dirty spots mar the screen.  The unclean surface renders the impression of a zombie that dug himself out of his grave but didn’t have a chance to wash up.  The dark smears interfere with screen viewing.  Also gives downtown an untidy look like dogshit on the sidewalks.

I didn’t have a damp rag to clean the screen.  Then again it’s not my job. 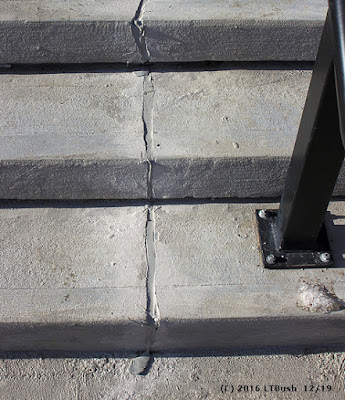 The new front steps to the Plattsburgh Public Library are falling apart despite renovations that were initiated in November 2015.  Within a few months of the project’s completion long hairline cracks developed in the concrete.

Now those hairline cracks have expanded to one quarter inch or more in width, necessitating a stopgap fill in the gaps.

For over a decade the library entrance has been one of the biggest eyesore embarrassments in the community.  The old steps crumbled to such a point that sections couldn’t be repaired.  Orange spray paint marked the unfixable sections, a warning to the unwary. 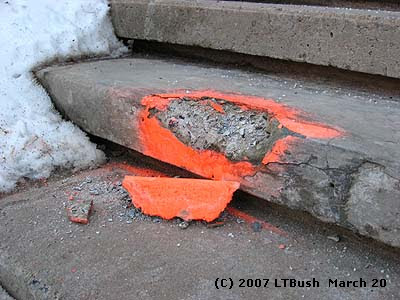 The new steps are around one year old.  They already display the shoddy workmanship of the previous ones.

In the news: Plattsburgh City taxpayers might have to suffer a tax increase onus around 23%.  Part of the problem: half-ass projects like the new library entrance. 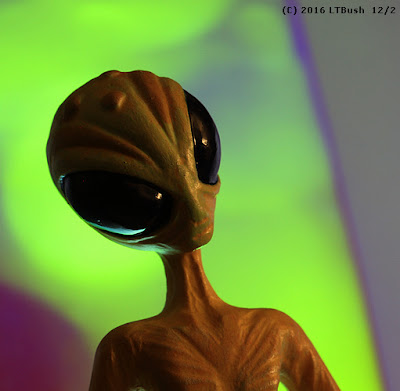 Too Foggy To Fly 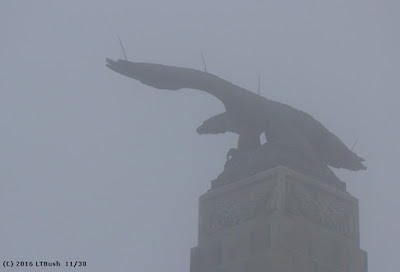