When I visited the Plattsburgh Public Library this evening I noticed the front doors were braced wide open. Uh-oh.

The air conditioning broke down again around 3 PM today. As I have posted before, it ain't pleasant when the AC is dead, especially during a heatwave with high humidity. 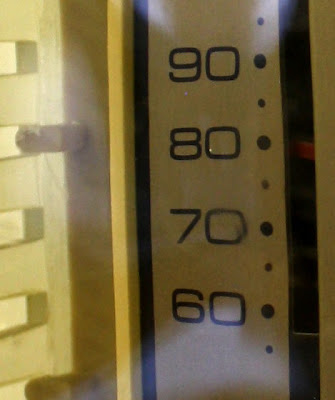 According to the thermostat thermometer on the wall it was 80 degrees F. And if the AC stays dead, I can't imagine how hot it will be tomorrow with a full day of heating from the blazing sun.

The AC was supposedly "fixed." New parts were installed. It wouldn't be surprising if more parts are on order to fix the fix.

I heard the AC dates back to 1986. I'm no expert but after 25 plus years of service it might be time to replace the whole system instead of trying to keep the old one going, rebuilding it piece by piece. But that's how the City of Plattsburgh deals with a problem: patch it up, don't replace it because the costs are too high for a new one. Of course, when the baling wire and duct tape fails, just add some more and pretend it will work.

Patchjob follows patchjob and in the long run money is wasted. A classic example is the front entrance to the library. For years the city kept screwing around, trying to keep the crumbling steps glued together, slopping on some concrete. But the steps kept crumbling no matter how much baling wire and duct tape was used.

Maybe the AC will be fixed without any more new parts. But I won't be surprised if it isn't and more money is thrown down the rathole. I would guess a new unit would be greener, saving the city some money through increased efficiency.

Spend money to save money? What a radical thought.