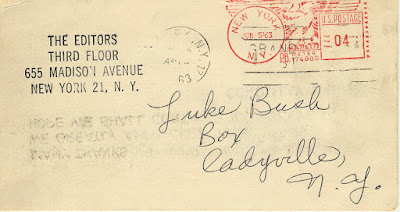 
Way back in the early 1960s a small comic book company in New York City was shifting from monster on the loose/SF/fantasy tales to superheroes.  When the Fantastic Four and Spider-Man burst on the scene only a few worked for Marvel: it was like a family business.  The company grew over the decades and now is a key member of the Disney empire.

From the beginning Marvel presented itself in a more personal manner, letting you to get to know its creative team, the Bullpen.  Unlike somewhat stodgy DC comics Marvel was looser: its people had nicknames like "Smilin'" Stan Lee and Jack "King" Kirby.

Beyond featuring letter columns in its titles Marvel also reached out to its growing audience by replying to fan letters with postcards.  Recently I dug out my Marvel postcards from when I was nine years old and took a second look at them.  (Only 4¢ to mail a postcard?  Then again comic books were only 12¢ in those days.) 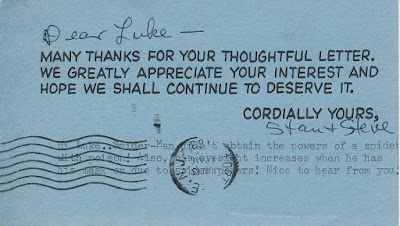 One postcard addressed issues I had raised about Spider-Man.  If Spider-Man gained his powers from a spider (albeit a radioactive one) did he have poison in his system?    Also, Peter Parker wore glasses so how did he deal with his limited eyesight when he went into action as Spider-Man?  (Being a nearsighted fan boy that question easily popped into my mind.)

Now this was in the early days when Marvel Comics had to deal with such issues on the fly.  (Also periods were never used in dialogue, just exclamation points!)  Responding to my questions Marvel wrote:

Hi Luke..Spider-Man didn't obtain the powers of a spider with poison!  Also, his eyesight increases when he has his mask on due to spider powers!  Nice to hear from you!

Thanks to the miracle of Google I found this detail at one arachnid-centric site:

As for the number of non-venomous spiders, all spiders use venom to kill their food but, in most species this venom is only harmful to their food (insects and some mammals, birds and reptiles).   LINK: http://arachnophiliac.info/burrow/how_many_spiders.htm

As for the eyeglasses that Peter wore in the earliest Spider-Man comics it was revealed that he decided he didn't need them after they fell off and broke on the ground.  So his eyesight had improved after his radioactive spider bite and he wore the glasses out of habit.  There's an anecdote that someone said Peter looked like Clark Kent (Superman) and so the glasses had to go. 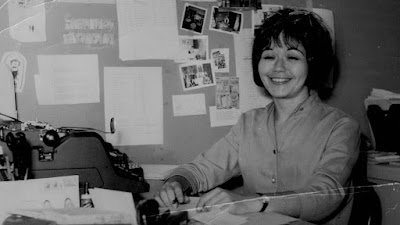 My postcards are signed "Stan & Jack" or "Stan & Steve" but the signatures look all the same.  I had read Marvel's secretary at that time, "Fabulous" Flo Steinberg, replied to the fan mail.  Besides using a typewriter for responses I suspect she also inked the signatures on the behalf of the Bullpren.. It was sad to hear she died last year from a brain aneurysm and metastatic lung cancer.

I wonder what it was like for her to deal with goofy fan letters from young readers like me.  In photographs Flo always had a smile.  I imagine reading fan mail added more smiles in her life. 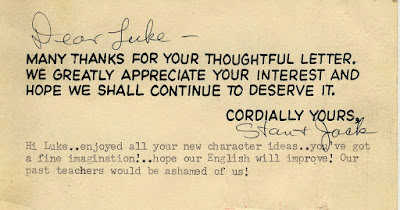 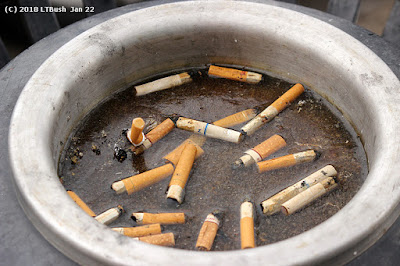 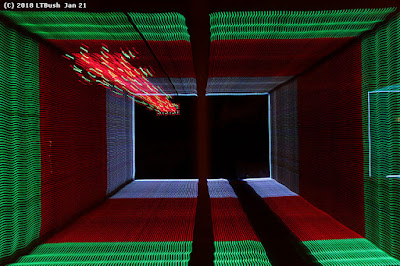 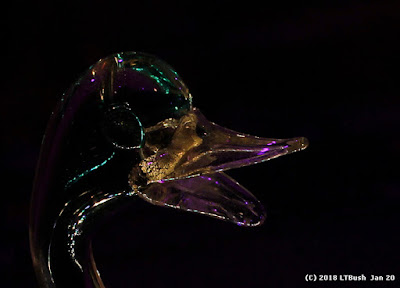 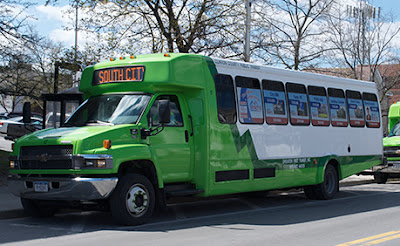 Riders can now receive email alerts when the county public bus service has cancellations or other changes.  This should help riders to avoid waiting for a bus that isn't running.

At this time Clinton County Public Transit doesn't have a formal email subscription list.  Until then County Planning Technician James Bosely will add your name if you email your request to James.Bosley[at]clintoncountygov[dot]com . 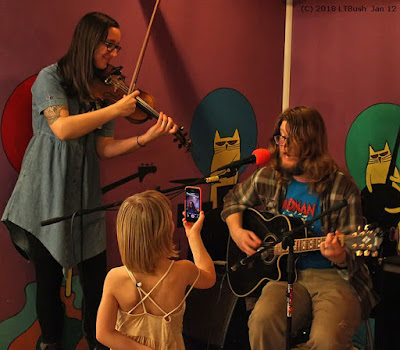 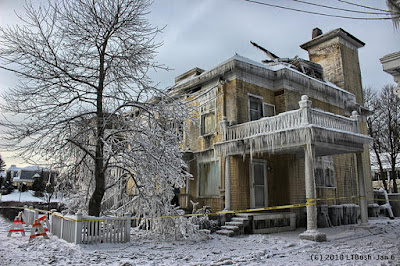 Yesterday firefighters tolerated sub-zero temps while battling the stubborn fire at 72 Brinkerhoff Street.   These images taken today show the severity of the wintry conditions as firefighters spent hours containing and extinguishing the blaze. 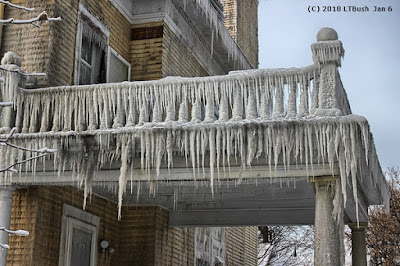 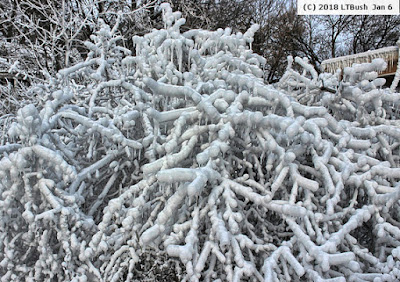 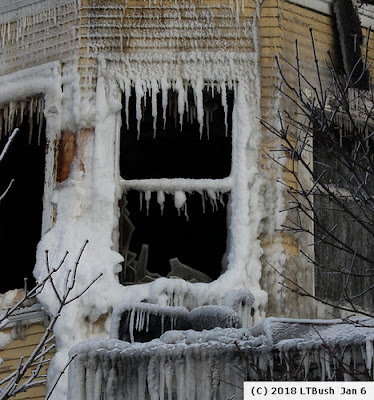 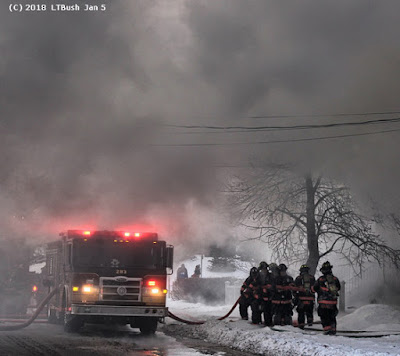 They kept pouring the water on but the flames kept popping back up despite the deluge.

This afternoon a fire erupted at 72 Brinkerfoff Street, a three story wooden house dating back to 1895.  Plattsburgh City Fire Department received a call about the blaze around 2:50 PM.

The flames appeared to be centered inside on the top floor, eating away at the roof. Firefighters directed high pressure hoses from the ground and from an aerial ladder hovering above roof level.

Sub-zero temps added to the difficulty of containing the blaze.  The spraying water coated the firefighter's black coats with white frost and also transformed trees into ice sculptures.

Sometimes dense gray smoke erupted, obscuring the view. Only flashing red and yellow fire truck lights penetrated the dirty cloud.  People smelled the smoke blocks away.  It seeped into buildings, tainting the air in the public library down the street.

From an open front door water gushed out, flowing down the street.  Steam rose up from the gutter river.  Ashen debris pooled in places.

The fire department had evacuated the building next door.  One of the displaced tenants waited at the public library.  He said he couldn't moved his recently purchased car.  He also had to leave his medication behind.

From the fire damage it appeared the house was a total loss.  The building was empty, its college student tenants away for the winter break.

An initial report suggested an unattended portable heater had tipped over, setting off the blaze. 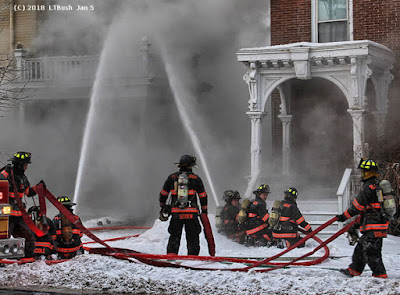 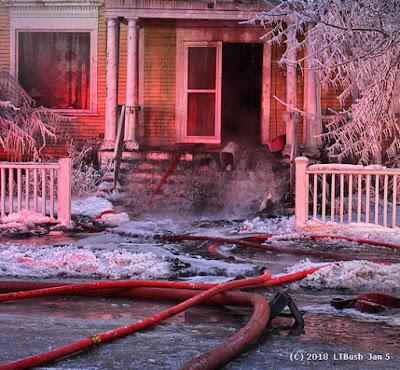 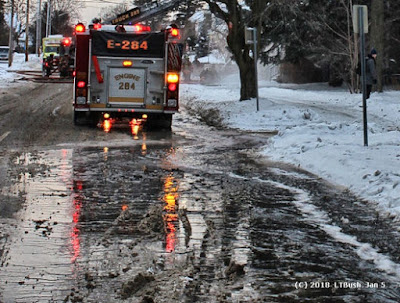 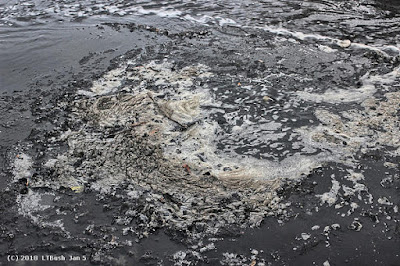 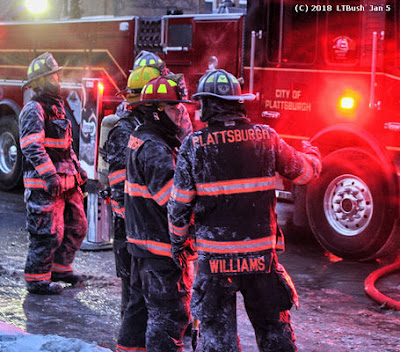 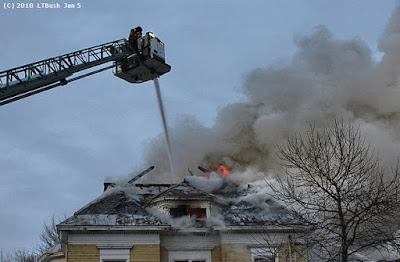 The bus never showed up.

Today I arrived at the CCPT bus stop ten minutes early to catch the 4 PM Lyon Mountain bus for a quick trip to the mall.  Another person was also waiting but his destination was way beyond the mall.  After 25 minutes in the cold another bus pulled in.  We asked the driver if the Lyon Mountain bus was delayed.

She rudely told us that service was closed down, that we should know because it was "in the news." She acted as if it was our fault for not following "the news" every minute to catch the announcement.  Her attitude: Not my problem.  I could still get to the mall but I didn't know how the other person was going to get home.

Plattsburgh City operates a mailing list that anyone can join to get the latest official announcements.  I went to the CCPT website and I didn't see any option to join a similar list.  The last update posted on the home page referred to buses back in December not running due to cold weather.  Like "the news" I don't check the CCPT site every day.  Even if I did there was no mention of the Lyon Mountain service being shut down.

It shouldn't be hard for the county to set up its own email alert list.  I do check my email every day but not "the news," whatever that's supposed to mean.

Another suggestion: customer relations training for the drivers.  This wasn't the first time I've been treated rudely even though I don't "act up" like some drivers.  Maybe I would get more respect by being rude instead of polite.  So much for being reasonable.

So if you decided to properly serve the public with an email alert list please put my address first.

UPDATE: James Bosley replied to my complaint..  Excerpting his email he wrote: "I am hopeful we will be able to review camera footage from the bus and see how the driver handled that situation, and do some coaching/retraining if necessary."

Regarding the bus cancellation he wrote: "I tried to get an announcement posted on the CCPT website, but I have to go through our IT department and they are not always available to do the posting right away. I hope to have direct access to the CCPT website later this year. We have a Facebook page for CCPT now and I make posts anytime we are concerned about the weather or have to shut down a route due to lack of buses. The radio and television news media have been great about getting our cancellation notices out recently."