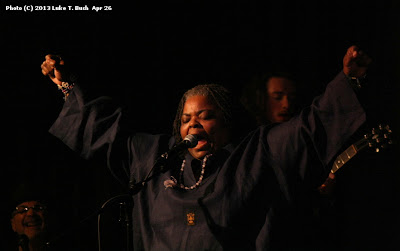 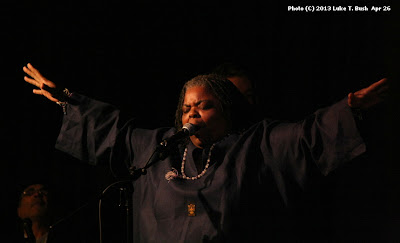 The eponymous lead singer of the Alex P. Suter Band got the crowd jumping at the Upper Jay Art Center.

With the term "art center" one would think this was the setting for evening gowns and black suits.  Not so.  The building dates back to 1921 when it was used by the Ford Motor Company to assemble model T's.  Now it's the site of the Upper Jay Upholstery/Recovery Lounge.  No fancy marble walls here, just plain walls of brick and plaster held together by rough wooden beams, all enclosing comfortable chairs and couches .  (I suspect a connection between seating comfortability and the upholstery operation.)

Despite the bare bones setting the center boasts surprisingly good acoustics, especially with the powerful vocals of Alexis P. Suter.  Her dynamic stage presence quickly wins over the audience.  By evening's end people were up and dancing.  That's not surprising because this brash baritone Brooklynite was a nominee for Best Blues Soul Female Artist at the 2012 Blues Music Awards.

More info about Suter and her band at http://www.alexispsuter.com/.  Details about upcoming events at the Recovery Lounge: http://upperjayartcenter.org/index.htm . 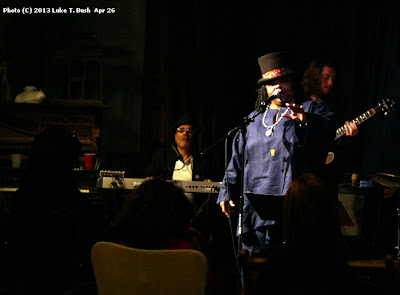 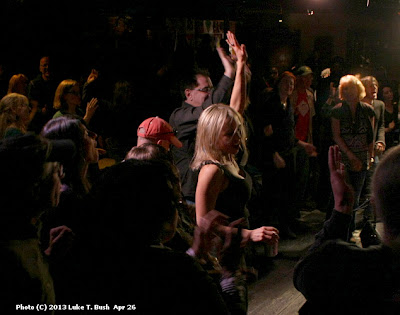 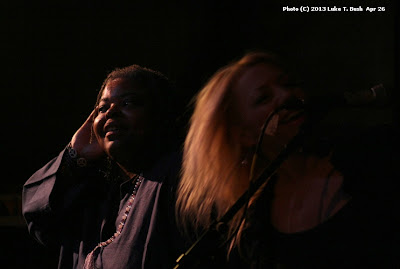 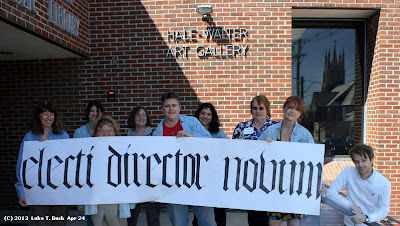 After a long search a new director has been chosen for the Plattsburgh Public Library.

A local radio personality was concerned about the lack of leadership at PPL. He said during one of his on air commentaries that many people were waiting for the announcement of the new director: a crowd had anxiously gathered outside at the institution's front steps.  With his commentary he made the comparison to the election of a new pope, how the Vatican sends up a white puff of smoke to tell the world a choice has been made. He added the library should follow suit.

In the same spirit some of the PPL staff gathered today to conduct a special ceremony inspired by that suggestion. 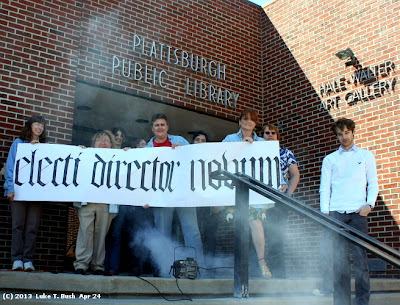 Regarding personal commentary I must mention the appropriateness of the PPL staff blowing back smoke for a change.  Hopefully that radio commentator didn't get any in his eyes – or elsewhere. 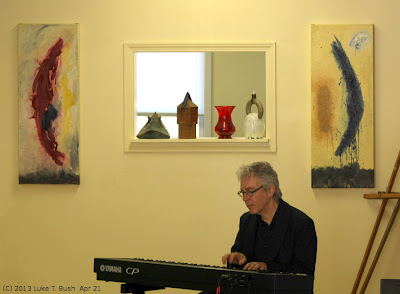 Musician-composer Adrian Carr performed some of his original compositions Sunday evening at ROTA Gallery, 50 Margaret Street.  Adrian is also a visual artist; a retrospective of his paintings will be on exhibit until Monday May 6th.  In the background (left and right of the window opening) hangs his diptych entitled "He Said, She Said."  ROTA is open daily 12 Noon - 5 PM.  More info at rotagallery.org or email rotagallery@gmail.com . 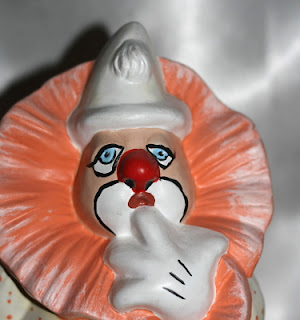 Plattsy hasn’t been around for a while, yes.  Well, forget all those stories you heard about Plattsy being hauled off to Gitmo.  (Those VIPR guys have no sense of humor.  As if Plattsy could fit an atomic cannon inside his clown car with fifty other bozos.  Plattsy will only humorize, never terrorize.)

Is it just Plattsy or have you ever noticed that when President Obama is on TV talking about innocent people being killed he never drones on about it?

Speaking of drone strikes, local radio “personality” Ducky Drake at WIRY 1340 is gonna to retire in June.  So who’s gonna handle public relations for Plattsburgh's mayor?  Ducky is still making noise about the Plattsburgh Public Library (PPL), going on that a new director hasn’t been found yet for that fine institution.

The other day he said whenever the library finally hired another director it should emit a puff of white smoke like the Vatican when it elected a new pope.  Oh, that Ducky – always blowing smoke posteriorly up his listeners.

He also said that people were gathered outside the library, anxiously awaiting the announcement of a new director.  So how many people are gathered around WIRY studios waiting for the announcement of who’s gonna replace him?  Or maybe they stand within 50 feet of the station because that’s the only way you can pick up WIRY's tremendous AM signal.

Ducky is famous for immorally – oopsa, immortally – calling for the complete shutdown of PPL, letting other libraries do the job.  People ask why he seems to hate the city library so much.  Some say it's because it can't read: that's why he's never seen around PPL.

Heya, that's not nice.  Ducky does an OK job on air reading portions of Press-Republican newspaper articles as if the stuff is original WIRY news reporting.

Wait, what’s that sound?  I see something outside my window, up there in the sky, heading this way.

ROTA Zone: A Dimension of Sight, Sound, and Mind

The last opening at ROTA Gallery - the Spring Open Community Show - featured works both visual and spoken by local artists.  An open mic wrapped up the evening, a series of songs, poems and prose expressions.  ROTA has an open mic poetry event every two weeks on Thursday evenings.  More info at its Facebook page  or email rotagallery@gmail.com .

You Never Know What Will Turn Up... 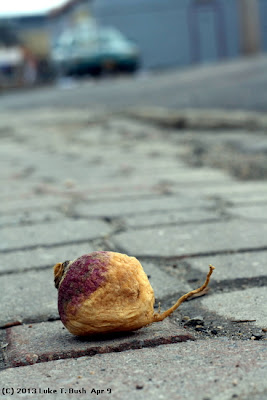 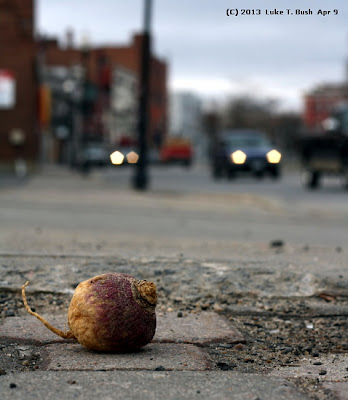 ATTENTION: New York State citizens.  How many of your state legislators are card-carrying members of ALEC?

If you're not familiar with the American Legislative Exchange Council you can raise your awareness by watching the Bill Moyers documentary, "The United States of ALEC."  The doc was shown Friday evening at the Plattsburgh State campus with comments and Q&A afterward with Susan Lerner, Executive Director of Common Cause New York.

"The United States of ALEC" shows how the organization operates like a lobbying group under the guise of a charitable organization but without the restrictions placed on lobbyists thanks to its 501(c)(3) status.  Until a whistleblower came forward with documentation, ALEC was out of public view, stealthily influencing state legislators to promote and approve model legislation it had created.

Why the secrecy?  Despite labeling itself as a bipartisan organization, ALEC pushes an agenda that many voters oppose.  For example, it's been the covert promoter of model bills – some that have become law in other states –  for privatizing education, restricting voter rights, and limiting the powers of unions.  Also it works against certain types of proposed legislation like campaign finance regulation.  It's funded by big power players, corporations and conservative groups, who want to change the system on the local level to benefit their goals.

Businesses and political groups have the right to promote whatever bills they want.  But in the case of ALEC, the M.O., the behind-closed-door machinations, is the problem..

(For fun I could make an allusion between ALEC and evil secret organizations you see in spy adventure stories but that wouldn't be fair.  SPECTRE and THRUSH are fictional entities.)

Obviously you should be aware if your elected representative belongs to ALEC and is really looking out for the interests of the power players, not the average Joe or Jane.  As a voter-taxpayer you're entitled to know if a state legislator is a fellow traveler of ALEC, right?

Not in New York State.  You could hear some audience members reacting in surprise – like gasps of consternation – when Susan Lerner told them that New State legislators exempted themselves from FOIL, the Freedom of Information  Law.  Susan explained: "We really don't know if we have two or three ALEC members or whether we have 15, 20, or more [in the NY State legislature]."

So far ALEC, she pointed out, hasn't passed any of its model bills in New York but has successfully blocked ones introduced by others, important bills that had broad based voter support.


An audience member asked what could be done to deal with ALEC.

Susan replied that one way was holding our elected officials accountable.  "[ALEC] has managed to achieve what it has achieved by acting in secrecy."  She mentioned that only one official was listed on the ALEC website as state chairman but that person was no longer in office.

She asked the audience to call their state legislators and ask each one about belonging to ALEC.  Then citizens should call or email Common Cause with their inquiry results.

Susan said: "We're going to start to get some answers.  The ones who aren't members of ALEC will tell us.  Some may actually say they are.  Then we will have a list of the ones who are surprisingly quiet on the topic.  And we're going to have a much better idea who is active [in ALEC]."

"Sunshine is the best disinfectant," she noted.  "We need to smoke them out and bring them out into the open."

She explained Common Cause has filed a complaint with the IRS challenging ALEC's tax exempt  status.  "This racket is really stopped if the IRS lifts the tax exempt status."

The tax lawyer for Common Cause reviewed the documentation and stated the case against ALEC was one of the strongest he had ever seen.  He was so outraged by what was going on that he volunteered to take the case pro bono.

The case is proceeding but no one knows what is happening.

Susan said: "Once a complaint is filed the IRS goes into a lengthy and careful and slow review process and they do not talk to the complainants, they don't publicize what they're doing.  They are really trying to get to the bottom and verify what we've told them, [to] give ALEC a fair chance to explain what it is doing."  A proceeding, she noted, can take two or three years. 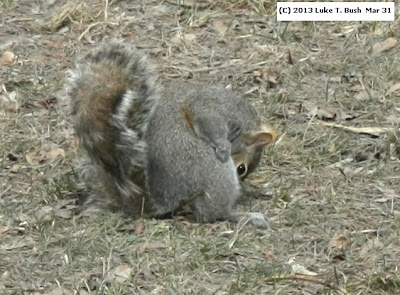