I just added a new photo essay over at my dot com / website. You can directly access it here. And if that link doesn't work, go the the homepage for writog.com and under HEADLINKS click on the headline "Steven Kellogg Wows Them All."

Below is a copy of a letter to the editor that addresses a detail that seems to have escaped everyone else's notice. Instead of waiting for it to be printed in the local newspapers (snail news), you can read it now.

Am I the only person who noticed this bit of mathematical wizardry?

I am referring to a notable detail that appeared in a Press-Republican article on September 19th. The article, "City of Plattsburgh budget crisis," discusses the increase in the tax levy for the year 2006. It mentions that the common council approved what was "widely reported as a 27-percent increase." Then the article states: "The increase actually turned out to be 34.71 percent when the numbers shook out, the Press-Republican learned this week."

Since then the figure has been simply referred to as a 35-percent increase, as if the "official" number of 27-percent never existed.

This leads to some questions:

2. How were the numbers shook out?

3. Do citizens have to "pre-shake-out" any numbers being bandied about by the mayor and the council? 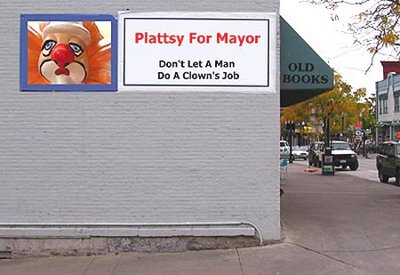 “Yup, I’m the one you need to run the circus that is Plattsburgh. Why am I qualified for the job? Let me prove my point by resorting to a time-honored tradition of political campaigning, firing cheap shots at my opponents.

“Take this guy Kasprzak -- please. What kind of name is that? How do you syllabize it? Hell, how you do even pronounce it? Can you trust someone with so many consonants in his surname and only two vowels to go with them? I bet if you trick Kasprzak to say his name backwards, he’ll pop back into the fifth dimension. Me, I would rather vote for Mr. Mxyzpltk.

“And then there’s Duniho; he’s some sort of overpaid back rubber. Does the city need a chiropractor or a protractor, whatever the hippie term is, to straighten things out? Yup, a groovy Democrat is the answer. What’s he going to do, climb on to that big metal eagle atop MacDonough Monument and turn it into a dove by massaging the subluxations out of its back?

“Don’t clown around. Vote for me and let the fun begin!”

It sat outside the post office, an old four-door car, unremarkable –- except for one aspect.

The car’s exterior had been converted into a message board, announcing the owner’s disdain against sexual sin and immorality. Adhesive letters, black font on a metallic background, ran along different sides of the car, firmly stuck in place. Usually such letters would be used for quotidian purposes such as marking the address on a mailbox, but now they were being pressed into a different kind of service.

The owner apparently had to make do with a variety of letter sizes, unable to finish her messages with the same type size. This suggested a ransom note composed of individual headline letters glued onto a sheet of paper, the letters cut from various newspapers so that it would be harder to trace where the note was composed.

Apparently the car-owner was the same woman who frequently writes letters to the editor at the local newspaper. Her missives rail against pornographic magazines on the newsstands, such as People, that show a bit of cleavage now and then on their covers courtesy of an attractive movie starlet. 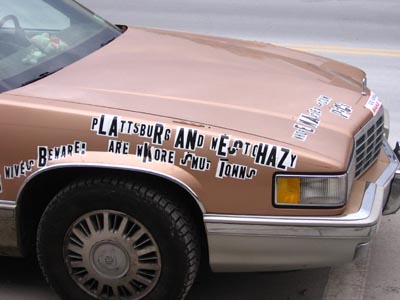 Now the anti-pornography crusader was taking her message to the streets. Besides decals evincing a belief in Jesus, the owner had affixed these proclamations to her car:

-- DID YOU TELL YOUR WIVES THAt yOUR CHEAtING ON tHEM WitH tRAMP CoLlEGe WhOReS!

The assumption could be made that her letters published in the newspaper were sometimes modified, diluting or omitting key thoughts. By using her personal transportation, the woman could drive home her point in a direct, uncensored way.

maYbE sHE SHOULd tRy bLOgGng.

As illustrated in a previous post below, there was a small rug in front of an entrance on Clinton Street that a dog had dumped on. To take care of the problem, one corner of the rug was flipped over the offending mess, a partial cover-up.

Then someone came up with a real practical solution: 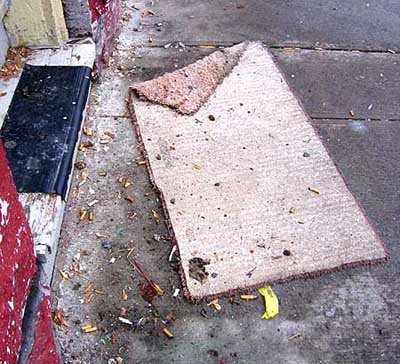 But someone eventually had a better answer to the problem. One afternoon I noticed the rug had been thrown into the gutter, left there for the street sweeper.

The rug is gone. But Clinton Street is still dotted with litter. 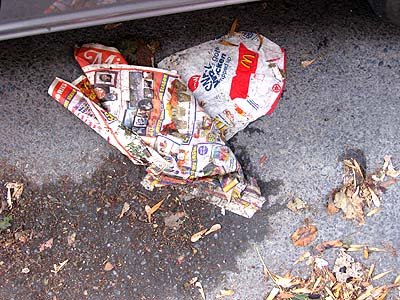 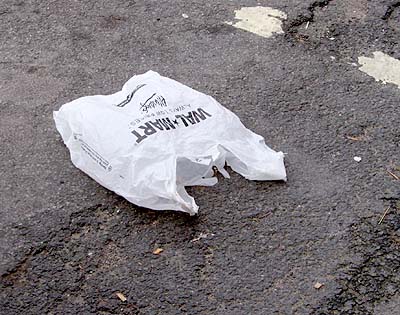 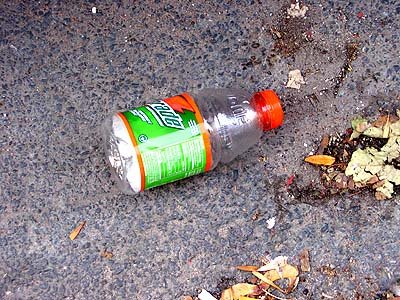 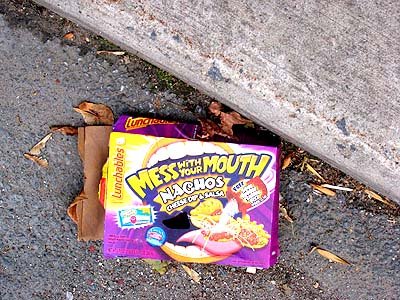 OK, I don't know about you, but I'm getting tired of posting trashy images online. Time for a change, but you'll find it over at my web site, www.writog.com. Just click here

And if that link doesn't work, just go to writog.com and under HEADLINKS click on "Critters At The Fair."
Posted by Luke T. Bush at 5:14 AM No comments: