The meeting will be held Wednesday, December 4th, at 10 AM in the first floor conference room in the Clinton County Government Center.  It is open to everyone.

The shift to other services such as taxis for medical appointments has caused a drop in public transportation ridership, explains Debra.  This result has caused some counties to reconsider funding of their public bus systems.

In our area the Clinton County Public Transport (CCPT) bus system might be impacted.  Besides Medicaid clients a reduction or elimination of its service would affect not only the disabled but also seniors, school children, and others who cannot drive or are unable to afford a car.

On September 1st scheduling for transportation to medical appointments for Medicaid clients was taken over by a private company, Medical Answering Services (MAS).  According to Debra this transition has been problematic and it will be the focus of the upcoming meeting.

For example, she has noted in the past, communication problems and the lack of adequate training have led on occasion to rides being canceled, the client with a serious medical condition unable to see a doctor.

The meeting will be an opportunity for those affected by the change – such as clients, agency representatives, ride vendors and county leaders – to voice any concerns or problems they may have with the takeover by MAS.

Scheduled to attend will be Tim Perry-Coon, Program Research Specialist, New York Dept of Health Office of Medicaid Management.   Also in attendance will be a representative from the scheduling contractor MAS.

For more details about the meeting Debra Buell can be contacted at adirondakdeb@gmail.com.  Email is her first preference but she will receive phones calls for those who don’t have Web access at 518-564-0506.

Debra also urges Medicaid clients who have any complaints regarding any transportation issue to contact the North Country Center for Independence, (518) 563-9058.  NCCCI  can also answer any questions about the  meeting.

Stress – both financial and personal – has compelled changes at the ROTA Gallery and Studio.

It's been noticeable lately that activity has slowed down at the art co-op.  Fewer music events.  More afternoons being dark, the CLOSED sign hanging in the window.  Was the group suffering from entropy?

Difficulties pop up easily for a not-for-profit organization operating with unpaid volunteers while lacking stable sources of funding.

Last Wednesday evening I sat in (as a observer in the background, to be precise) at a membership meeting which discussed the problems ROTA faced.

A new Board of Directors was elected including Jenn Allen as president.  My quick impression of Jenn: young (especially compared to this aging blogger), energetic but focused.

She and others at the meeting offered solutions.  Jenn said that there was a problem with board members suffering from stress from taking on too many responsibilities.  She suggested that there should be activity coordinators handling the more immediate details with the board providing overall guidance.  This division of duties would help to alleviate burn out.

Burn out?  With an easy-going and fun organization like ROTA?

ROTA involves much more than just fun, hanging around and enjoying music and art shows.  Planning and presenting such activities involves Work.  Previous board members were trying to hold down regular jobs, keeping their own personal schedules and budgets under control, let alone ROTA's.

ROTA has reached out to young people by offering all-ages music shows – DAMN LOUD BANDS!, yes, in many cases – but no drugs or alcohol allowed.  Plattsburgh City still lacks a youth center but had the money to beef up its police department even more.  Apparently policing and prosecution are preferred over prevention.

Despite offering a positive alternative to hanging around on the streets, attendance has been dropping at the all-ages shows.  To help pay for the bands, especially the ones on tour, ROTA charged an affordable sliding scale for donations, $3 - $10.  But even that didn't keep the crowds coming.

There's a story a ROTA member helped to pay for a band's expenses out of his own pocket after one low-attendance show.  From what I know about the situation that generosity couldn't continue unless he won the lottery.  He has his own expenses to meet.

Recently ROTA made its monthly rent but only through a considerable donation by a community member.

Previous to the general meeting there was talk that to bring its budget under control ROTA might move to a cheaper space or even try to function without a physical center.

A lot would be lost if the group had to give up its present downtown location at 50 Margaret Street.  The main street spot provides more visibility, is easier to find than its former location tucked in on a side street.

And there's the donated piano available for lessons and concerts provided through the efforts of musician-composer Adrian Carr.  The space is a good set-up all around.

While I sat in during part of the membership meeting I didn't hear any discussion related to keeping the present space.  That and other issues such as funding sources and whether to maintain ROTA as both an art and community center still have to be discussed.

As ROTA President Jenn Allen explained in an email, responding to a couple of questions I had after the meeting:

"We will continue on as we have been for now, and any changes in focus will be discussed over the coming month with the new Board and Coordinators. We are currently both an art gallery and a center for community activities, but our priority is the mission of ROTA and the furthering of art, music, and creative culture in Plattsburgh."

She noted that the new leadership had just started and that they would know more in the next couple of weeks.

ROTA moves on, going through another transitional period.

On November 29th at 7 PM it will hold a benefit show with local musicians.  More info can be found at the ROTA Facebook page, https://www.facebook.com/rotagallery.

So the bands play on.  And not in the Titanic sense.

Comments can be posted below or emailed to luketbush@gmail.com . 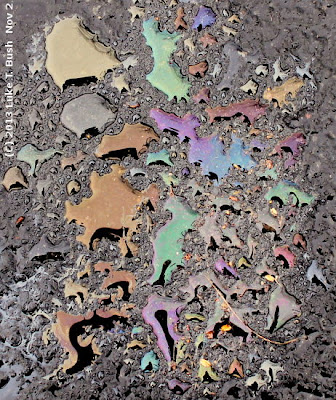 The line-up of handmade cardboard signs across the street caught my attention.  Another demonstration site was set up in Trinity Park.  I noticed a solitary activist holding a rainbow-mosaic umbrella as she waited for others to show up.

I took some shots.  Intrigued, I crossed the street, not worried about jaywalking or traffic. City Hall Place was blocked off for the local First Weekend events.  Yesterday was sunny but the high winds interfered with the activities.  Today interference was being provided by gray skies, rain, and cool temps.

I spoke with the alone-so-far activist, Rachael Chrestler.  She explained that she was participating in an international campaign called "March Against Corruption."

According to the March Against Corruption Website the campaign was "a worldwide effort to eradicate the corrupting influence of money and special interests in public policy making."

As I scribbled some notes Rachael said that too many citizens are intimated, afraid to speak out on issues.  For example a mother with her child had walked by a while ago, the mother expressing disapproval towards the demonstration.

While Rachael was too young to vote when President Obama was first elected, she did support the policies that he had been espousing.  But that support changed when there was talk about direct US involvement in the Syrian conflict.

Using the Internet she found information that caused her to question the president's other policies such as allowing the NSA (National Security Agency) to invade the privacy of many citizens through its massive telephone-Internet spying programs.  She thought Obama was a puppet, not an independent leader.

Rachael was also concerned with the talk about FEMA camps, a program that some people say will round up many citizens during civil disturbances under the guise of the Federal Emergency Management Agency.

Pointing to the peace symbol on one of the signs Rachael said she is trying to promote peaceful change through raising awareness of issues that citizens shouldn't ignore.

Wrapping up the interview I told Rachael I would like to photograph the white mask sitting on the park bench, a stylized plastic image of Guy Fawkes.  I recognized it from the graphic novel and movie, "V for Vendetta," an image made popular by the activist group Anonymous.

Instead Rachael offered to pose while wearing the mask.  It made an interesting shot, especially with her polychromatic umbrella. 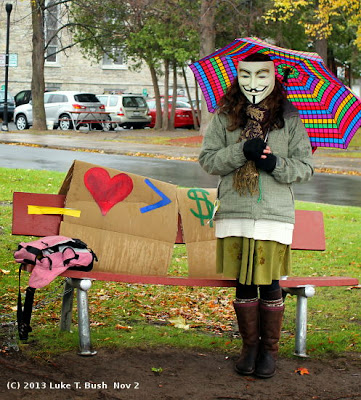 Some time later I wondered if she was aware of the New York State anti-mask law, a topic I had written about before at my blog.  If you read the law you will learn that free speech applies to Halloween but not activism.

Hard To Save Face...

...when you're dip molded into a Halloween-appropriate countenance. 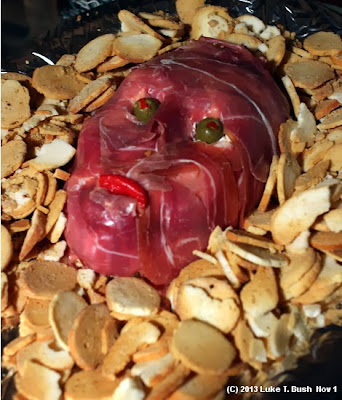 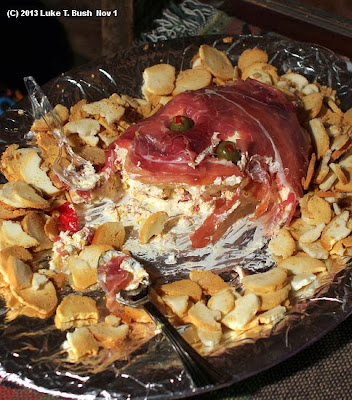 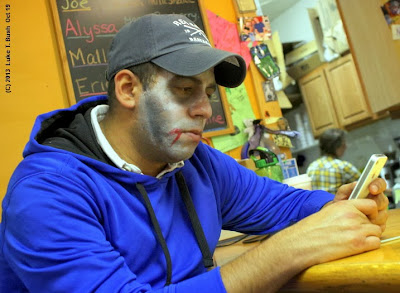 What else would a zombie use?

Don't Judge A Book By Its Cover 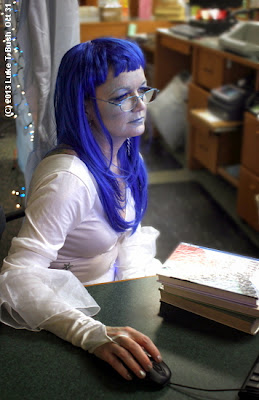 This seemingly cold and calculating character actually has a warm heart.  For Halloween Jody Helfgott, Principal Library Clerk at the Plattsburgh Public Library, dressed for the occasion as the supervillainess Killer Frost.  No need to contact Superman and Batman to put the heat on her.