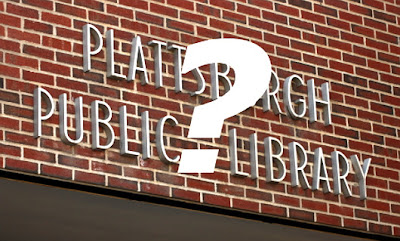 A wall of blinding white light.  No sounds or smells.  A feeling of calmness, that's the way life just is, you're born to have all sorts of experiences and then you die.

That's how local singer-songwriter Chris Rigsbee describes his near death experiences, the last one during a car accident that left him with a totaled vehicle, bruised ribs, and a concussion.

Chris explained how traumatic events had influenced his life and art during a sit down interview last week at the ROTA Gallery.  Among his friends and fans he is known by the stage moniker of Adrian Aardvark.  Joining the interview was Matt Hall, ROTA Vice President and also co-producer of Chris's upcoming album, Hidden Magic Revival.

Besides the car accident in September, two years ago Chris and his girlfriend were the victims of an early morning assault by a group of college-age men in Plattsburgh City.  Chris was stomped into the pavement, gravel embedded in his gums, and he lost three teeth.  As detailed at this blog what should have been a case of a hate crime and gang assault ended up with only one person found guilty of a mere disorderly conduct charge.

Dealing with depression, Chris was beginning to recover from that brutal attack, starting work on a new album back in February with Matt Hall, recording material in Matt's apartment studio.  He was also attending college, things were flowing along but -- BANG! -- right at the start of the fall semester, the on-campus car accident.

"As terrible as certain things were," Chris said, "the car accident and the assault, they really helped me shape up.  It was like, 'That's the first part of my twenties, now I really need to live life.'"

His spirit reborn, Chris dropped out of college and later left his retail job at the mall to concentrate on music, creating his own and working with other artists on various projects.  On November 30th ROTA will host a performance of Hidden Magic Revival in its entirety with a supergroup of local musicians who helped with the album.

Matt explained that the album in one way is like a mainstream studio production in that the lead performer performs his tracks first and then other artists are added to the mix afterwards.

"We recorded all of Chris's guitars and vocals together like live," continued Matt, "and then [the other musicians] were overdubbed, all of them were an afterthought.  We had ideas we wanted but all those parts were written by the musicians well after the songs were written."

For example, Chris and Matt knew someone who played trumpet and so they would drag him back to the studio to add a track.


Chris greatly appreciates the help provided by his friends on the album. "One of the songs I never recorded ("Weird Sweetness"), I thought I couldn't do it justice, but with the musicians and working with Matt Hall on recording those sounds and everything, in arranging them in such a way it does do the song justice."

Chris noted that major themes in his work deal with relationships.  Relationships with love, violence, life and joy.

"This album is about my renewal," he said, "my happiness, my staying away from certain things like drugs and overuse of alcohol, overcoming the self-destructive actions and thoughts I was having for a very long time in my life."

Describing the new clarity in his life, Chris summed it up: "I'm trying to focus on this art, this side of me that was so strong [but] I just neglected.  It's definitely a rebirth."

Hidden Magic Revival will be performed live on Friday, November 30th, at ROTA Gallery, 50 Margaret Street.  There will also be an arts auction with Adrian Aardvark themed works, food catering by Riff Raff, and a Q&A after the performance.  Doors open at 6 PM with a sliding scale admission of $3 - $10.  More info: www.rotagallery.com .


The headline reproduced below appeared in a half-page ad on page A10 in the Thursday, November 15, 2012 edition of the Press-Republican.  A good organization like Hospice of the North Country deserves better than this.  (Click on image for magnified view.)

The person who let this go by should see an ophthalmologist at EyeC are fort heA dirondacks.

And this isn't the first time this kind of mistake has been made as evinced by this previous blog post.

Hear that sucking sound?  That's Community Newspaper Holdings, Inc. down in Alabama sucking all the worth out of the PR.  There are good people at the PR but their efforts are being undermined by CNHI cutting the operation down to the bone and then some, right into the marrow. 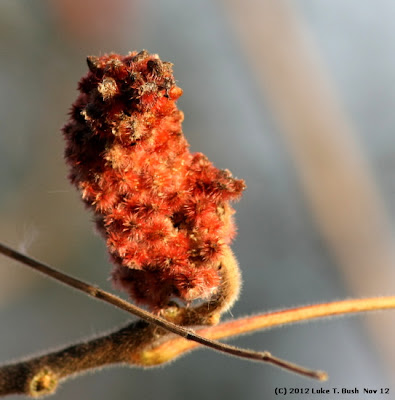 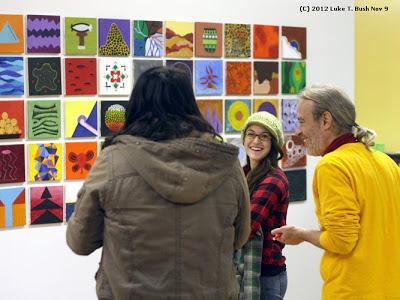 Artist Walter "Gator" Dunnington (right) discusses his work with two patrons during the opening reception for his exhibit at the ROTA Gallery.

After being nearsighted most of my life, stuck with Coke-bottle-bottom eyeglasses, I grok how lenses can simply detail or bend reality.

Friday evening I was wandering around the ROTA Gallery, taking a few shots of the opening reception for the artist Walter "Gator" Dunnington.  The exhibit features paintings inspired by an eclectic range of sources, from puzzles to Mimbres pottery to the stylings of comic book artist Jack Kirby.  I noticed how an eyeglass lens of an attendee was providing an unusual POV with one piece. 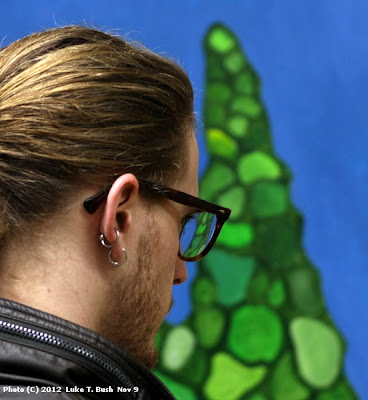 Sunday evening there was a music event at ROTA and once again I spotted an unusual POV of the same exhibit, this time provided by a bespectacled listener in the audience . 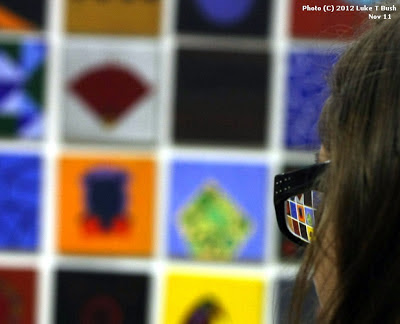 Is focusing on the image within an eyeglass lens weird?  Kinda.  But let me invoke the standard excuse: I'm an artist.

The Dunnington exhibit will run for about two weeks.  ROTA is located at 50 Margaret Street in downtown Plattsburgh.  Depending upon volunteer staffing, it is open daily from 12 to 5 PM.  More info at www.rotagallery.com . 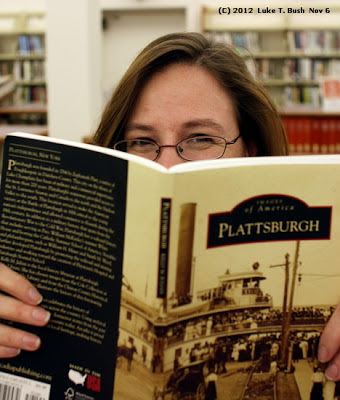 After months looking over her manuscript for accuracy, somewhat camera-shy author Kelly Julian looks over a copy of her recently published book, Images of America: Plattsburgh.  With her background as Reference/Local History Librarian at the Plattsburgh Public Library, Kelly selected documents and images from the PPL and Clinton County Historical Society collections to highlight key events and people in Plattsburghian history.

There will be a book signing by the author on Thursday, November 15, 2012 at 6:30 PM in the PPL auditorium.  Kelly will share some of her research with a PowerPoint presentation. 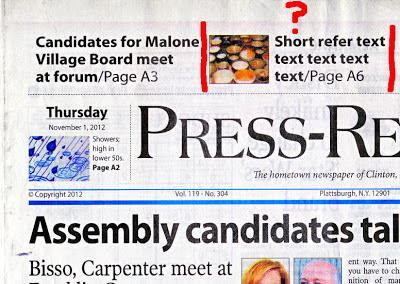 And to add to the goof, the photo and related article were on Page A7, not A6.  Getting your money's worth?

ROTA Studio and Galleries sponsored a family friendly Halloween party Wednesday evening in cooperation with the advocacy and support group NAMI-CV (National Alliance On Mental Illness of Champlain Valley).  A magician had set up shop to demonstrate his paranormal powers of prestidigitation. 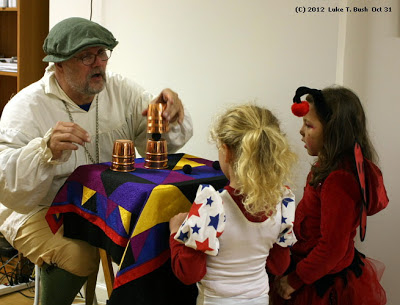 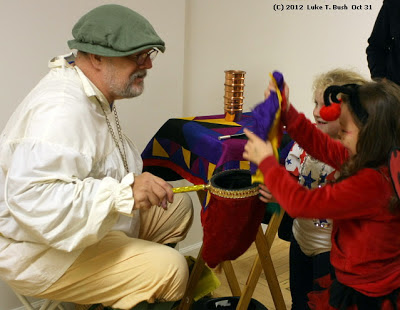 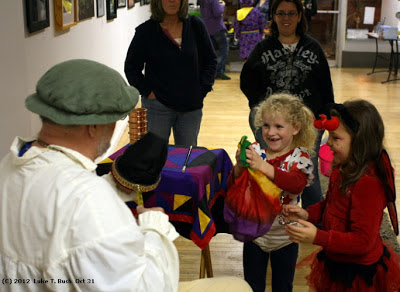 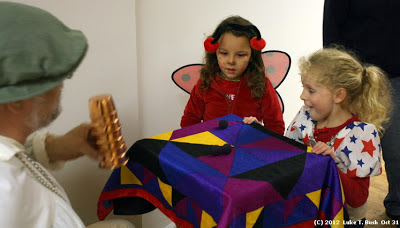 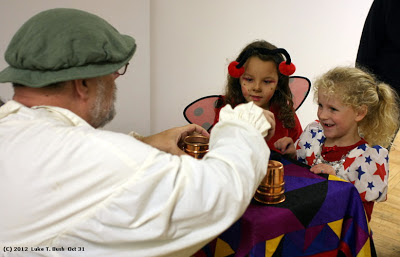 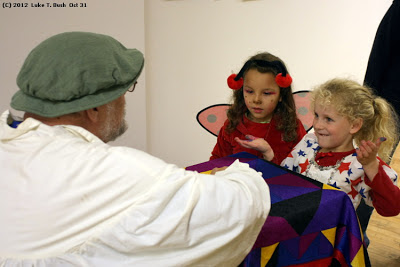