The Future Of Television!

You were stuck with rabbit years, a pair of long metal rods connected to the set that could be adjusted as needed for that perfect fuzzy signal. The rabbits ears telescoped so that you could shorten and lengthen each one as needed. If that didn’t work, you would raise and lower the rods or swivel them into different positions to pick up a semi-viewable picture.

And then there was the last resort: wrapping aluminum foil around the rods to squeeze out a bit of gain.

But forget all that. Like they say, the future of television is here! Have you noticed how digital has made most things better? Well, the same applies to over-the-air TV viewing. Better picture, better sound. DTV is the best. And anyway, you better fall in line because in February 2009 they’re shutting down all analog broadcasts. That’s what I like about the US of A: freedom of choice.

Of course, the DTV pushers don’t mention that unless you have an outdoor antenna, you’re probably screwed. I live in an apartment so forget about any outdoor pick-up device, including a satellite dish. Anyway, why should I pay for satellite or cable service (at rip off rates) when I can enjoy FREE TV?

I bought a converter box for my analog TV set and it has been a joy. Instead of a fuzzy signal, I now end up with a black screen with the logo NO SIGNAL floating around or weird abstract art formed by jumbled pixels frozen on the tube. 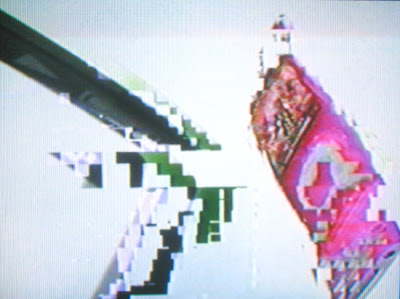 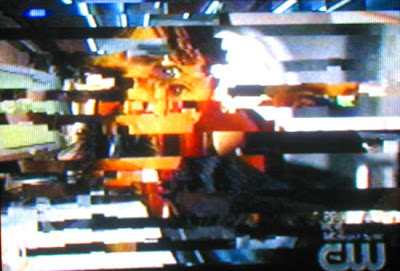 And the sound – it’s so much better. When the audio cuts in and out, it’s like listening to a psychotic extraterrestrial:

I’ve spent many enjoyable hours trying to get all the stations I had received before in the analog format. No go. The trade off is that the ones I do pick up aren’t fuzzy, they do look better, but only when weather conditions and the mood of the gods are both in my favor. The reception is so fragile, tenuous. The other day geese in a vee formation flew over. One of them farted and I lost channel 44.1 .

But I discovered something of a solution. I noticed that when I stood behind my antenna, the signal picked up but faded as soon as I walked away.

Then an answer from the dark days of broadcast TV came to me, albeit in a modified form. 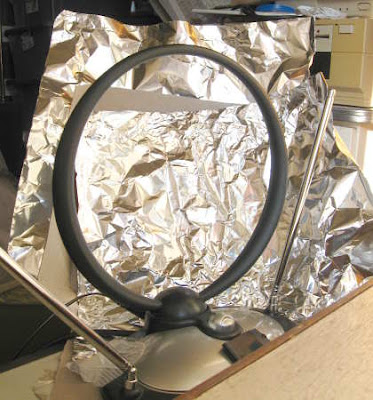 I took a cereal box, cut it up and configured it into a half-ass stand to hold up two pieces of aluminum foil behind the antenna. An elegant solution.

The future of television.

Someone with guns for sale nailed a handmade sign into a tree near Plattsburgh City Hall. I’m no tree-hugger but it seems to me that pounding galvanized roofing nails into a tree doesn’t prolong its lifespan. 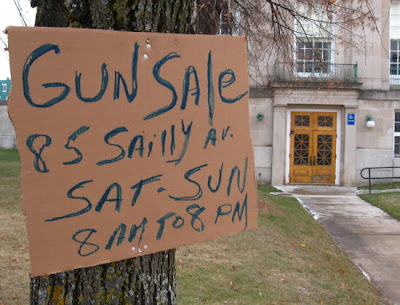 How will the city police be able to locate the perpetrator? 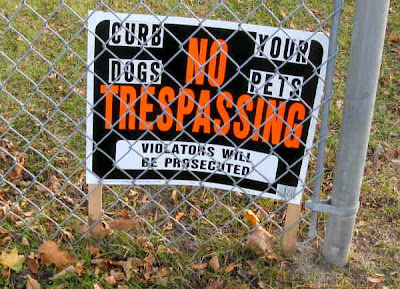 Walking along, camera on hand. The sun occasionally peaks out from behind the clouds, illuminating leaves still treebound or fallen, transforming them into colorful images. Kids play soccer on the field behind Seton Academy, the Catholic elementary school. I notice a sign at one of the entrances and take a couple of shots.

Pausing from playground supervision, the principal of Seton Academy, Sister Brian Marie Latour, walks over and asks me why I was photographing the NO TRESPASSING – CURB YOUR DOGS sign near the schoolyard athletic field. I mention my blog to her, how I have been documenting litter problems around the city.

Sister Latour explains that the sign had to be put up because of inconsiderate dog-owners; the problem was getting out of hand.

I agree with her. Healthy kids shouldn’t have to play in dog crap. 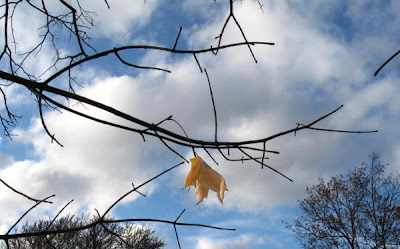 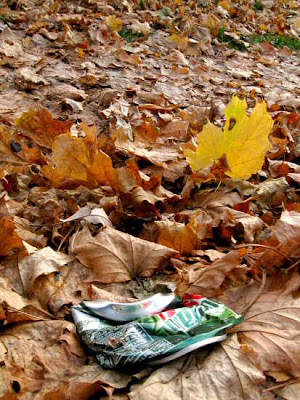 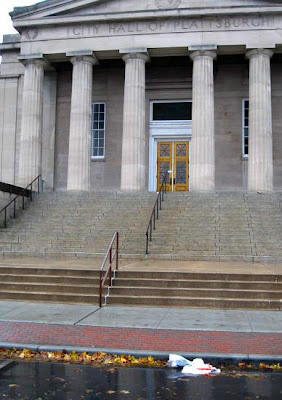 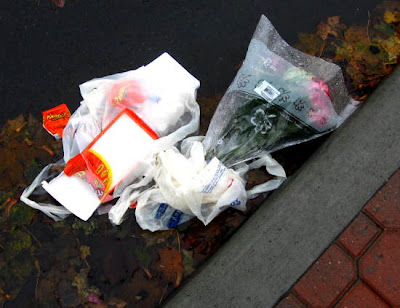 If you're going to say it, say it with flowers. 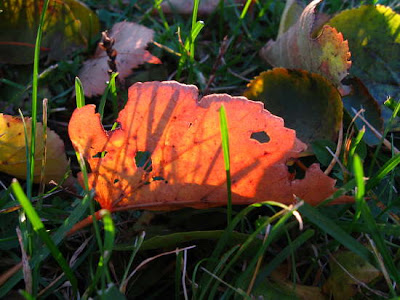 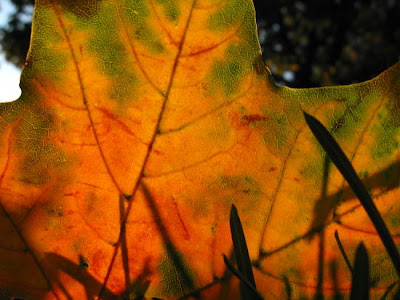 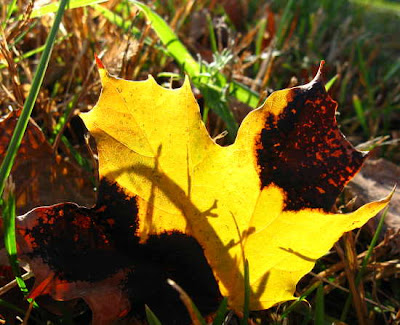 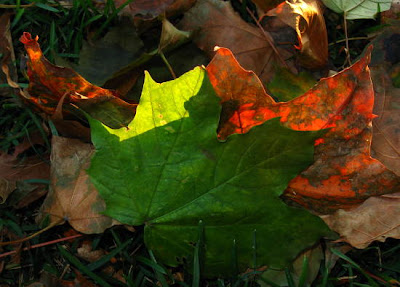 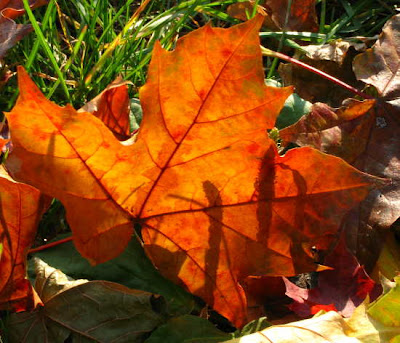 Citizenship and the DPW 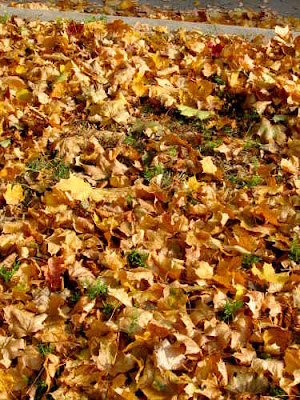 What’s notable about the accompanying image is what isn’t there.

Everyday I would walk by this spot and notice the problem was still there, not getting any fresher. By day 5 – Election Day – I decided to call the City of Plattsburgh Department of Public Works. Apparently people who lived near the problem or even parked next to it were too busy to notice, or if they were aware, indifferent. Even though it wasn’t in my immediate neighborhood, I decided to do what others should have done.

A quick look-up for the DPW number in the phone book, one short call, and the problem was gone by the next day. Kudos to the DPW.

In the scheme of things getting a decaying cat carcass hauled away isn’t much. But there is more to citizenship than pulling a lever in a voting booth once a year.

What: Dress up as a Batman character.

Where: Plattsburgh Public Library. The circulation desk is transformed into the Batcave.

Why: Halloween. (What else?) 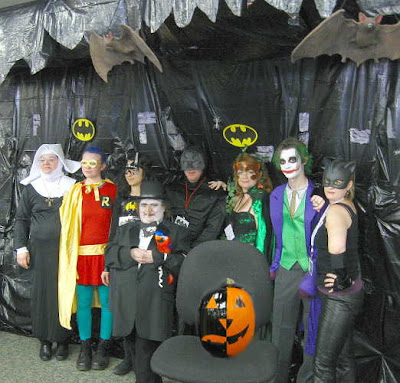 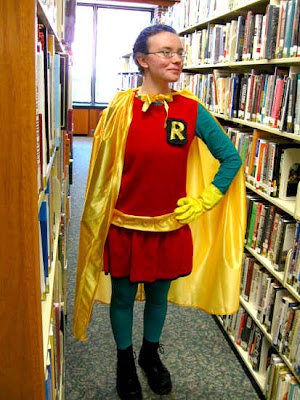 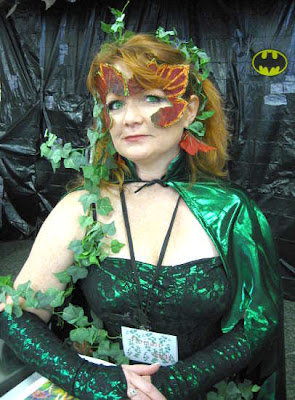 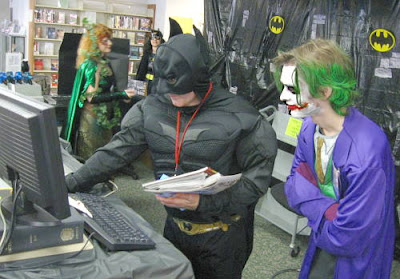 The Joker shows Batman how to use the Screwy decimal system on the Batcomputer. 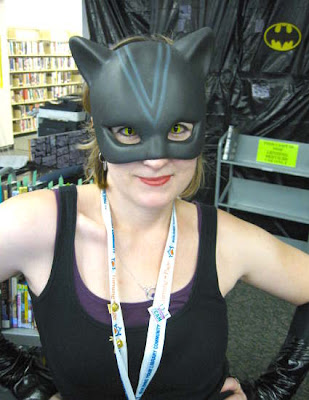 Purrfect pulchritude (but slightly cross-eyed. Too much catnip?)

Superhero no longer means super zero. What was considered uncool is now hip.

Reading comic books – especially in your teen years and after – was once looked upon as an activity to be shunned for the sake of humanity. Ostracism was guaranteed for anyone who followed the deeds of Superman, Spider-Man, Batman, et al.

A textbook in my high school business class discussed how to properly evaluate a company employee. If the candidate read comic books, obviously they were brain dead and should be let go. It was implied a comic book reader couldn’t answer a telephone. And death and destruction would surely ensue if such a lowbrow operated heavy machinery.

Comic books mean semi-illiteracy, an askew mindset. The medium even smacked of depravity. Decades ago imaginative fiction – especially if it was in the graphic panel form – was the bastard orphan of literature.

In the modern world they wrap the same kind of material, even goofy superhero tales, into a “graphic novel” format and it’s worthy of serious literary criticism and appreciation. Graphic novel readers can answer phones and even operate heavy machinery.

Thanks to the Hollywood movie machine it’s OK to spend $8 to watch someone run around in tights. Back in the old days spending 12 pennies on a Spider-Man comic book was a waste. Collecting baseball cards with incomprehensible and inconsequential stats in fine print on the back – that was normal.

Superheroes, science fiction, fantasy – it took decades for the public at large to realize that such stuff could have value. I was many years ahead of the curve – and paid for it.

Then again, popularity was never my thing.