Apparently Channel 5 viewers come in all shapes and sizes.

Tuesday evening representatives of WPTZ, the Plattsburgh-based TV station, held an open forum with the public in the Plattsburgh Public Library auditorium.  In attendance was a large but quiet dog dutifully held by its owner via a leash.

Unfortunately the friendly canine didn't bark any comments during the town hall meeting.  Maybe he was upset with the quality of dog food commercials aired on the station.  We'll never know.

While there was a dog there was no pony – unless WPTZ meteorologist Tom Messner counted as one.  He opened up the town hall meeting with an overview of Channel 5 history with a PowerPoint presentation featuring photographs he had taken over the years while employed at the station.

Tom was personable, affable, ever-smiling as usual.  He cracked a few jokes that the audience found funny.  As an ice breaker it was an effective presentation but if it was intended to completely mollify everyone it didn't work.

The main complaint heard during the gathering was one that has been raging for decades: WPTZ covers too much Vermont news at the expense of New York State coverage.

One woman in the audience mentioned that last May Clinton Community College had its largest graduating class but Channel 5 News only covered college graduations in the Burlington, Vermont area.  Recently college students have returned but, according to the woman, WPTZ has provided no coverage of colleges in the Plattsburgh area.

WPTZ President and General Manager Kyle Grimes addressed the issue by using a laser pointer and a PowerPoint image of a regional map.  He said that the Vermont market had the many more viewers and so the station's news coverage reflected that fact.  He understood the complaint but the market was what it was.

What wasn't said in so many words was Channel 5 is a for-profit entity, its existence based upon revenue from ad dollars.  Obviously Burlington and its surrounding communities are going to generate more income for the station.  So while some complain about the bias towards Vermont events – and I'm one of them – the truth is that the situation is never going to change.

Before the meeting I briefly spoke with the WPTZ GM and mentioned that I don't watch Channel 5 news.  One reason why was expressed by a few in the audience who said that they preferred to watch the competing TV stations for local news, even though those stations are based in Vermont.  After all, if you're going to watch Green Mountain State news, might as well watch it on a Vermont station, especially when that station seems to pay a little more attention to this side of Lake Champlain.

No one mentioned my other reason for not watching Channel 5 news but I've heard others make the same complaint: the incessant bragging through repetitive promos for its local news shown 24/7.  After hearing how great the Channel 5 News Team is for the nth time I don't want to look at their sickening faces.  Competitors Channel 3 and Channel 22/44 each promote their own news without all the extreme fanfare and bombast.

(A station contact flyer provided at the meeting notes that Promotions & Public Relations are handled by a Mr. Brian Damm.  So if you're annoyed by WPTZ news promos you can shout at your TV: "Damm stupid ads!")

And I didn't have a chance to say to the WPTZ reps that there's still a major misspelling in a story at the station's website that talks about an archaeological dig at "Pike's Contonement" [sic].   I make mistakes but it's not because I'm too lazy to use a spell check program.

There's no excuse for not using spell check.  It's quick and easy – simple enough for either a dog or a pony.  Or even Tom Messner.

Artist Seen Through His Work 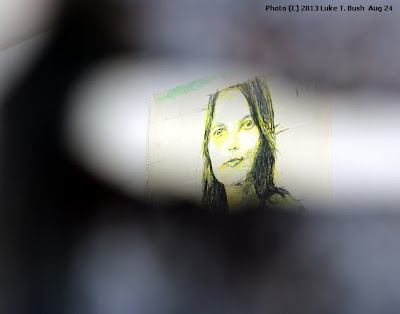 The opening reception at ROTA Saturday evening featured various creations by William Tavish Costello, an artist who was one of the founders of the co-op gallery.  He returned from Hague, NY to share some of his works: paintings, drawings, photographs and metal sculptures.

The sculptures provided interesting POV's into his works if you knew where to look.  Call it artistic peer during an opening opening. 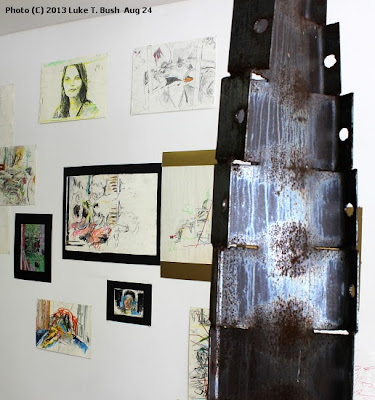 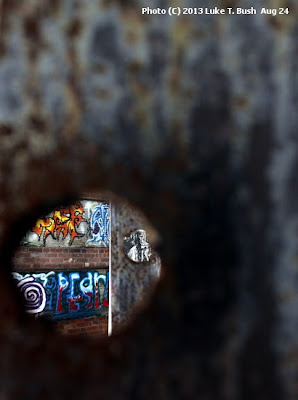 ROTA Gallery is located at 50 Margaret Street.  Depending upon volunteer staffing it is open daily from 12 Noon to 5 PM.  More info at http://rotagallery.org/ or email rotagallery@gmail.com .

The Press-Republican has published articles and editorials warning readers about telephone scams, especially those aimed at too-trusting senior citizens.

So why is your Hometown Newspaper running a dubious display ad?

There's a half-page spread on the bottom of page A9 in the Wednesday, August 22, 2013 edition touting "a real memory pill," i.e., a pill that will improve the failing memory of an aging mind. At first glance to someone not paying attention it looks like a news article complete with a headline.  But check at the top of the spread where it says in small print: "Paid Advertisement."

The ad goes on about the wonders and benefits of this great medical breakthrough (a real memory pill!).

To quote: "First, the formula was submitted to the rigors of a placebo-controlled, randomized, double-blind clinical trial, using the same FDA-sanctioned brain testing protocols used to qualify prescription-sold cognitive medicines."

Sounds impressive.  But note the ad invokes the name of the FDA but only by saying the clinical trial used the same FDA protocols.  It wasn't actually tested by the FDA.

Then there's this statement about the clinical trial: "Then, the results were shared with the world in a well-respected, peer reviewed medical journal."

Ahem.  The name of that journal...?  Reporters and writers cite their sources.

Also, reporters try to use full names – easier for someone else to verify sources.  But in the ad testimonials are given by people with incomplete appellations: "Cary S." and  "Elizabeth K."  It reminds me of other dubious ads I have seen in the past.   A careful reader will note that after each quote by an exuberant customer is an asterisk, indicating a footnote linked to that statement.


It's important to read that footnote contained in a box in the lower right hand section of the ad.  Some readers might have to squint to discern the fine print which states:

"*These statements have not been evaluated by the FDA.  This product is not intended to diagnose, treat, cure or prevent any disease. Everyone is different and you may not experience the same results. Results can depend on a variety of factors including overall health, diet, and other lifestyle factors."

If the product is not intended to "treat, cure or prevent any disease" then how can it be a "real memory pill?"

Such wording implies there's no guarantee of the product's effectiveness, ergo little chance someone could successfully take legal action against the company.  Or even get a refund.

If a reporter used the same kind of weasel words in a story he would be fired.  There are standards in journalism.  And newspaper ads should also reflect standards.  Readers trust a newspaper to be as accurate and as fair as possible, not to engage in or condone rhetorical tricks just for money. 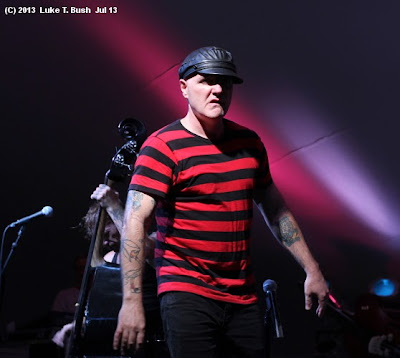 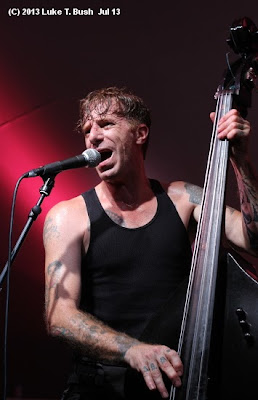 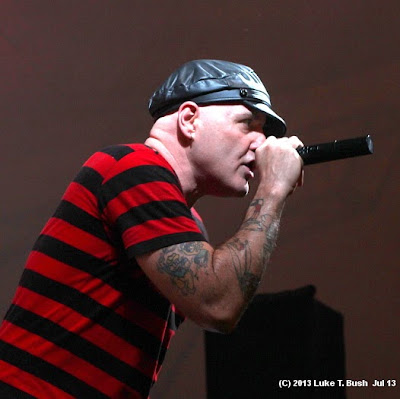 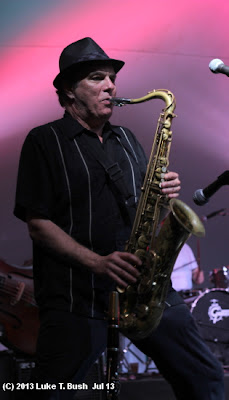 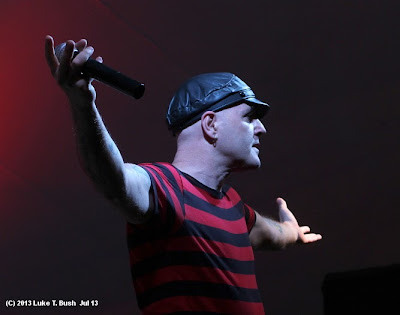 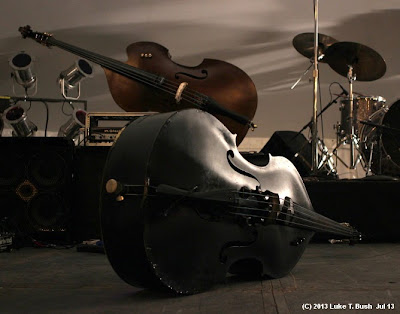 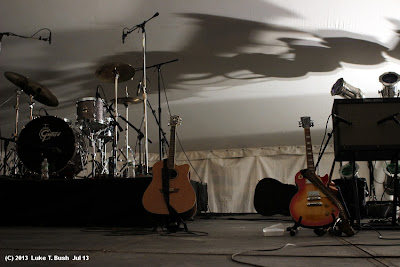 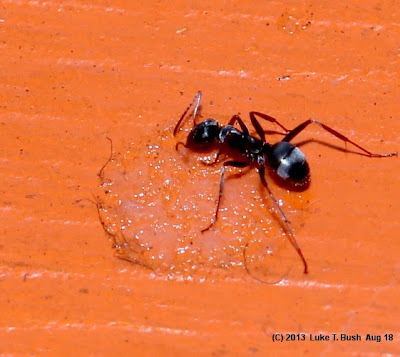 Sugar crystals, that is.  (Maybe this could be the basis for a TV series called Breaking Bug.) 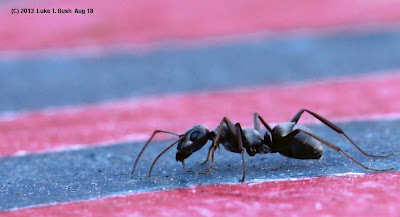 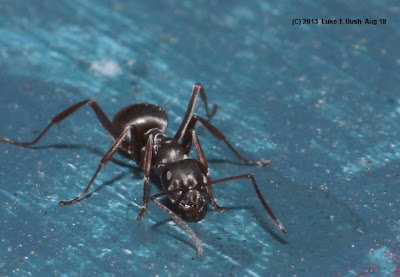 An Evening For Folk Music

The ROTA Gallery event featured solo performances by two musicians from Syracuse, NY: Surly Dylan Suttles and Bridge Under Fire.  A surprisingly non-surly Suttles performed his original compositions, one based upon a story by a writer of fantastic fiction, HP Lovecraft.   Then Bridge Under Fire offered raucous tunes with his hard-edged vocalization, a sudden contrast to the quieter style of Suttles.  The evening wrapped up with local musician Justin Passino (AKA For The Kid In The Back) who also performed with great energy, sharing songs inspired by trying and angry moments in his life. 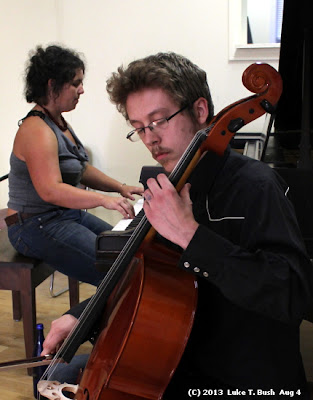 Pianist Kimberly LeClaire accompanied by cellist Chris Dandolar performs at the Sunday evening music show at ROTA Gallery.  It was the first time they had played together in public. 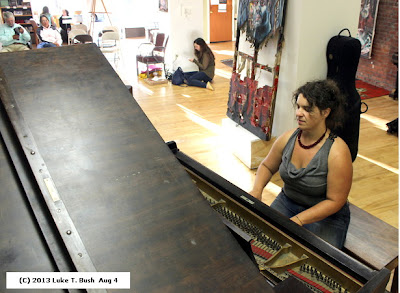 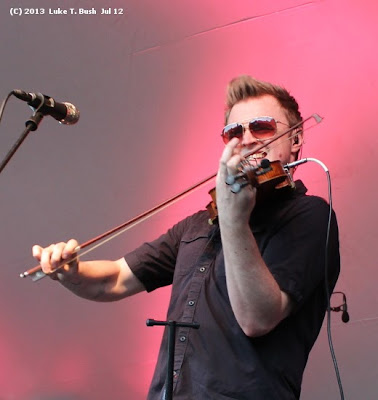 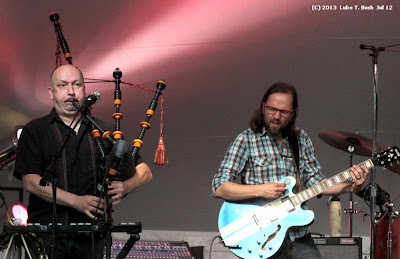 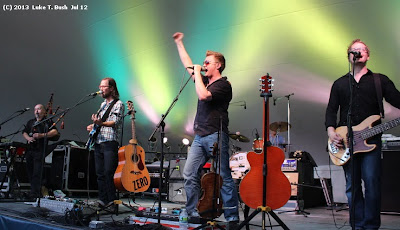 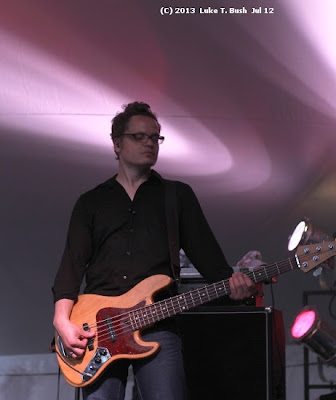 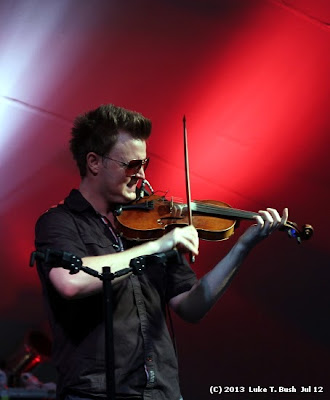 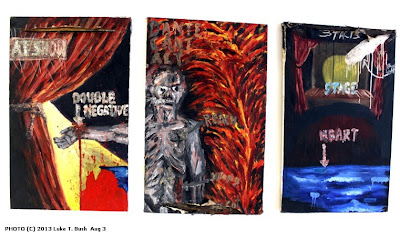 "I wouldn't hang that in my home."

That reportedly was one reaction to the latest art exhibit now on display at ROTA Gallery featuring works by Jason Andrew Torrance.  Entitled "Bone" it features intense images that were never meant to decorate a family room (unless it was the Manson Family).

While someone can prefer certain types and styles of illustration art is not limited to only to pleasant and upbeat subjects as evinced by this exhibit.

Depending upon volunteer staffing ROTA Gallery, 50 Margaret Street, is usually open daily from 12 Noon to 5 PM.  More info about its art and performance events can be found at www.rotagallery.org or calling (518) 310-0205. 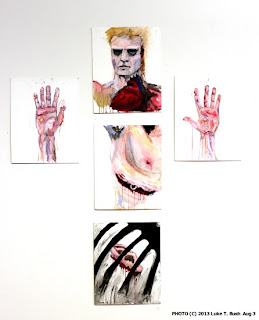 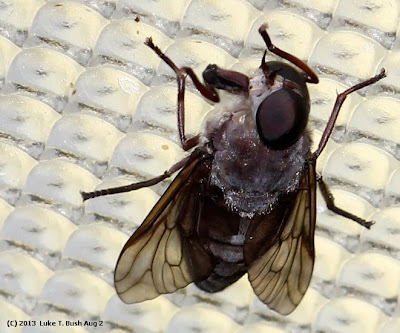 I found this large fly (or fly-like critter) hanging upside down on the plastic cover to a fluorescent ceiling light.  I'm not an entomologist but it seems this fly – despite its kind being known for carrying germs – is cleaning itself.  Even a fly can stand so much dirt.