Governmental official.  Or someone who claims to be one.

Better ask for credentials.  There's all sorts of stories out there about individuals passing themselves off as official representatives to get what they want.  Did you hear the story about the private investigator who needed a urine sample for DNA testing from the target of his investigation?  He got it by knocking on the person's door, saying that he was from the Health Department and that there was a problem with the water system.

Such acts of impersonation are called pretexting.

Normally strange visitors are who they claim to be but you never know.  The urine specimen story happened elsewhere but pretexting can happen anywhere.

Locally some people have alleged that a Republican candidate passed himself off as Clinton County Board of Elections representative while investigating possible fraud with certain absentee ballots.

Two separate investigations, city and town, were initiated by Republican Party members.  In the City of Plattsburgh (COP) the municipal police interviewed a number of people including WFP volunteers who canvassed for the absentee ballots.  Some are taken to the station for questioning.

Named as respondents were Susan Castine and Greg Campbell, as Commissioners of the Clinton County Board of Elections, and Michael Cashman and Paul Lamoy, as Candidates for the Public Office of Town Council, Town of Plattsburgh.  (Cashman and Lamoy ran with endorsements from both the Democratic and Working Families parties.)

Some absentee voters were subpoenaed and had to appear in Court.  This meant taking time off from their jobs and family duties.

In his decision dated January 21, 2014 the Honorable John T. Ellis, J.S.C., ruled that some of the ballots were invalid but also found no wrongdoing by the respondents in the petition.

(A scanned PDF copy of his decision can be found here: https://app.box.com/s/1sc0qkubq0ibc808huoy .)

"Initially, the court notes that there was testimony from some of the voters to indicate the petitioner went door to door stating he was from the Board of Elections and he wanted to ask questions about the absentee ballots filed by various voters.  The information he gathered then was placed into the affidavit supporting the Petition before the Court."

Regarding the alleged activity Judge Ellis stated the Court didn't make a finding and wasn't required or requested to make one.

He continued: "Without deciding whether or not [the allegation] is true, the Court doesn't want to encourage investigations by candidates claiming to be from the Board of Elections in order to elicit information about the voters' personal lives to substantiate reasons to invalidate absentee ballots."

Besides being a TOP councilor Tom Wood also serves as Clinton County Chairman of Working Families Party.  In a phone interview he told me he heard the testimony from absentee voters and had also spoken with voters outside court who stated that a candidate was passing himself off as an official from the Board of Elections.  He added that to pursue the truth behind the allegation would have involved spending money that he and the Working Families Party doesn't have.

I find it ironical that absentee ballot voters, common citizens, had to testify in court while the candidate who initiated the action isn't required or requested to testify about his alleged pretexting.

But that's how the system works.  No $, no chance of getting to the truth, good or bad.

For example, imagine how much its costs to test DNA in a urine specimen.

NOTE: In an article scheduled for the first issue of the alternative newspaper, UnderCurrents, Working Families Party member William Cowan will provide more details about the absentee ballot investigations.  Email for more info on UnderCurrents: editorundercurrents@primelink1.net . 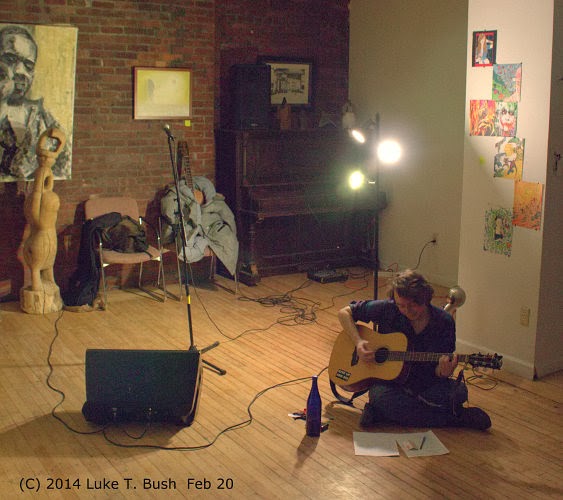 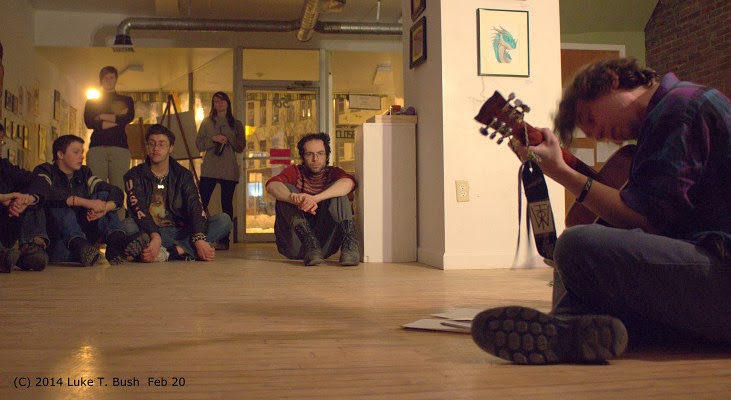 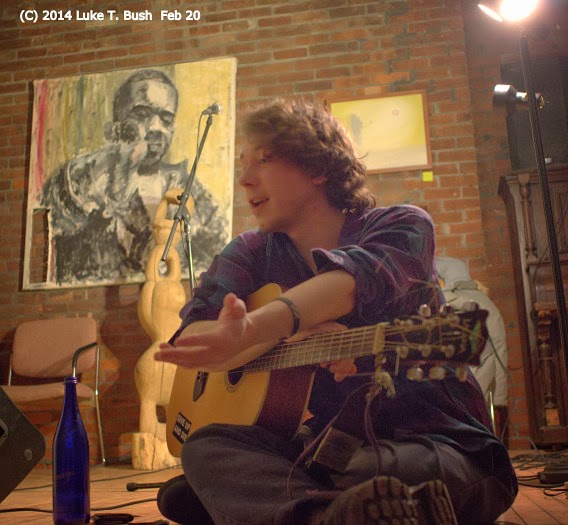 Daniel Gelinas  (You, Yourself & I) 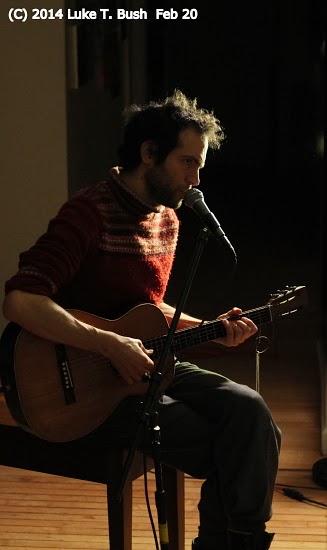 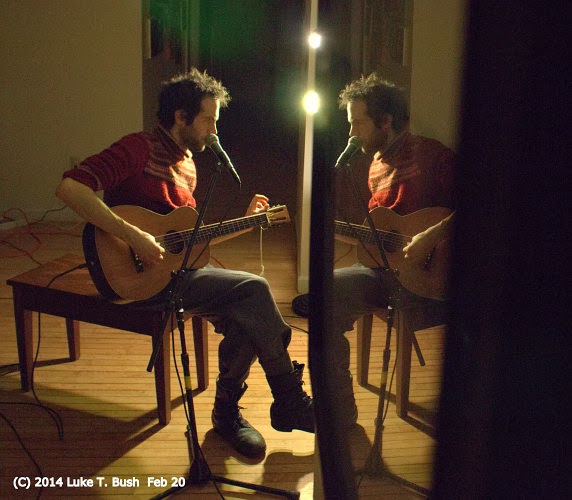 Justin Passino  (For The Kid In The Back) 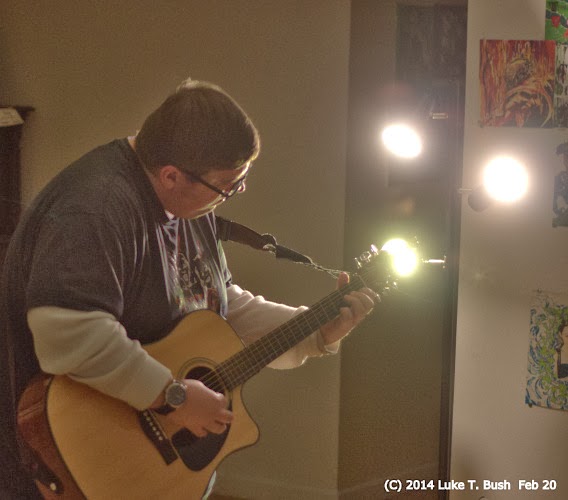 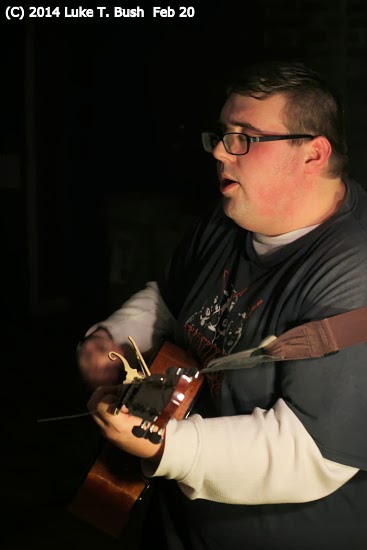 Plattsburgh Newspaper Going To The Dogs

Your newspaper is dying, dwindling readership, ad dollars.  What can you do to reverse the decline?

Maybe give readers a reason to pick up the paper.  How about investigative reporting?  Looking into those stories heard on the street, getting to the truth, sorting the scat from the candy.

Nah.  That would involve reporting, acting like a real newspaper.


Instead hold a Top Dog contest.  Invite readers to submit cute photos of their canine companions.  A fun feature that won't generate controversy.  Investigative reporting — that could mean hurt feelings, bad things said.  Can't have that at your sleepy paper.

Let the readers do most of the work, providing free content that could potentially be exploited for more profit by you.  Unless they click on that one link they won't know that they're signing their rights away. To wit: "If you submit any information to us... you are giving that information, and all your rights in it, to us free of charge... [the information] may be used by us for any purpose, without your consent or any compensation to you or anyone else."

So if the paper needs a goofy dog shot for an ad, no need for a pro photographer, just use one submitted by a reader.  In fact let the readers create most of the content for free and reduce your pro staff to part-time wage slaves.

But won't such a move mean a lower quality newspaper, a continued drop in readership?  Well if you keep cutting you can maintain a profit.  That's what the big brains at the Head Office and the stockholders think. 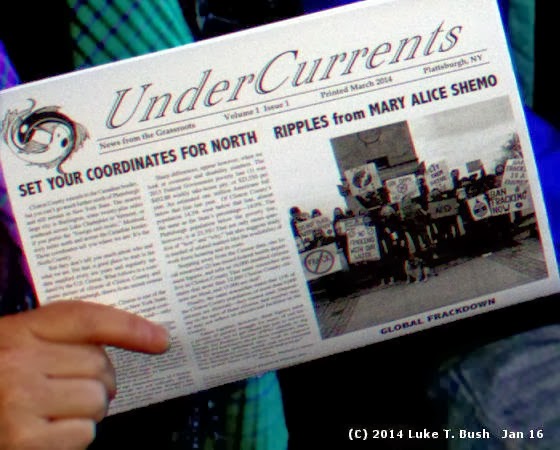 A participant holds a mock-up of a forthcoming North Country alternative newspaper.  Coordinated by activist Mary-Alice Shemo the planning session addressed many details that had to be hammered out before publication.

Planning to cover issues not reported by other local media a group of concerned citizens met Saturday afternoon at Koffee Kat to plan the launch of an alternative newspaper, UnderCurrents. 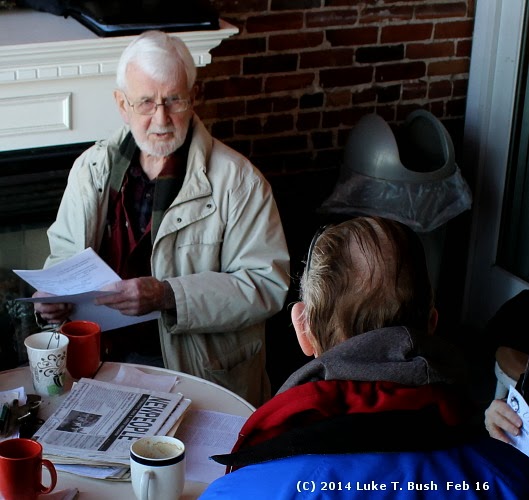 William W. Cowan (left) adds his input to the discussion.  The group made some key decisions such as the newspaper's format.  Opposing commentary would be welcome so that other viewpoints would be shared in UnderCurrents.

For more information about UnderCurrents contact Mary-Alice Shemo via email: shemogua@juno.com .
Posted by Luke T. Bush at 5:59 PM No comments: 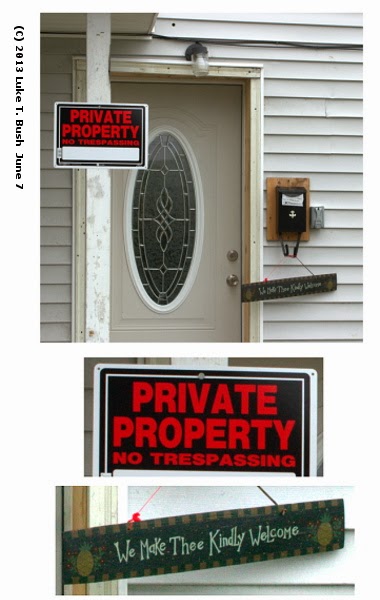 (Click on image to enlarge view.)
Posted by Luke T. Bush at 5:08 AM No comments: 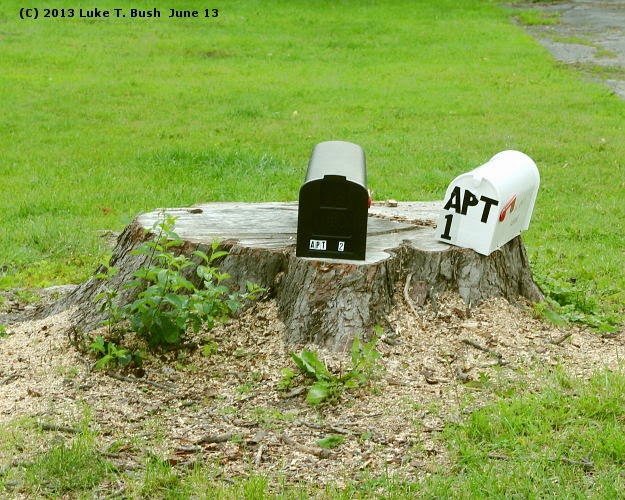 Carving and finishing an ice sculpture is like cutting a diamond: one wrong move and disaster.

I met local ice sculptor Rob Johnson outside the Saranac Lake Winter Carnival warming tent – an enclosure for people with frozen feet like me – as he was putting the last touches on two of his works, crystalline I (HEART/LOVE) NY signs. 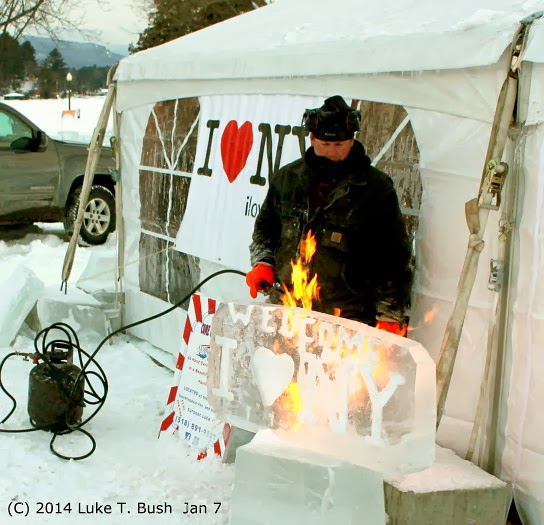 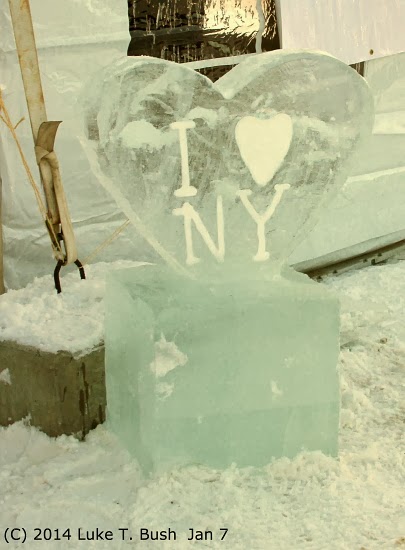 Ever wonder how those big blocks stay together with the ice palace?  Rob, who helped build the palace this year, says slush – a mixture of 50/50 water and snow – works like cement under subzero temps.

He also adds each block is really heavy, weighing in excess of fifty pounds. 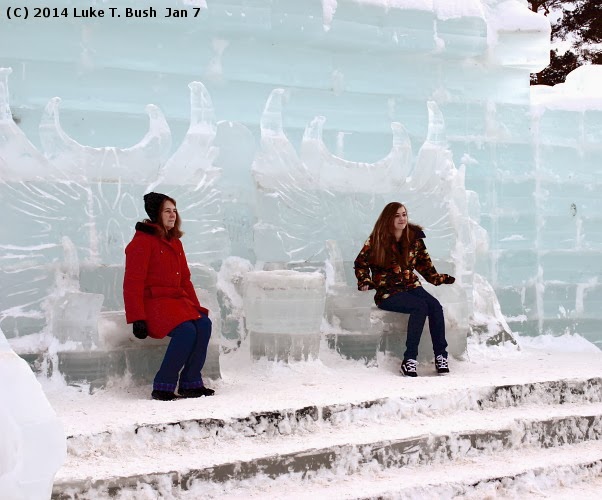 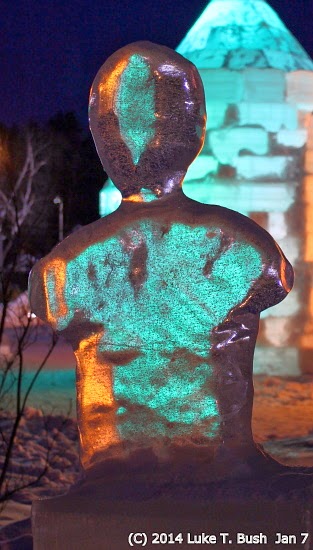 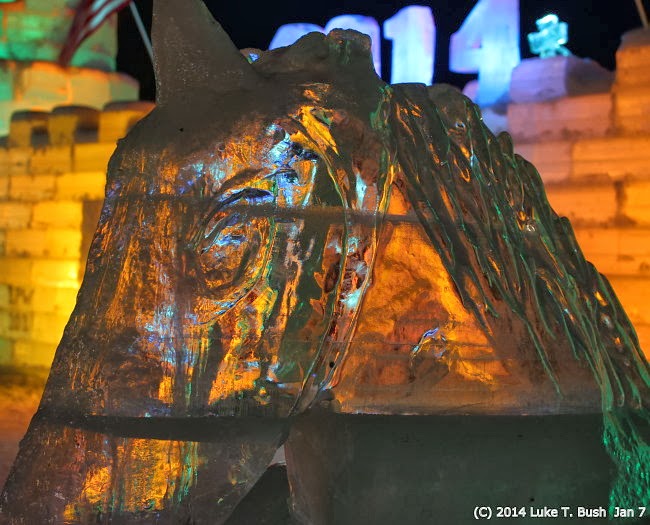 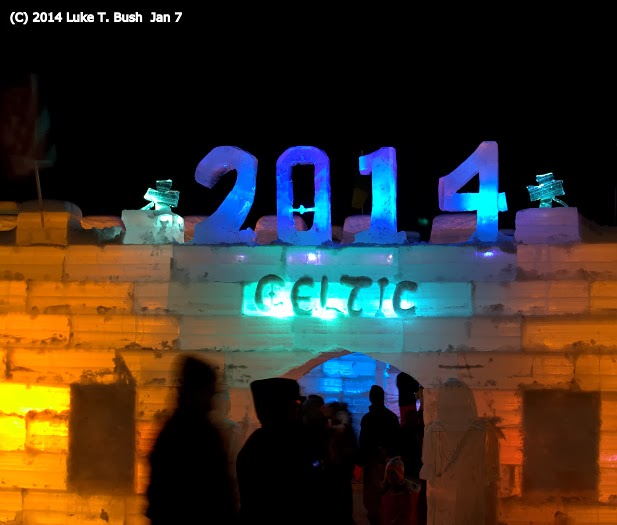 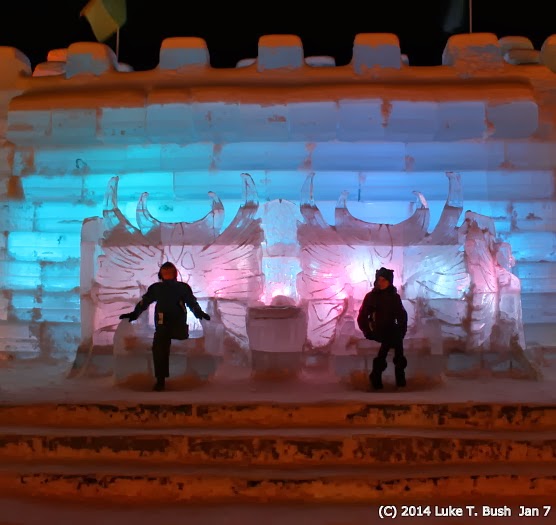 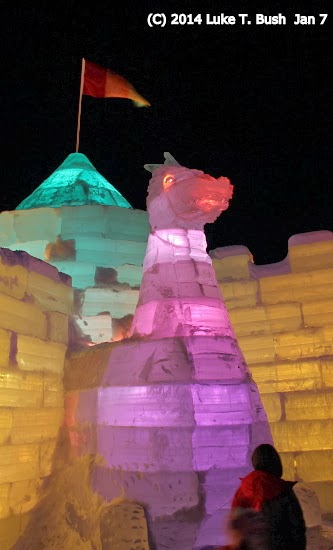 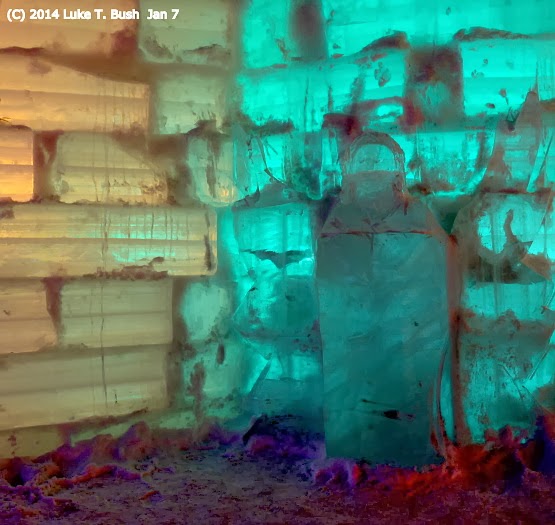 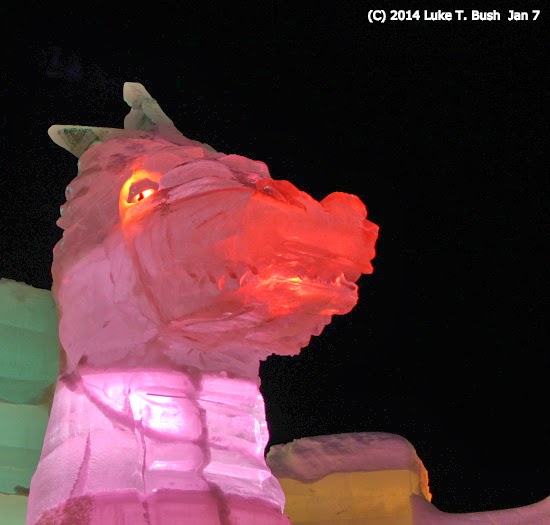 Local activists – including two who drove down from Montreal – held a vigil Monday evening at the intersection of Broad and Beekman streets to inform others about the controversial fourth phase of the Keystone oil pipeline project.

The event, "Renewables, Not KXL," was organized by Mary-Alice Shemo and the group People For Positive Action.  Mary-Alice explained other vigils were being held across the country on the same evening to get out the message that the new pipeline should not be approved by the President.

Despite the bone-chilling temperature (around 19 degrees F) activists gathered at the intersection, holding signs showing opposition to Keystone XL and also urging the President to veto it.  The group also held candles to draw attention from passing motorists and pedestrians to their cause. 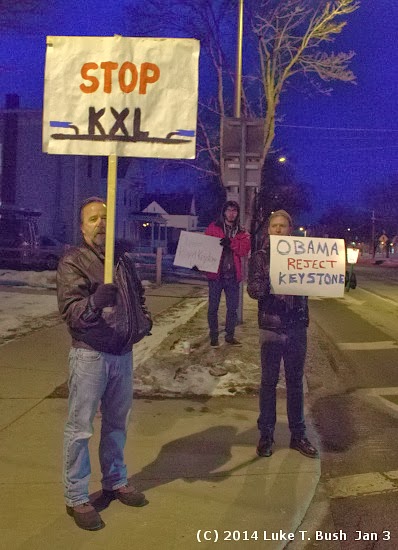 Many environmentalists are greatly concerned about the Keystone Pipeline System, especially with the latest proposed construction.  The pipeline system now runs from Alberta, Canada to various refineries in the US, including one located all the way down in Texas.

The fourth phase, Keystone XL Pipeline Project, would construct a line to travel from Alberta, Canada to Steele City, Nebraska.  One of the major reasons that environmentalists oppose this route because it would pump crude oil over the Nebraskan Ogallala Aquifer.  A major break in the pipeline could ruin the aquifer's fresh drinking water.

The vigil's purpose was to urge President Obama to veto the Keystone XL Project.  The activists said renewable energy resources should be pursued instead. 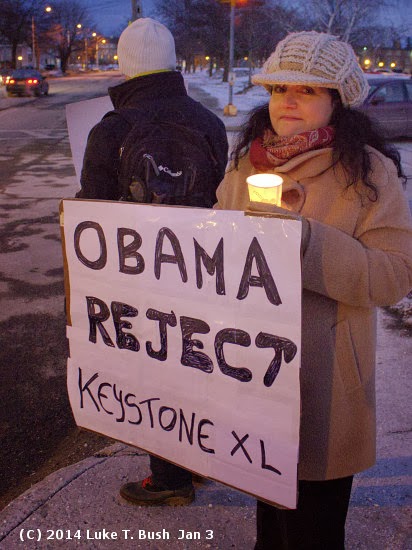