OK, I See The Monster Spider But Where's Clint? 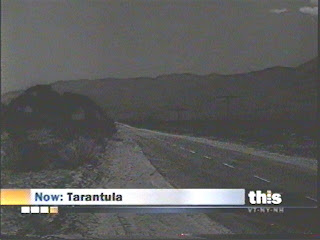 Isn't there supposed to be truth in advertising?

I caught the 1950s creature feature, Tarantula, on the boob tube the other day, courtesy of the This TV network.  It's one of the giant insect movies from that period like Them! (giant ants) and The Preying Mantis (guess giant what).

In a giant insect movie something -- usually radiation -- transforms an ordinary squishable bug into a carnivorous colossus on the loose.  Tarantula is one of the better big bug films but it does have its stupid moments.  For example, take the bedroom scene with the pulchritudinous Mara Corday who portrays a college student majoring in biology (how appropriate).   The giant arachnid is leering through her bedroom window at night, his fangs pressed against the glass.  Please note the monster's glowing eyes are about the size of Mac Truck tires.

Of course, as our heroine is retiring for the evening, she doesn't notice a 30-story Peeping Tom ten feet away emitting a weird insect sound and crunching up the ground outside.  So while genetics has blessed her with the beauty of a goddess, she ended up with the observational powers of a box of rocks.

Mara's co-star is John Agar who made a number of other sci fi/monster films.  But after the commercial breaks, what star did This TV feature when IDing the movie with banners at the bottom of the screen?  Clint Eastwood. 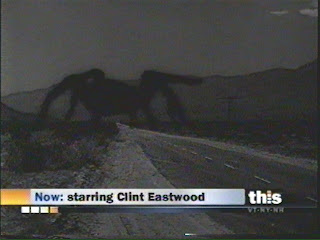 As one movie reviewer observed, don't blink or you'll miss Clint's very brief appearance at the end of the movie.  The Air Force calls out its jets to stop the mutant tarantula.  Clint portrays the squadron leader who takes out the monster with napalm.  (Maybe his character was practicing for the upcoming Vietnam War.)  With his face covered with an oxygen mask, Clint's recognizable more for his voice than his visage.  By my estimate his total screen time is 15 seconds, if that. 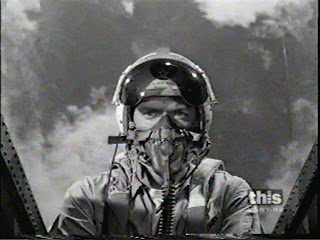 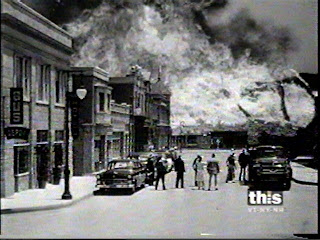 I wonder how many Eastwood fans unfamiliar with this movie got suckered into watching the whole thing and were so distracted by the strafing napalm action that they didn't notice their hero?  Clint's name doesn't even appear in the credits.  At least his bit role in this project prepared him for portraying tough characters in cop and western films that established him as a Hollywood star.

Hey, you want to really see Clint in a monster movie?  Check out Revenge of the Creature in which he has a small role as a lab technician.  Clint as a scientific brainy type?  Well, it worked for Mara Corday in Tarantula.

Jamming With The Jills 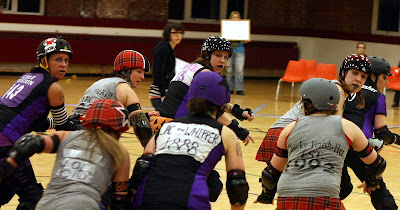 I've never been sports-minded* but I'm open to checking out something different, especially if it's an opportunity to hone my photo skills. So Saturday evening I attended my first roller derby event, a scrimmage held at the City Recreation Center (AKA the Old Base Gym).

If you're not familiar with roller derby, here's brief explanation using the black team - blue team analogy. (Considering how rough the sport can be, those are appropriate colors.) All the skaters race around an oval track. For each period of play there is a major grouping of players -- both black and blue -- forming a pack (blockers). Twenty feet behind that formidable array are two "jammers," one black, one blue.

When the whistle blows, everyone starts skating. Each jammer has to work her way through the pack, her teammates helping her along while her opponents block her from getting ahead and scoring points.

That's a very simplified explanation and this YouTube video does a better job:

The local team, the North Country Lumber Jills, started out strong, having a 30 point lead on the opposing team, the Black Ice Brawlers. The Brawlers' strategy seemed to be allowing the Jills to lead a bit, wearing themselves out. The Brawlers saved their strength for a push in the second half to win. Final score: Jills - 84, Brawlers 101.

Like I said I was interested in seeing how well I could handle imaging an indoor sporting event with dodgy lighting. Jamming through a difficult shoot. Trying different methods, using available light or filling in that light with some flash or using flash as the dominate light source.

So I was paying attention to the game but from a different perspective. Even though I'm not into sports per se, I can appreciate the skill and determination of athletic competitors. I wanted to bring out through images the effort it takes to compete in roller derby, the forward drive to score, the fight through the pack, aided by teammates while being blocked by opponents. Not an easy sport, even with the helmets and padding. Sometimes hard falls are taken. But the players get back up and keep the momentum going. Just like life.

As competitive as it was, the scrimmage never got out of hand, either the players or the audience. No one got verbally abusive or violent, unlike some Little League baseball games I've heard about.

Below are links to photos I took during the event. The Jills are attired with red plaid team colors.

This link will take you to the entire set:

And embedded below is a slideshow of the same images:


* One time an unidentified company used to run a classified newspaper ad under Employment that stated it was looking for "sports-minded" people. I never took the bait but I talked to someone who did. He told me the ad was for an insurance company.

The sports-minded angle was a way to sell insurance. An agent would meet a stranger and bring up the topic of last night's game. That was an opening to turn the stranger into a policy owner.

I'm glad I never wasted time checking out the story behind that job. I'm not insurance-minded.


The Pure Fun Tour stopped in at the Rota Gallery And Studios Sunday evening.  There was also a special appearance by local performer Adrian Aardvark.

Located at 19 Clinton Street, Rota is a drug and alcohol free establishment that sponsors all-ages events.  For more info on upcoming events:


If the embedded slideshow above doesn't work or to see larger images:

It's been a long journey for Christopher Rigsbee but he's closer to seeing a resolution to his case.

Back on November 19th, 2010, he and his girlfriend were brutally assaulted on Broad Street in Plattsburgh City by a group of men. Chris was stomped on, teeth knocked out. After an ER visit, he had to go to a dentist to have gravel removed from his gums.

City police were soon contacted after the attack and for some time the case seemed to be stalled in the system.

Jump to November 10th, 2011. As the result of grand jury proceedings one man was found mainly responsible for the assault. According to Chris in a recent interview, the others present during the attack testified against one man. That man's lawyer entered a guilty plea and all that remains is the man to be arrested and officially charged.

From what Chris has heard from a Plattsburgh Police Department detective, the man played on a local college team and is recovering from a sports-related injury in a Syracuse area hospital. According to the detective, when the man is released from the hospital, he will have to return to Plattsburgh and be formally processed. After that restitution will be paid.

Things are getting back to normal for Chris, as about normal as they can for a victim of a vicious beating. He found help through the Crime Victims Bureau at the Clinton County Probation Department which provided funds for dental work. Chris now has permanent implants to replace his missing teeth, thanks to the efforts of dentist Dr. Tom Gerner.

When Chris does receive restitution, that money will be paid into the Crime Victims Bureau fund to help other victims recover.

But for that to happen, one of the last steps has to be taken. So far Chris hasn't heard from the PPD regarding the formal charging of the one who pled guilty to the crime.