This post is for Booker because he is so easily amused.

A Snowy Day To Protest A Snow Job 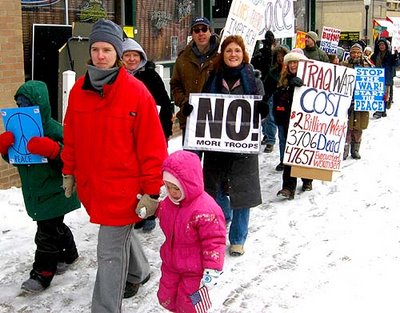 Actually the bleachers are the steps to the main entrance at city hall, the wide stone staircase leading to the second floor. Most people have a good view of each speaker on the landing below. The setting is perfect as an impromptu arena.

Random snowflakes drift down from the gray sky. Medium overcast, the sun trying to break through. The future is neither dark nor bright.

The temp hovers around zero Fahrenheit; that’s why no one is sitting. I think of a bad joke from a photo magazine. Q: What did the Eskimo get when he sat on the snow bank too long? A: Polaroids.

The last speaker asks if anyone wants to take a break at the nearby coffeehouse and come back later for his presentation. Despite the vampiric cold, the crowd tells him to press on.

And I press on, recording the event with my camera, despite my fingers growing numb. Large hands and a small camera don’t work well together when gloves, even thin ones, are added to the operation.

As the speaker makes his points, some passing drivers honk their horns when they spot the gathering. Even a tractor-trailer driver toots in support.

I think about how public opinion towards the war in Iraq has changed. Before the invasion I was one of the few who thought it was a mistake. I had to be careful when expressing such a viewpoint that was so unpopular at that time. One all-American “patriot” challenged me, asking if I supported the troops.

Over 3,000 dead troops later, the minority has become the majority. Too many empty promises, too many lies, from the president and his cronies. He wants to send in even more soldiers after “Mission Accomplished” was declared so long ago.

But jingoistic fervor has a limited life. Twisted logic is a hard sell the fourth time around. Look at most of articles datelined from Baghdad. The headlines announce more bombings and killings; the bad news accumulates into an unacceptable pile of death and destruction. The truth has dispelled the illusion that kept too many people entranced and unquestioning. 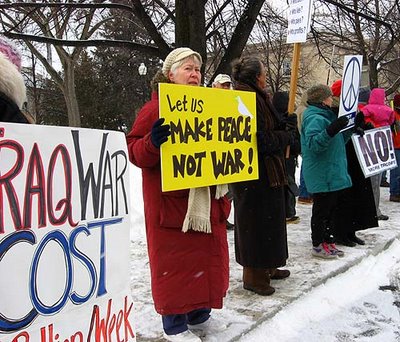 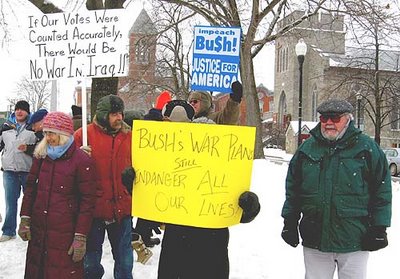 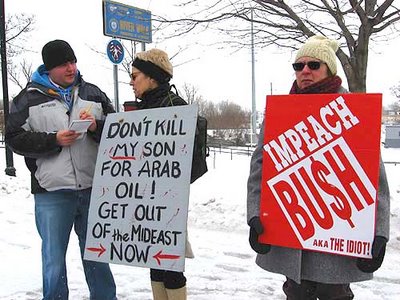 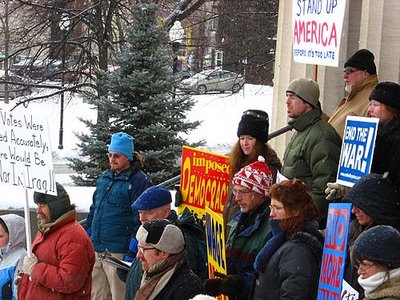 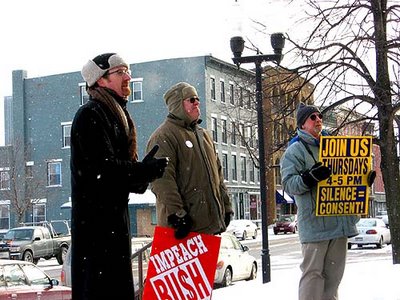 More photos and commentary can be found at my web site, writog.com.

It’s been hellishly cold lately, especially at night. And most night photography involves long exposures with a metal tripod and hands free of restrictive gloves. One recent evening I took off my gloves to take a couple of shots; the freezing air almost burned my fingers. I made sure not to touch the icy tripod with my bare hands.

And people wonder why I hate winter.

But despite the harsh weather, I still try to capture night scenes. The other evening I noticed a view in the parking lot where I live, a naked lifeless tree outlined by an eerie cloud. The shifting backdrop was formed by steam slowly rising from the paper mill down the street.

I took a number of shots, each at fifteen seconds exposure. Thanks to the wintry time dilation, fifteen seconds can pass by like fifteen minutes as you try to stay warm and concentrate on capturing the image. 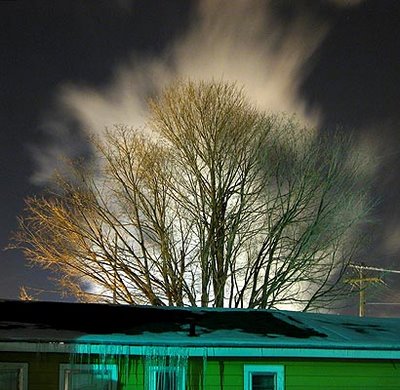 As I waited for my digital camera to record the image, I watched the steam cloud, imagining that it was about to freeze in place and crash to the ground, shattering into a million crystallized shards. 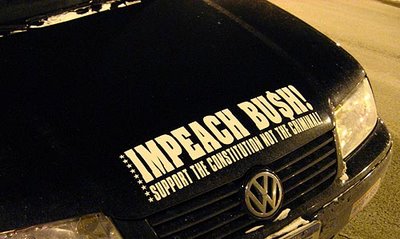 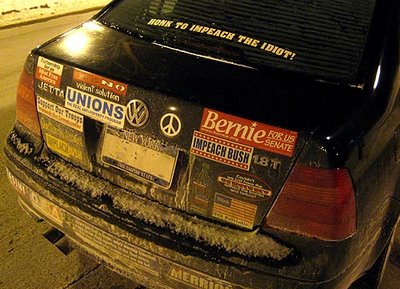 I was sitting around the coffeehouse the other night again, finding myself needing a distraction. While reflecting on my situation, I noticed that the airpots – the self-serve coffeepots – were catching my attention.

I visualized what their stainless steel surfaces could provide in the way of images with the right composition and exposure. Almost always at my side, my small digital camera and tripod were pressed into action. 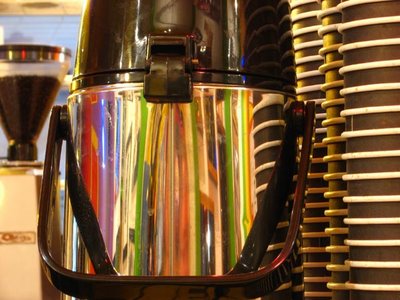 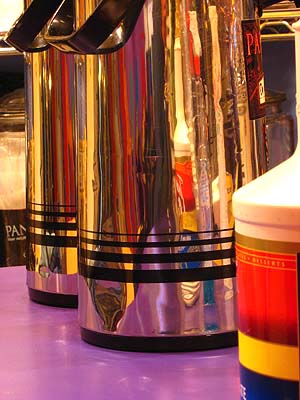 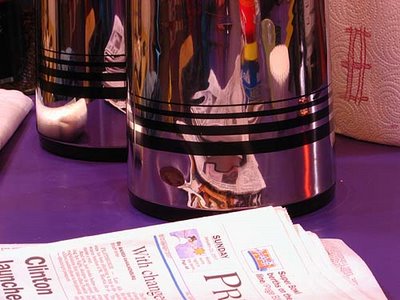 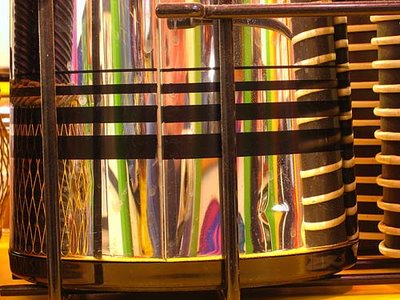 I Was Bored: Roses & Abstractions

I was sitting at the coffeehouse counter the other evening, tired of reading the newspaper. I needed something different to occupy my mind, something creative.

Roses. A vase of roses sat in front of me. I dug out my small tripod, set it up, and then attached my compact digital camera. I took a few shots. The roses, as you can tell, were a little past their full bloom: dark, decaying edges.

But I at least took one shot that despite the signs of deterioration looked OK. Of course, I can imagine that a practicing Freudian psychologist out there will have a field day with it. (Then again, the odds are probably against me. How many Freudian shrinks still in business – three?) 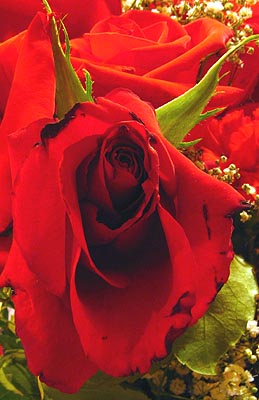 I took a few shots and got bored with trying to capture the fading bloom of the roses. I packed away my equipment. Then I wandered off, picking up a copy of Time magazine that was lying around. It was the Person Of The Year issue. Usually Time features a leading figure in the news - a president, dictator, businessman, whoever - whose actions had a notable affect on the world during the previous year.

This year Time got lazy and put a cheap mirror on the cover, saying that YOU were person of the year. How lame. 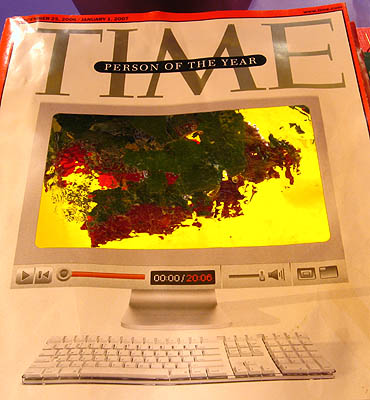 But when I laid the magazine on the counter, I noticed how the roses were reflected in the cheap cover mirror. So I played around with the mirror, seeing what kind of abstracts I could create. Once again I dragged out my small tripod and camera and took some more shots.

What I like about the coffeehouse is that all sorts of freethinkers hang there. No one bothered me while I shot away. I worked uninterrupted, a blessing. 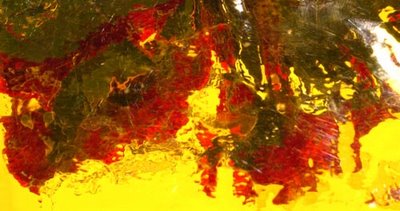 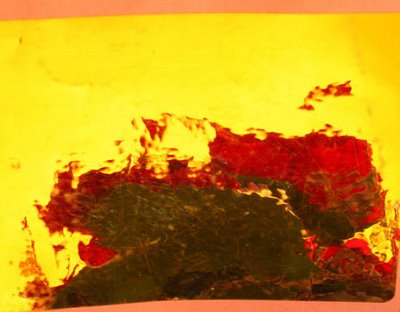 Another Winter Of Discontent

Here we go again. If you have to get around on foot in Plattsburgh, watch your step. Some of the sidewalks aren’t shoveled and you will have to walk in the street, taking chances with the traffic.

Or you could walk on those sections where everyone has trudged through, packing down the snow into an uneven surface. A packed pathway becomes treacherous after some warm weather or rain turns its top layer into an icy glaze. And the problem is compounded when another storm rolls in, piling on another showy strata.

The photos below were taken more than 24 hours later after a snowstorm. Back in 2001 the mayor at that time said that property owners had to shovel sidewalks adjacent to their properties with 24 hours or the city’s public work crews would do it. If the city had to clean up the snow, the non-shovelers would be billed for the work.

Yes, Plattsburgh is facing a budget crisis. But by billing the scofflaws who don’t act as good neighbors, more revenue can be generated.

And isn’t it cheaper to fix the problem before there’s a lawsuit? All it will take is someone being injured by slipping on the packed snow. Or maybe a car will hit him because the sidewalk was impassable and he had to walk in the street.

Today I was carefully walking on Clinton Street and someone fell behind me, hitting the sidewalk due to an uneven slippery spot. Fortunately he wasn’t hurt. But if he was injured and decided to sue, I would have been more than happy to testify at the trial. 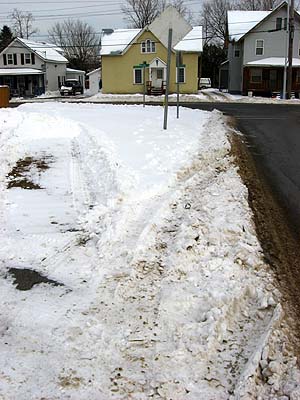 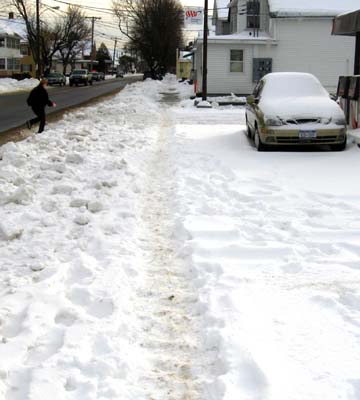 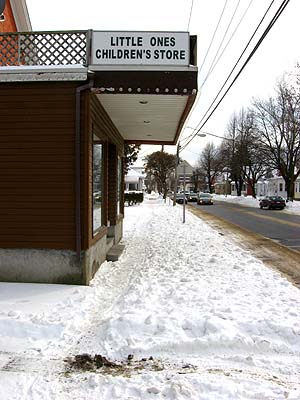 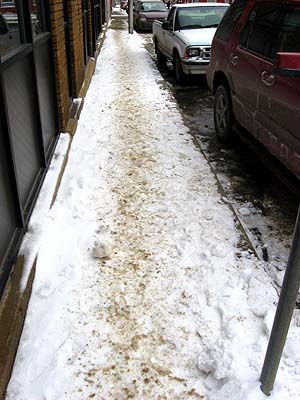 I just emailed copies of the letter below to the local newspapers. Instead of waiting for snail news, you can read it now.

Why all this fuss about the President’s call for more American troops in Iraq? Our President knows what he’s doing. After all, during the Vietnam War, he fought in the rice paddies against the Viet Cong, toe to toe with the enemy, his inspirational bravery recognized by a Purple Heart. And don’t forget Vice President Cheney who served five tours of duty in Nam, right there in the thick of battle. With their extensive military backgrounds, both men know what war is like.

It's the Oprah Mask Club! 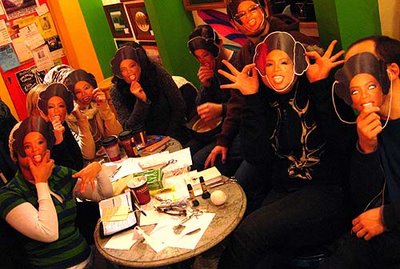 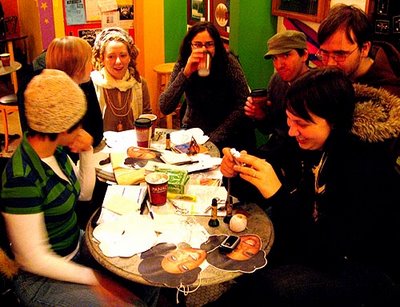 (You never know what you will encounter at the Koffee Kat Koffeehouse on some evenings.) 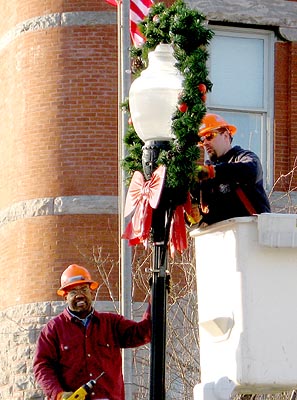 Now here's someone who's happy with his job, as you can tell from his smile.

Me, I'm happy with his job because he's helping to remove the holiday decorations from the downtown streetlights. It's a sign that summer is closer. And that long, warm sunny days are closer. 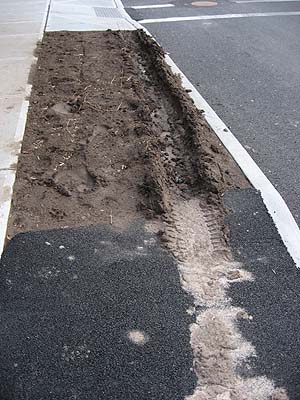 Cash-strapped Plattsburgh, NY is trying muck farming to cover a shortfall in revenue.

At certain sites in the city the median between the sidewalk and street has been replaced with a muck bed. Due to the mild winter, the first crop of compost should be ready to harvest within a couple of months, weather permitting.

In the meantime pedestrians, dog-owners, and drivers are asked to avoid any contact with the nutrient rich but manure-laced muck beds. No one or his pet should step into the squishy compost.

And while it is difficult for local drivers to stay on the road due to lack of proper motor skills caused by genetics, alcohol, drugs, or a combination thereof, extra caution must be maintained to avoid disturbing the muck’s growth cycle, i.e., don’t drive your vehicle through the beds.

Severe penalties will be imposed on those who trespass on the muck strips. Of course, such fines will generate even more revenue for the city.

The city of Plattsburgh has announced a new awareness campaign centered on the slogan: