One week since the sudden attack. Excruciating pain in lower back and left leg. Take Ibuprofen but intense pain burns off relief. Leg feels like it’s going to explode. Go to ER early Saturday AM (around 2). Wait and suffer. Blood pressure has shot up, indicator of the agony. Finally get CAT scan and painkillers via IV.

Went to see my doctor (general practitioner) Tuesday, Jan 27. Quick examination of left leg: no swelling, warm, but better see specialist. Wait for call back or note from doctor. No response.

Most of the pain is under control but left leg remains numb, 24/7, right down into my toes. I cut back on frequency of pills (Percocet and Flexeril), take every 12 hours or more instead of 6-8. Painkillers cause prolonged sleep, less awake time being mobile.

Now I just wait to see what happens next.

Decided this morning to start tracking my progress – or the lack of it. 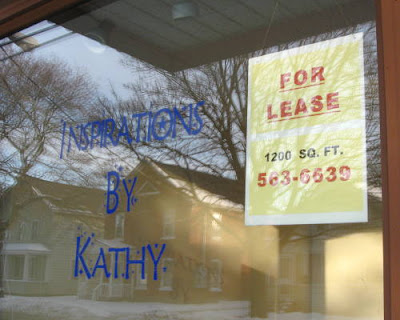 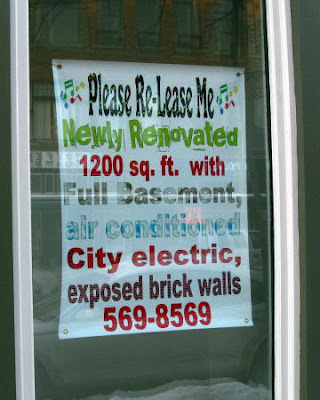 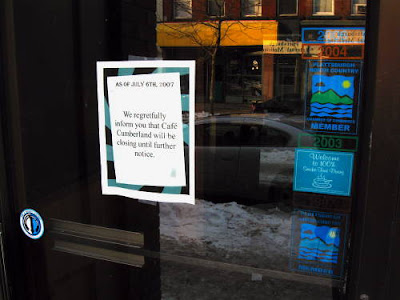 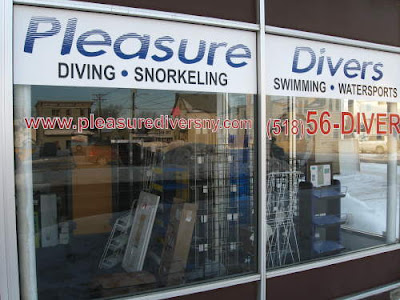 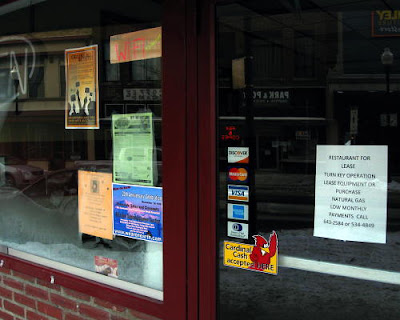 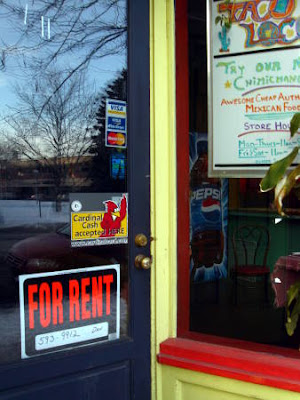 Tonight I was walking along, briskly, headed for my warm apartment. Lately most of the sidewalks have been shoveled so that I don’t have to trudge through deep snow or be forced to walk in the street. I was grateful for that.

But another problem doesn’t go away, even with winter. I almost stepped in a pile of fresh trouble of canine origin. Fortunately I’m trained myself to keep scanning the ground ahead of me for such booby traps, especially any lurking in or near the shadows. 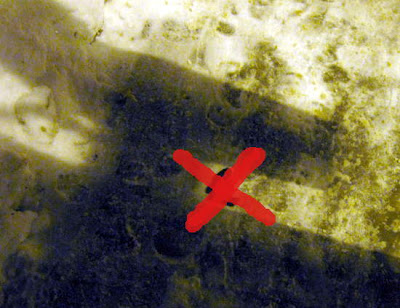 Many thanks to the dog-owner too lazy to pick up after his four-legged fecal factory.

One way to housebreak a puppy is to rub its nose in its mess. Maybe self-centered dog-owners should be trained the same way when it comes to curbing their pets.

Tired of looking at vast expanses of barren white snow? The Plattsburgh Public Library has a couple of colorful displays providing relief to your mind’s-eye.

Upstairs on the second floor is a display of quilts for those into artistic fabrics. Spanning the first and basement floors is an exhibit of diverse images by members of the Friends of the Library. 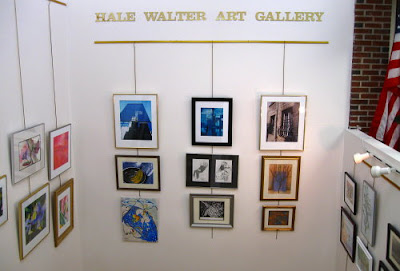 With the downstairs exhibit you can stare at this work by yours truly and figure out what it is. 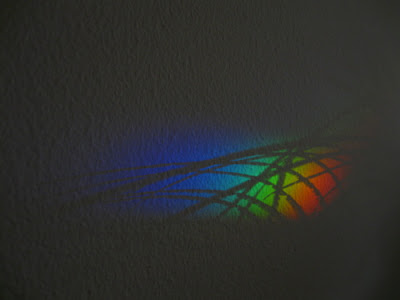 Plattsburgh – like many communities across the country – had the life sucked out of its downtown when a mall opened up outside the city limits. One way a downtown can compete with a mall and its broad, mainstream offerings is by promoting specialty shops, niche stores.

Located on Miller Street, Restless Roots isn’t located right in downtown Plattsburgh, but it still serves an example of the type of store that can attract shoppers looking for something besides the usual mass-produced corporate crap at the mall.

Overseen by Jessica Van Splinter, Restless Roots rents space to local artists. The gallery is small but its diverse offerings – drawn, painted, sculpted, printed, knitted, carved, stuffed – are neatly displayed, making the best use of its space. All media are represented from photography to fabric creations.

I’ve walked by the shop many times on the way to the post office but never took the time to check it out. Friday evening there was an exhibit opening for a student artist from Plattsburgh State, Tavish Costello, so I decided to check it out.

Some of Tavish’s drawings feature human figures entangled by colorful scrawls. I had assumed that he started with the figure, but Tavish explained that the scrawls came first, just letting his mind go free, and then the figure is drawn to fit the wild pattern.

Stuff you won’t find at the mall. 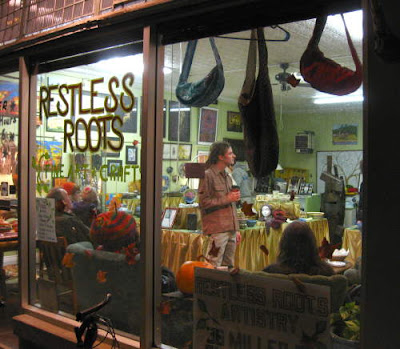 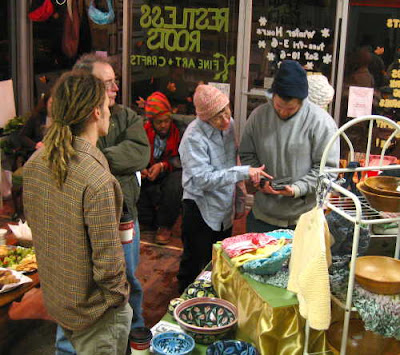 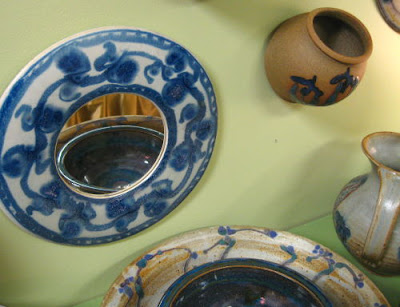 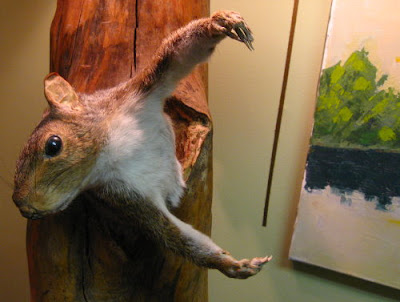 A Kick In The Fanny

Sameer Reddy doesn’t want to me wear a fanny pack.

Who is Sameer Reddy? Got me. From what I gathered from some quick Googling, he is some short of fashion expert for Newsweek. I don’t know if he’s related in any way to an Indian cinematographer with the same name or an Indian actress named Sameera Reddy.

Anyway, I don’t have the time to research a bio for Sameer Reddy. I’m assuming that he isn’t a put on, even though his stuff reads like it should be published with the other satirical articles in The Onion.

Recently Reddy wrote an elitist – and essentially useless - column for newsweek.com, Putting the Chic Back in Dressing. Reddy wants Americans to dress better. He points to the stereotype of the American tourist: “a loud, chubby sight-seer wearing a fanny pack, baseball cap, printed T shirt, jean shorts and sneakers.”

I don’t tell other people what to wear. That doesn’t stop me on commenting on how stupid some people look. I think ties are stupid. So-called well-dressed people with a non-fuctional cloth cord wrapped around their necks. For what? A least a hat keeps you protected from the sun, cold, and rain. But if you’re comfortable with a tie constricting your collar, fine by me. Don’t expect me to wear one of those damn things.

I believe in comfort and practicality. I wear a fanny pack because I have back trouble. One trick I learned was not wearing my wallet in my back pocket. Sitting down with a thick wallet in the back pocket shifts weight to one side, causing stress, aggravating back pain.

So what reason does Reddy offer for Americans to dress better, at least better in his eyes? Barack Obama – known for “his elegantly simple and straightforward wardrobe and manner” - becomes president on January 20th. Therefore, we all should imitate his style.

Reddy observes: “Comfort has its place, of course, but if that becomes the guiding value in getting dressed—or anything else—then we've got a problem. This misplaced priority has arguably contributed to our current troubles with credit, education and productivity.”

I see. Individualism = the collapse of civilization.

Follow the chic leader. Dress proper. Use strict discipline when clothing yourself. After all, schools that make all their students wear uniforms are better – it’s a scientific fact. So follow the leader, surrender to gray uniformity, and improve your inner being. It worked for the Hitler Youth.

It’s too bad that Sameer Reddy wasn’t around in the 1930s to dictate what Americans should wear. His advice to President Franklin D. Roosevelt: ditch the wheelchair. An ungainly accessory, Reddy would’ve sniffed.