One of my friends said he didn't like either of my previous posts of close-up insect photos, the preying mantis or the Japanese beetles. But he did say he liked the ladybug images at my blog. The only thing is I haven't posted any ladybugs until now. 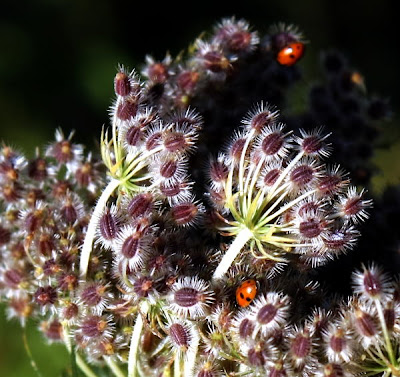 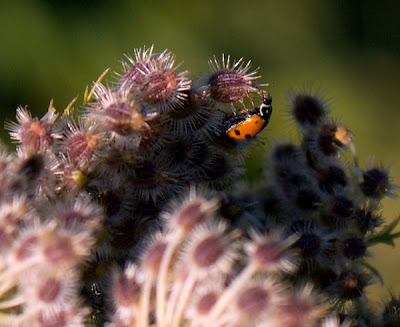 I realize that Plattsburgh City has more important problems on its mind after Tropical Storm Irene hit on Sunday than leaks at the public library. But the point that I've been trying to get across for years is that if you fix it right the first time, you won't have to worry about it again.

As you can see from the accompanying images, leaks have once again wrecked ceiling tiles near the main entrance. How much do those tiles cost? What about the problem with mold growing within the building? What will it cost to remedy that? And how much more will the carpeting take before it has to be replaced? 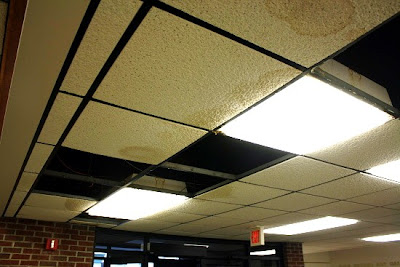 Apparently the leaks have been traced to outside walls that need repointing. When the wind drives the rain in a certain direction the water seeps through the damaged mortar between the bricks.

Is the city saving money by constantly ignoring the problem? Add up the replacement costs for ruined materials plus the expense of mold removal and it probably adds up over the years to more than finally fixing the leak.

Your tax dollars at waste.


So called because Kevin found him in the Koffee Kat basement last night. Apparently it was seeking shelter from all of the wind and rain from Hurricane Irene.

(Click on the image for a larger and creepier view.) 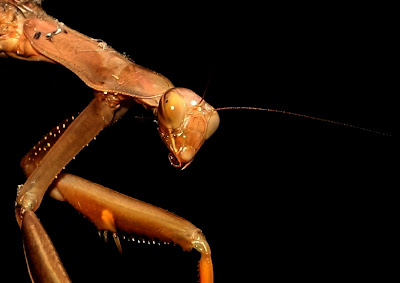 
Learn how the quote ends and see the nauseating details over at my bad blog, Dogtown 12901.


"Anytime a crime is committed or someone is assaulted I absolutely am not pleased ... and always look for answers as to why it happened and aggressively pursue prosecution to the fullest." -- Plattsburgh City Mayor Donald Kasprzak, Press-Republican, December 27, 2010. Article: "Student speaks out after reported gang assault"


August 19th marks nine months since Christopher Rigsbee and his girlfriend were brutally beaten on Broad Street during the early morning hours by a group of cowardly thugs.

As detailed previously in other posts at this blog, the police were called soon after the incident and it wasn't long before "persons of interest" were on the cop's radar. It should have been an open or shut case.

Local newspapers carried the story and how Chris was raising awareness of the problem with violence in the community through a public demonstration. He had planned a second rally but was asked by the Plattsburgh PD to hold off because they were proceeding with their investigation and another demonstration might affect that probe.

So Chris decided to go along with the PPD and canceled the demonstration. His beating quickly dropped from the public's radar.

Time passed. Nothing happened. Repeated phone calls to the PPD by Chris and his mother, Samantha Rigsbee, resulted in no movement with the case.

Dr. David Keys, former professor at PSUC, heard about the situation and had his Criminal Justice students at New Mexico State University, Las Cruces, write letters expressing their concern about the apparent indifference to resolving the case. He sent copies of the letters to the New York State Attorney General's Office which passed the matter on the Public Integrity Bureau which in turn passed it out to Clinton County DA Andrew Wiley.

At this point Chris and his girlfriend were contacted by the PPD; they were told the case was still active and that follow-up interviews would be conducted.

Then nothing. No follow-up interviews.

Pressing on David Keys contacted three Plattsburgh newspapers -- the same ones so quick to cover the story months ago -- making them aware of the his students' letter writing campaign and the lack of apparent action by the PPD.

Response from the newspapers? Silence.

Unless there's recent official activity that I haven't heard about, the case grows cold.

And so months go by and for some reason the big story is nothing, despite the savage beating that Chris and his girlfriend suffered. Regarding the statute of limitations, time is running out.

Maybe someone wants it that way. Why? One of the attackers has connections? The college doesn't want the bad publicity? The PPD screwed up the case? Who knows?

Ask those questions and you will probably get only one thing for a response. Where else but Supernal Downtown Plattsburgh?


It really gets cold in Lake Champlain during the winter. Why not head south?

Note: The movie source I used to create this video is much more rubber than blubber. 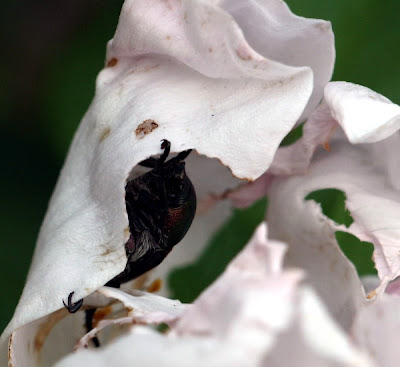 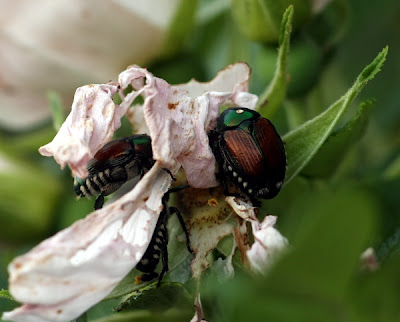 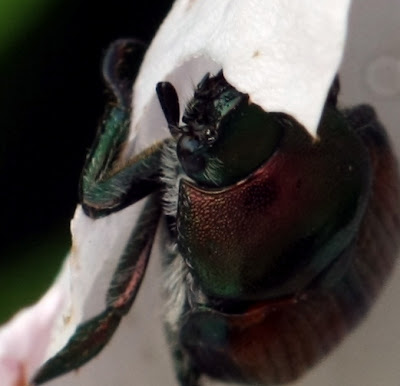 In a previous post, Facebooker Fingers Heckler, I documented how a musician/open mike host used Facebook to tell his story about being heckled by an off-duty Plattsburgh City Police officer at a downtown bar.

I gathered the information he posted before friending him. His posts about the incident were there for anyone to find through signing in to FB and doing a quick search. Anyone with a Facebook account -- including the police officer he says heckled him and then was escorted out by bouncers -- could find the same info without being his friend. It was public info.

The Facebooker, Mike Pedersen, has messaged me on Facebook to take down my previous post. I messaged him back and told him why I was in the right to keep it up. Also, I heard the story first offline; it's circulating among the meatspace public so it's not as if only a select few are aware of the matter.

While I consider Facebook messages more or less akin to email -- they should be regarded with some privacy -- I don't regard a post on my wall the same way when anyone can read it. Once again, it's public and I can republish it. Here's what Mike Pedersen wrote on my wall:

"Luke, I'm going to ask you one last time to take this down. Perhaps you like to read the first line of your own blog, of you have no idea what the hell your talking about, again. You add me as a "friend" and the next day you pull this shit with no consent from me. YOU ARE BEING A MORON. Why don't you post a picture of yourself and stop hiding behind your camera. Next time I see you in public I'll be sure to take your picture and post it in a blog for everyone to see. This whole issue is none of your god damn business"

I don't know why a photo of myself is germane to the issue. If Pedersen didn't want anyone to know what he looks like, he shouldn't have posted his visage on Facebook. Just because an image is on Facebook doesn't mean only a select few can view it, unless you have the proper privacy settings.

As for the issue being none of my business, it is. In the past on this blog I have mentioned some problems with the Plattsburgh City PD and also discussed how that department is perceived by the public. The intent of my post was to show how someone can use Facebook to address issues that the mainstream media sometimes won't cover. I also noted that while he wanted my post deleted his were still up at his Facebook page.

I friended Mike Pedersen because I couldn't find an email address for him. Facebook was the only way I could inform him that I had put up the post. I gave him the opportunity to add or comment to what I wrote as I did with the police officer. So far his only comment is to delete the post as if the whole thing will fade away from reality. Instead of venting at me, maybe he should be spending energy addressing the issue he says he has with the police officer, i.e., filing a formal complaint.

I stand by my words. Do you, Mr. Pedersen?

That's the impression created after reading a couple of his recent posts on his Facebook page. Mike is a local musician who hosts an open mike night at the Monopole bar in downtown Plattsburgh. In a post dated July 28, 2011 he mentions a problem he says he had that night:

"Tonight I flashed my metaphorical badge and had the current and very bitter boyfriend of a recent ex kicked out of the Monopole for heckling me. Oh, did I mention that he's a police officer. He may have a badge and a gun, but I have a microphone and I know how to use it! Big thanks to the Monopole staff for looking out for me and standing up for what is right....you know who you are."

Then he added to his post in the comments section:

The link takes the reader to an article dated November 19, 2010 that says Officer Robert Annis of the Plattsburgh City Police Department "was arrested by his comrades about two weeks ago" regarding an alleged domestic dispute with his girlfriend." Mike also posted the link in a second post on August 1 that generated some sharp comments from his friends.

As far as I know there was no follow-up by the Press-Republican about the outcome of this alleged domestic incident. I would like to hear Robert Annis's side of the story regarding this incident and the one at the Monopole.

(Note that the PR article says the alleged domestic incident occurred about two weeks previously to its story being filed. Once again timely reporting by the PR.)

Whatever the actual stories are regarding both incidents, Mike Pedersen has shown the power of Facebook as a communications medium. His posts about the alleged Monopole heckler have produced comments like these on his Facebook page:

--Nice to see that the blue code of silence didn't save this dipshit.

--he [Annis] breaks stuff, kicks his girlfriend, and gets a paid vacation ( while they figure out how to cover this up)?

--"suspension with pay" is only punitive for those with... personal pride I guess? something tells me we are lacking in that department.

--I love that you had him thrown out of the Monopole! I only wish I was there to witness it...and help kick him to curb.

Obviously the Plattsburgh City PD has another public relations problem due to this.

Of course, the Web cuts both ways, producing both information and misinformation. But on the side of information it shows that one person has an avenue to tell a story that the local mainstream media won't bother to look into. Or if the news media does look into it, it only happens weeks after the incident.


I have just posted a real disgusting image at my bad blog, http://dogtown12901.blogspot.com . I can no longer ignore the constant problem with dog waste in Plattsburgh City. If you have a sensitive stomach, DO NOT look at the post entitled "Great Alfresco Dining," dated August 2, 2011.