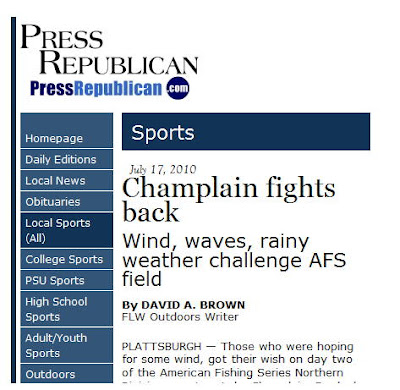 I ask because recently the Press-Republican has been running articles by David A. Brown, FLW Outdoors Writer, about a Lake Champlain fishing contest.

Time to Google because the PR ain't gonna provide any details.

Here's an explanation I found at the FLW website:

"FLW Outdoors, named after Forrest L. Wood, the legendary founder of Ranger Boats, is the largest fishing tournament organization in the world offering anglers worldwide the opportunity to compete for millions over the course of 189 tournaments in 2010. FLW Outdoors has also taken fishing mainstream with FLW Fantasy Fishing awarding the largest prizes in the history of fantasy sports. FLW Outdoors memberships are available featuring numerous benefits including Player's Advantage."

I doubt you'll see any discussions in any FLW Outdoors article about the impact of fishing derbies on the lake, whether or not there are problems. That would be journalism.

This is no different than a "Staff Writer" for Treasure Hunters Roadshow writing a full-page advertorial that appears at first glance to be a news article. Maybe the Press-Republican should officially abbreviated its name to just the initials PR so that knowledgeable readers will be tipped off that it's become a public relations organ.

This FLW business is just another example of the declining standards of the Press-Republican, a newspaper that one day won't even be worthy of being recycled as fishwrap.