Start at the barbershop on the corner of Clinton and Marion. Head east on Clinton Street, walking towards Margaret Street. A few steps down the sidewalk stop and look up. See it? That sagging white bulge against the red brick? 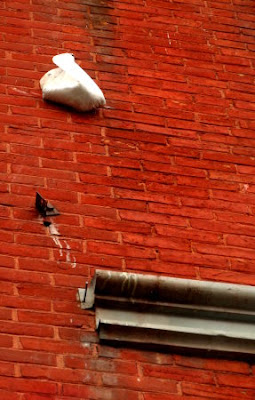 It's still there. The mystery plastic bag. The object that I posted about back in October.

I don't know how it keeps hanging there or how long it will stay up. I don't know what's in the bag. But someone might find out if it suddenly drops and hits them.

Especially someone who follows the directions I gave in the first paragraph. So if you try to figure out the contents in person, be prepared to take a quick sidestep.

On Monday, January 18th in its Cheers & Jeers editorial the Press-Republican had the gall to print this:

"JEERS to property owners — particularly business property — who are non-shovelers, in the city and elsewhere. We receive Speakouts with disturbing frequency naming business owners who are derelict in this important responsibility." 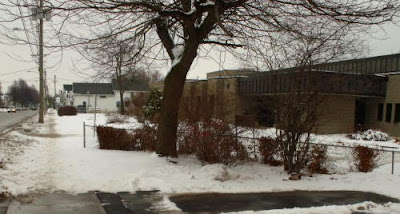 Notice where the bare sidewalk ends? Someone shoveled up to the point where another property owner was supposed to do his part.

Sidewalks adjacent to someone's property are supposed to be cleared of snow 24 hours after a storm. The stretch in front of that gray stone edifice remained unshoveled a lot longer than 24 hours. The business owner did use a snowblower later on but that only removed the surface, leaving a couple of inches of tracked down snow, turning it into a bumpy and slippery pathway.

Keep in mind that the driveways and sidewalks on the property were shoveled bare for the convenience of employees while the public sidewalk out front was ignored.

The PR wrapped up its "Jeer" with this statement:

"If the trend seems to warrant it, though, we'll assign someone to drive around and check. Let's hope this serves as an adequate reminder that clearing sidewalks is important to the entire community."

Drive around and check for unshoveled sidewalks? How about walking out your front door and taking a look?

I've learned to pay attention when walking around the nighttime streets of downtown Plattsburgh. You have to be wary of what is lurking in the shadows. Muggers? No. Just this stuff: 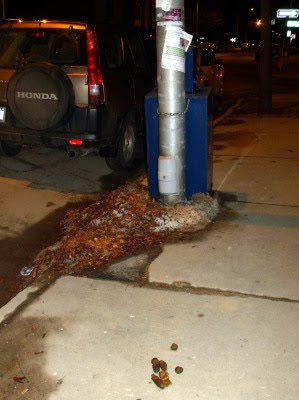 A delightful decoration on Brinkerhoff Street. Maybe this is why that restaurant near this spot closed. Doesn't stimulate the appetite.

Notice that blue Press-Republican newspaper box in the background? Just two quarters would have provided a proper background to lay the decoration.

I wonder why the Chammer of Commerce doesn't include images like this on its website to promote Dogtown -- I mean Plattsburgh.

tough shit, try owning a dog in the city of plattsburgh and finding a nice place to have it squat... birds shit everywhere, stray cats shit everywhere... everytime it rains in the summer the sewers (which take both rainwater and sewage together to the plant) overflow, onto the hills of the monument... my only problem w/ dog poop is when its left in the sidewalk or in the path of where people normally walk... otherwise, it's biodegradable and helps fertilize stuff... obviously you don't own a dog, and if you do and you clean up after it then bra-vo... either way get off your fucking high horse

Your dog. Your responsibility. Not mine.

Your dog's shit. Your responsibility. Not mine.

You try to rationalize your actions by saying its OK to leave dogshit behind if it isn't at a spot where people normally walk. People do walk across lawns, whether it be at City Hall or one of the parks.

You say dogshit is biodegradeble and fertilizes "stuff." Dogshit can also carry nasty "stuff" like pinworms.

I don't see that much birdshit around as I do dogshit and cats usually bury their wastes. Because other animals defecate doesn't give you the right to leave behind your dog's waste.

Also, the city isn't responsible for providing a "nice place" for your dog to squat.

You have two choices:

Pick up after your dog

Move out of the city to a community where your dog can run free, where people don't mind if your dog leaves shit on their lawns. I don't know of such a place so good luck.

And as for me being on my "high horse" -- hey, at least you don't have to pick up after it. How's those road apples, pal?

Thanks for your illogical puerile rant. It made me laugh.

Email ThisBlogThis!Share to TwitterShare to FacebookShare to Pinterest
Labels: dogshit

Empties: Signs Of The Times 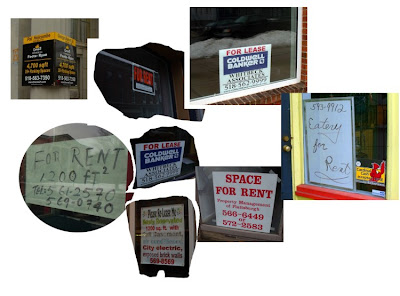 Is the Great Recession over? Walk around downtown Plattsburgh -- streets like Bridge, Brinkerhoff, Margaret and Clinton -- and you tell me.

All these images were taken Monday afternoon, 1/18/10. 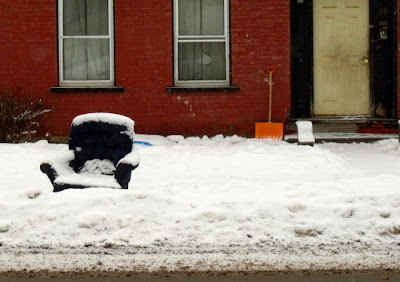 For weeks this abandoned easy chair sat out by the curb at this Miller Street location. 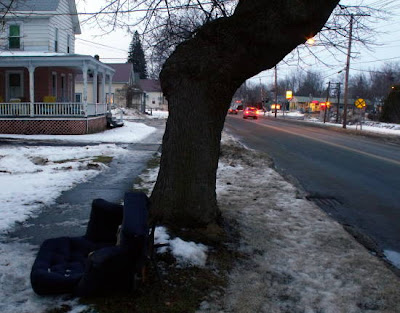 Now it has moved down the street to become someone else's problem. It's blocking part of the sidewalk.


UPDATE 1/20/10: I noticed yesterday the chair is gone. Someone told me that DPW picked it up. Kudos to the DPW. 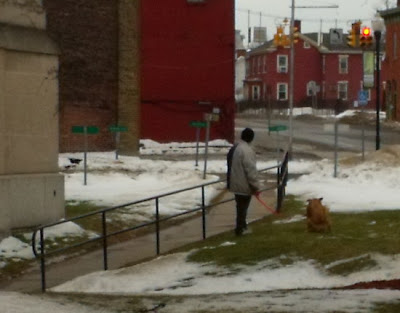 I don't know if that squatting dog in the image above left anything behind on the City Hall lawn. I wasn't that close (I see enough disgusting dogshit as it is, thank you). Maybe the man on the other end of the leash was carrying a plastic bag to pick up after it. 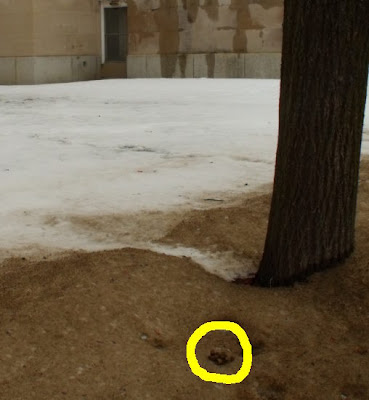 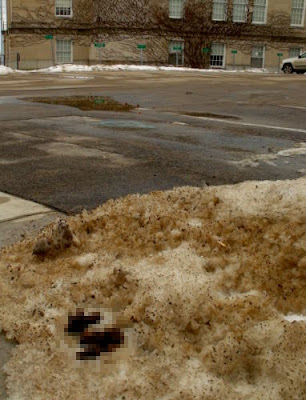 But someone has been leaving unpleasant decorations around City Hall. I wonder how bad municipal lawns are going to look when the snow melts and sins of omission -- or should I say emission -- are no longer concealed.

Wage Peace For A Change

After George W. Boob and his neo-con Republican pals got our country mired in a dead end war in that country, I thought Afghanistan would also be known as the Elephant's Graveyard. But thanks to the centrist (i.e. half-ass) policies of President Obama, the Democrats will be sharing just as much blame. 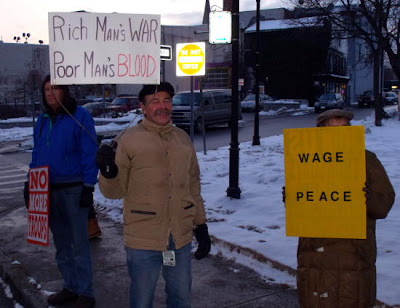 When G.W. Boob was president, local peace activists would show up almost every Thursday afternoon at Trinity Park in downtown Plattsburgh. They would line up on the City Hall Place sidewalk, signs in hand, reminding people that two dead end wars (Iraq being the other one) were being waged. Today some of those activists returned, also upset with Obama's decision to continue waging the Afghani-nam War. 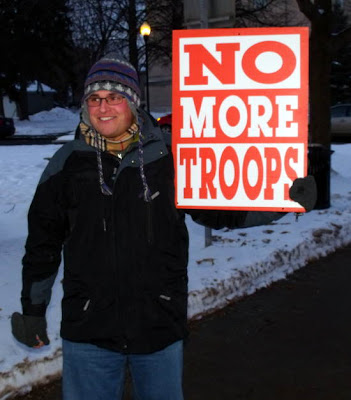 The gathering today might be a one time event. It was held to see how many activists wanted to expression their displeasure with the government continuing its march of folly. Other demonstrations might be held, once again on a weekly basis. For more info, email Jim King: jking8213@charter.net.

Back during the warm and sunny days Google came to Plattsburgh and imaged some areas with its Street View cameras. For example: 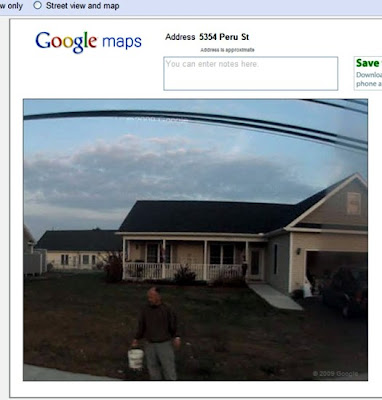 Over the years, as I've mentioned many times on this blog and my old website, I've been hassled about taking photographs. But a corporation like Google can drive through and shoot up the place -- in a photographic sense, of course -- no problems for them.

And if someone still bothers me, I'll tell him to mind his own business and if he doesn't like that, "Bucket!"

(I know -- such language is beyond the pail.)

Every winter in the North Country people are seriously injured, even die, from the improper operation of snowmobiles. Local media issue warnings about snowmobile safety after tragedy strikes.

When I picked up a weekly newspaper the other day a glossy insert fell out. It was a flyer promoting snowmobiling in Clinton County. After hearing in the news about recent injuries and deaths caused by irresponsible snowmobiling, excessive speed in particular, I noted this image on the flyer's cover: 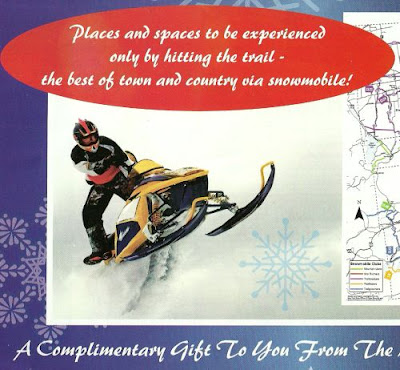 Gunning it, flying through the air -- that promotes safety, eh? 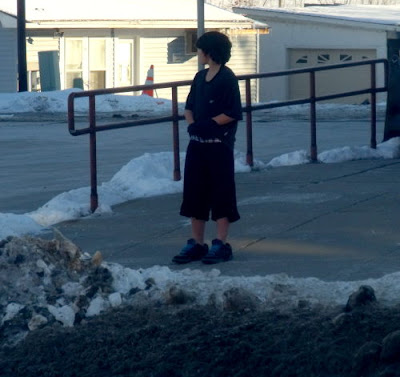 If Not Me, Then Google

As I mentioned in a previous post way back in 2007, one afternoon I
noticed a gnarled leafless tree across the street and took a few shots. I continued to walk downtown and about two blocks away a pickup truck pulled over, the driver got out and asked me why I was photographing his house. I told him I was only shooting the tree out front, showing him the image on my camera's screen.

After that incident, I noticed that the man's house was on Google Earth, an overhead shot of the building and so I pointed that out in a post.

Well, I wonder what that home owner thinks about this image: 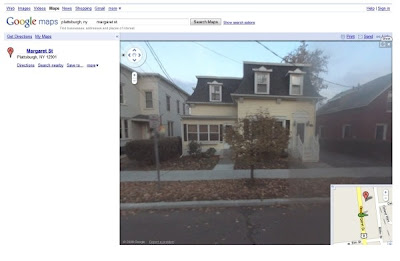 It's a screencap of his home as recorded on Google Street View. Maybe he should get upset, jump in his pickup truck, and drive out to Google's corporate HQ, the Googleplex in Mountain View, California, and ask them why they photographed his house. 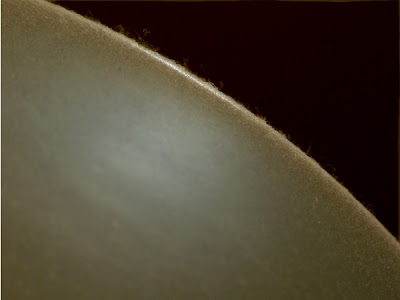 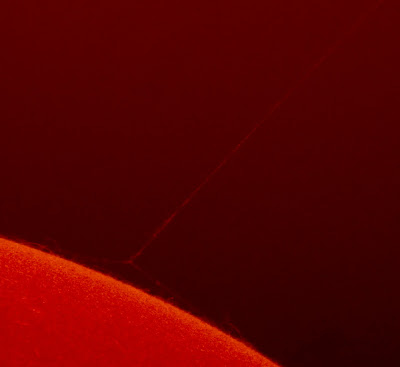 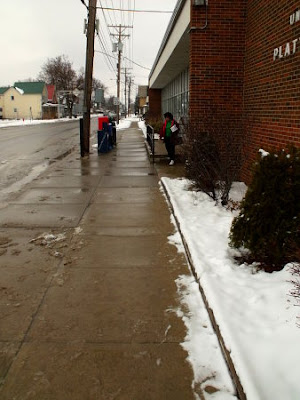 January 1st is a holiday; most people have the day off from work. But that didn't keep the sidewalk at the Miller Street post office from being shoveled. 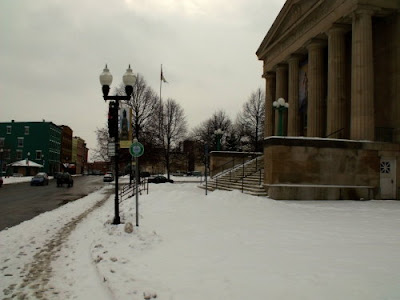 But a short walk away from the post office was this rough stretch of sidewalk. Apparently the property owner adjacent to it was too hung over from New Year's Eve celebrations to clean it up. It's important to pitch in with your neighbors and do your duty. And also to set a good example.

Property owners in Plattsburgh are supposed to shovel snow from sidewalks adjacent to their properties. 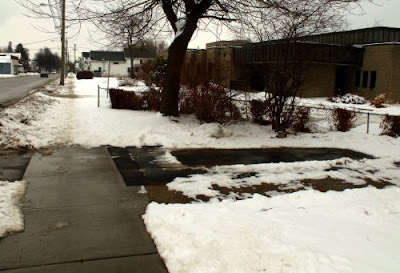 This property owner has been doing his duty, keeping the sidewalk bare in front of his building that sits next door to the Press-Republican offices. 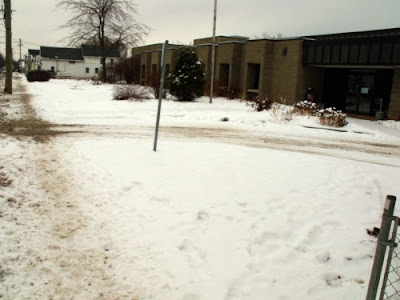 But the stretch of sidewalk in front of the Press-Republican has been rough traveling for pedestrians the last few days. The trampled down snow is uneven and can be slippery. While sidewalks on the PR lot have been shoveled for the benefit of its employees, the public sidewalk has received minimal (if any) attention.

Bear in mind that the PR has published editorials scolding people for not shoveling public sidewalks.