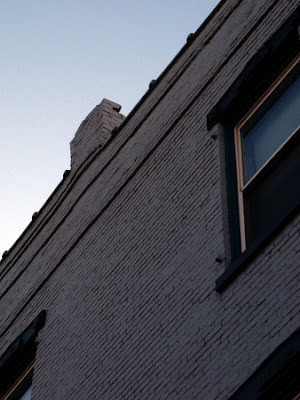 I spotted this chimney -- or at least what appears to be the broken remains of one -- on a building at the south end of City Hall Place. Maybe it's a matter of perspective but it seems to be leaning a bit towards the sidewalk. 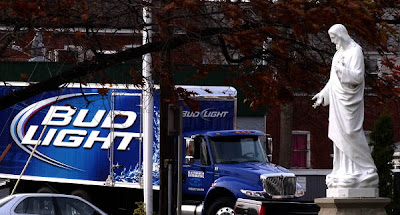 What's In Your Pouch, Santa? 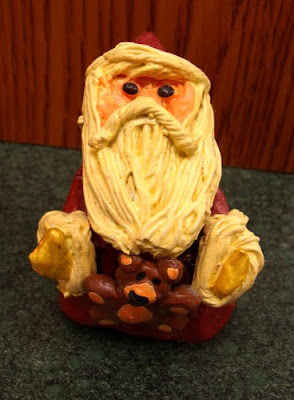 Looks like Santa gave birth to a teddy, not a joey. 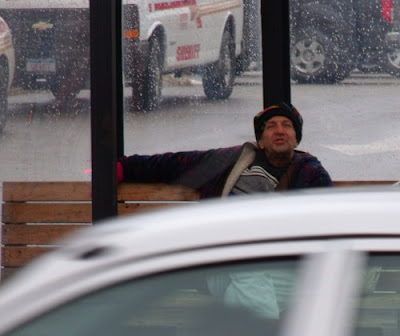 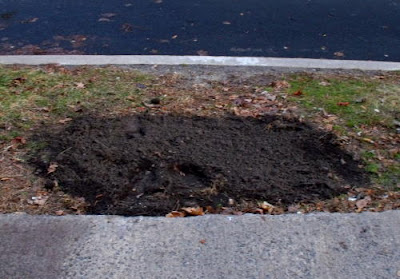 The concrete scab outside the Plattsburgh Public Library is gone. I'm guessing that the Department of Public Works finally hauled it away (I doubt it was Santa's elves). Good job.

The fill is kinda muddy but unlike the scab it will allow grass to take root -- whenever spring rolls around again. Many people going to PPL cross this spot and others have mentioned that a walkway should be installed here. That might be an option if foot traffic inhibits new grass from growing.

Remember when the economy was humming along, doing great? Financial experts warned that more Americans should be saving money, putting it in the bank. Minimal savings meant flirting with disaster.

Then the economy tanked. The financial experts changed their tune: Don't save money. Spend it! It'll help to jumpstart the economy.

Now medical experts say you don't have to glug 8 glasses daily. In fact, they don't know who came up with that crazy standard.

The biggest health-related warning was using antibacterial soap and hand cleaners. Medical experts proclaimed that the overuse of such products would make bacteria and viruses mutate into drug resistant strains.

Now the experts tell us to use germ-fighting products all the time to stave off the threat of swine flu. Make sure to wash your hands with antibacterial soap and use hand sanitizer wipes or liquid at least 8 times a day.

Sometimes I ignore experts. Do you? 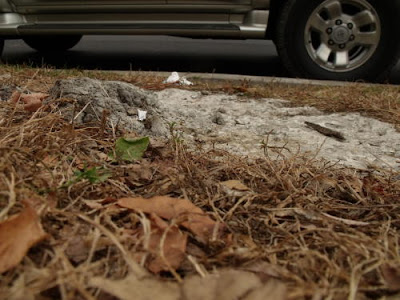 Months ago I posted another image of this concrete scab lurking outside the Plattsburgh Public Library. It's been there time immemorial, apparently excess concrete left over after the PPL front steps were fixed. I thought this would be removed after Oak Street had been repaved.

Maybe it was dumped there to fill in a hole between the curb and the sidewalk. But who would fill in a hole and leave such an uneven surface, especially with a large rocky knob sticking up?

Then it dawned on me: this must be the city's answer to the abstract art seen around the Plattsburgh State campus. Grotesque hulks slapped together with minimum thought, works of deteriorating concrete and rusty metal – good for the environment, of course. The concrete scab outside PPL must be a scaled down version of such creations but with an interactive feature.

The interactive feature is that someone trips over the scab, breaks a leg, and sues the city.

Duck And Cover (Your Ass)

Let's take a look at the record.

Yesterday in his Is It Just Me? commentary (12/3/09) he was going on once again about the Plattsburgh Public Library. He has previously stated that PPL thinks it is more important than other city departments like fire and police when it comes to the matter of its budget.

But in his latest commentary he did admit that the PPL was “a great place” and that it “does offer a great many fine services to the Plattsburgh community.” If that's so, why did Ducky in a previous broadcast propose to completely shut down PPL? Is PPL worth it or worthless?

Ducky in yesterday's commentary referred to some vicious emails and other responses he has received in the past. Some of those responses he wouldn't repeat. He stated: “I air responsible opinions, not ones that have personal attacks."

Let's back up a bit. Ducky stated in an earlier commentary also critical of PPL that he was expecting to hear from some people who disagreed with him. He added: “Who would have thought the stereotyped little gray-haired librarian could be so vicious?"

Yup, that's not personal. Especially using a stereotype to tar brush a group of people.

Let's look at another one of Ducky's statements from yesterday:

"Maybe when I commented about giving raises and bonuses to staff members [in a previous commentary] I went a little overboard.”

What he refers to is this statement:

“Did you know the library, unlike any other department, controls all the money that they receive in their budget? While all other departments have to account for their budget money to the [city Common] Council and how they're going to spend it, the library can do whatever they want with the money. They could give it all for employee raises, they could give their employees paid vacations, they can hand out bonuses. They can do whatever they want with their budget money.”

“Maybe” Ducky went “a little overboard” with that erroneous claim?

Apparently he thinks no one pays attention to what he says. That he can duck and weave like a verbal boxer, letting his previous dubious comments disappear into the memory hole.