A photo of some business reps and the Chamber of Commerce president sitting around a restaurant table. So what's the big deal?

Some Clinton County citizens are upset over the decision to change air carriers at the Plattsburgh International Airport. They question how the deal was made. Garry Douglas, President of the Plattsburgh-North Country Chamber of Commerce, backed the switch to the new carrier, ending up as a lightning rod for criticism.

Even though the decision was made some time ago, there were a couple of details I wanted to check out online. My Google search revealed a few intense remarks regarding the deal and Mr. Douglas in particular.

In a Cheers and Jeers column dated 2/15/10 the Press-Republican noted the Chamber's newsletter "Vision" announced that Colgan/Pinnacle would be flying out of PIA. The newsletter was sent out Thursday, Feb. 4, the morning after the CC Legislature spent a couple of hours debating whether to drop Cape Air for Colgan. The PR editor adds: "Obviously, the piece was written well before the vote."

The editorial also says that Douglas's successful "prediction" was giving "rise to speculation that some kind of deal had been pre-arranged, which we find unsupportable."

Unfortunately that POV isn't unsupportable to some readers who responded to that Cheers And Jeers item. Keeping in mind the comments were made anonymously, a few had their own "jeers" for Douglas. The commenter Anonymous @ 10:46 AM wrote: "...there defintley [sic] was a some sort of backdoor deal. The night of the council meeting, Feb 3rd Garry was cheering it up at the Irises Cafe with the representitive [sic] with Colgan/Pinnacle airlines. Along with some other croonies [sic] they wher [sic] acting and celebrating like the deal was set in stone. There is even a photo of happy gang at the table."

Other commenters mentioned the same image. One reader suggested someone should submit the photo to the PR to be published; so far no one has submitted it or the PR hasn't bothered to run it.

I dug a bit and found the photo in question over at www.topix.net . Here it is: 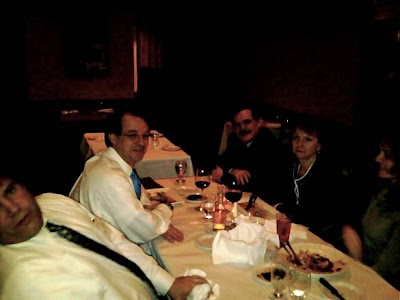 Despite the poor quality Chamber of Commerce President Garry Douglas can be seen in the background "prematurely celebrating."

The photo page includes three pseudonymous comments about Douglas, all negative, especially this one: "Surely he got more than just dinner for this deal. Anyone find out what the 'Deal' was yet?"

As far as I know Douglas hasn't responded to such negative remarks. Maybe he thinks that acknowledging such "trash talk" would end up validating the criticism in some people's minds.

In the meantime the criticism hangs there in cyberspace.