Seeing But Not Spotting


Nighttime. It looked like an old leaf hanging on the wall in the dim light, maybe stuck there by some spider-webbing. Of course that's what nature wanted me to see.

My friend Dean wasn't fooled. He's something of a nature buff who enjoys hiking in the Adirondacks. "I think that's a moth," he said.

I looked at the object outside my apartment building, dully illuminated by the side entrance lights. I told him it was just a dried out leaf. But he insisted I take a closer look.

I did. A moth with the colors and shape of a dried out ragged brown leaf was hanging on the wall. After Dean left I hauled out my tripod and took some shots but without flash. The moth was parked near a window to someone else's apartment. Even with the blinds closed tight I knew the renters in there might wonder about the bright burst when my flash went off.

I did a time exposure with a ten-second timer countdown and used the mirror lock-up feature on my DSLR to minimize vibration. I had to when I ended up with an exposure lasting 25-30 seconds. The lighting at the entrance really dropped off where the moth placed itself.

So despite training myself to look for potential images, I still need a second set of eyes to spot what I overlook. 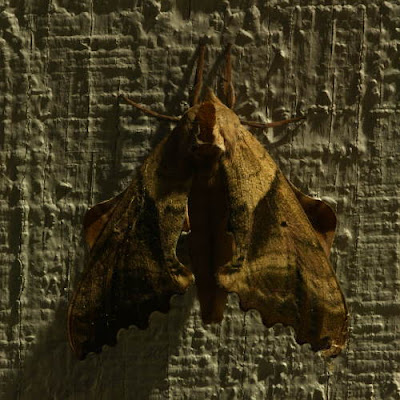