​BolaWrap: As Seen On TV! 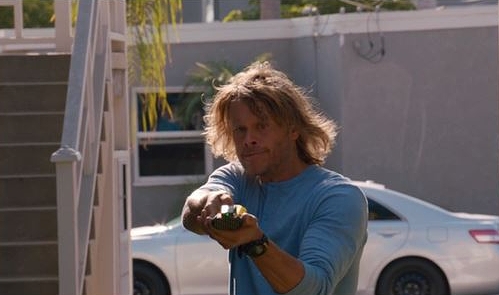 Wow.  When I grow up I wanna be a NCIS cop with a BolaWrap gun.

In a previous article I discussed BolaWrap, a less-lethal/nonlethal device that fires Kevlar lines at a human target.  The lines immobilize the target by wrapping around that person, four-pronged barbs holding the lines in place.  This device is intended to safely deal with non-compliant people including the mentally ill.

Now if the barbs dig into thick clothing, no problem.  But the barbs can also dig into bare flesh.  A misfire could mean the lines could wrap around someone's neck instead of the legs.

In a demonstration video there aren’t any problems when someone walks away at a measured pace and is BolaWrapped.   But when someone is running they take a hard fall but fortunately in the video the target is on a soft lawn or sandy area. Someone slamming down on pavement might end up with a busted nose or loose a few teeth.  Is this the way to treat the mentally ill?

The last segment in the video shows a scene from NCIS: Los Angeles, a fictional TV crime show.  BolaWrap also appeared on another CBS police drama, S.W.A.T.  Talk about product placement.  And with TV production you can do a retake if the line wraps around the fleeing suspect’s neck or he takes a hard fall, breaking his jaw.  Save it for the blooper reel.

After stopping the suspect the NCIS agent observes how BolaWrap makes him feel like Batman.  Yup, let’s invoke comic book fantasy.  Some critics have called BolaWrap the Batman lasso.

Critics have observed that using BolaWrap on a mentally ill person is dehumanizing, treating them like an animal.

Coverage of an incident in Buffalo, NY shows the opposing views on BolaWrap.  In what appears to be a news article through GlobeNewsWire there was the successful use of the device when the police were dealing with a woman suffering from a mental health crisis.

"Police say they spoke with the woman for an extended period of time, asking her to get in a police car and receive medical evaluation. The woman refused, which police say prompted them to deploy the Bolawrap.

"The device allowed police to transport her to Erie County Medical Center for evaluation without anyone getting hurt, according to police.”

Note that GlobeNewsWire distributes press releases, not actual news articles that look at all sides of an issue.  GNW’s stated purpose is to disseminate press releases to a maximum audience while increasing SEO.

As for a real news article vice.com covered both sides of the controversy.  The incident in Buffalo included some extra details.

The BolaWrapped woman was only wearing a t-shirt in freezing temps.  A witness told a local news radio station the woman wasn’t given warm clothing or a blanket after she was snared.  The witness added that a mental health professional was on the scene but no attempt was made to calm the woman down, deescalating the situation.

Sometimes it’s worth the effort to read a press release to the very end.  The GlobeNewsWire has a disclaimer entitled Cautionary Note on Forward-Looking Statements – Safe Harbor Statement.  In part this disclaimer tells readers the forward-looking statements can mean risks, the Company’s actual results might be completely different from the Company’s statements.  It goes on to cover all bases including “government regulation,” “defects,” “litigation,” and even “outbreaks of disease.”

Ever see such a disclaimer at the bottom of a news article?

A society that used to force incarceration of those deemed "odd", "weird","potentially menacing/dangerous" or "mentally unstable" into state-run mental institutions (completely against their will and without the slightest modicum of due process) shouldn't be trusted with having any kind of empathy or compassion towards anyone considered a "misfit" or "undesirable".
Social-rank fascism still lives underneath this modern-day charade of "anti-hate", not only economically but also categorically as well.