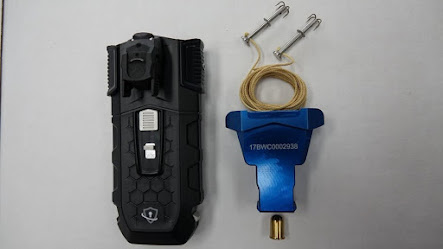 The other day WCAX-TV news showed the demonstration of a new non-lethal / less-lethal restraint for when police are dealing with an uncooperative person.

The demo was held at a local fire department with law-enforcement officials and the city mayor in attendance.  The device created by Wrap Technologies is called BolaWrap.  It was inspired by a throwing weapon called bola used to entangle fleeing animals.  A bola is a combination of connected thin cords (usually three) with weights on each end of the cords.  When thrown the bola spins through the air until it makes contact with the target’s legs, wrapping around the legs to immobilize the animal.

BolaWrap is a high tech version of the bola but instead of weights it uses hooks, each one with four prongs, to entangle the target.  The lines are made of Kevlar.

In the videotaped demo Mayor Chris Rosenquest is seen standing still and then there’s a flash-bang, the lines wrapping around his pants, hooks holding the lines in place.

But the mayor was standing still, not running.  Also noted in a front page article in the Press-Republican (weekend print edition May 22 & 23, 2021) the Wrap Technologies representatives asked the mayor to wear thick sweatpants over his normal clothes.  He stated the hooks didn’t hurt.  But what if someone is wearing thin pants or shorts?  I’m guessing that at the high velocity the BolaWrap is fired (513 feet per second) the hooks would find it easy to penetrate soft flesh.  The BolaWrap trainer during the demonstration mentioned that flaw.  Also when the person is wrapped and stays still, no problem.  But if they try to move the hooks dig in.

During the WCAX news segment a Wrap Technology representative stated that BolaWrap would stop injuries and lawsuits.  If there’s a real screw up I can see someone losing an eye.    (No lawsuit, huh?)

A photo accompanying the PR article shows the mayor standing with his arms crossed on his chest.

The Washington Post mentioned in an article published last year that at one demonstration a police chief got hooked in one of his hands.  He stated: “I had my hands too low and it was my fault.”

According to a Reuters article the electric shock from Tasers killed 49 people in 2018. The search is on for a less deadly device.

It’s commendable that the recent effort for police reform is considering other non-lethal / less-lethal devices to control a noncompliant person.  Wrap Technologies says their device can be used to restrain a mental ill person or someone on street drugs..  I can imagine how a severely agitated mentally person or drug user would react when trapped by a BolaWrap.  Instead of spending more money on high tech devices governmental entities should use their funds to support mental health services.