There's A Law; Now How About Some Enforcement?


Below are excerpts from the City of Plattsburgh charter dealing with the matter of dog feces. If the city is whining about no money, how about a few fines to balance the budget and also to motivate a few pigs to pick up after their dogs?

The other night I was sitting in a car with a friend across the street from Trinity Park. I noticed someone with a leashed dog in the park.

"Watch this," I said to my friend.

The owner let his dog squat and shit. Then he walked away, leaving the crap for someone else to deal with.

All the city needs to do is have a police officer in an unmarked car sit near Trinity Park and hand out fines to scofflaws. After some enforcement, the word would get out and more people would pick up after their dogs.

I find it interesting that when something goes down you see three, four, even five police cars, lights flashing, speeding along to a scene. What are all of those officers doing the rest of the time? It seems one officer could cover downtown a couple of hours each evening.

Now someone might be thinking: Why didn't you and your friend say something the other night to that idiot in the park? Ain't our job. Also, if we did say something, the guy might create a real scene and file a complaint with the cops against us.

Sounds crazy? Not really. Years ago one mayor told citizens to yell at anyone not picking up after his dog. Shortly later there was a letter in the newspaper from a woman, a concerned citizen, who did that. The woman wrote that the dog-owner complained to the police and she, the concerned citizen, was almost charged with harassment.

There's no reason not to enforce what's plainly written in the city charter. Here are the excerpts; click on the image to make it larger. 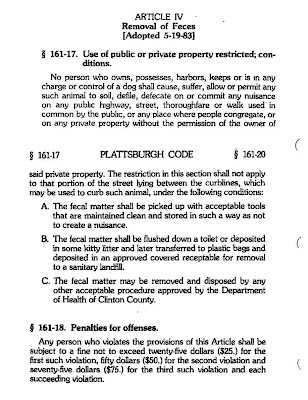 And for those of you who don’t think there’s a problem with dogshit in Plattsburgh, check out the ad nauseam examples at http://dogtown12901.blogspot.com .

I think the dog poop problem as well as dogs not on a leash is getting worse and worse. I wish the police would enforce the laws regarding these issues --and I own a dog. You should hear me cursing as I walk my little dog every day and have to constantly dodge the piles of poop on the SIDEWALK! --and grab him up when some dog not on a leash comes dashing over. I'm sick of these ignorant, lazy, law-breaking dog owners. Fine them all --PLEASE!

What idiot would have the police take care of dog crap? Thats what animal control officers do. Anyone that just sits in a car and watches it happen and says nothing is just as bad as the person with the dog. Glad we don't have to rely on you to stop bullying. Oh right...Not my job man.