Nighttime. Working with my camera. I was getting into the zone when two police cars showed up.

Earlier, around dinnertime, I had noticed large pieces of chalk, the kind kids use to scribble on sidewalks, broken and scattered in the entrance area to a schoolyard. School was closed for the day. No cars or buses around. I tried some macro shots, getting down low to get an offbeat wide-angle perspective, making the best of the evening sun. Then I left; no one said anything. 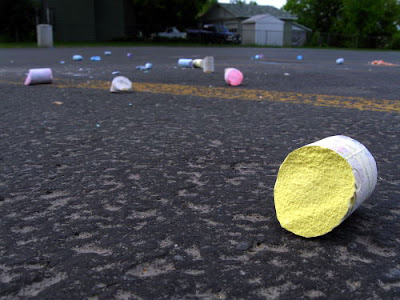 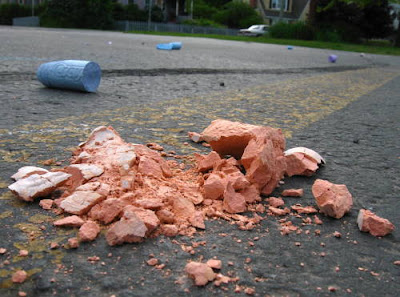 After the sun had set, around 9 PM, I noticed a crescent moon low to the horizon with some sketchy clouds. So I grabbed my tripod and went over to the schoolyard where I had a good view, no powerlines or streetlights in my way. 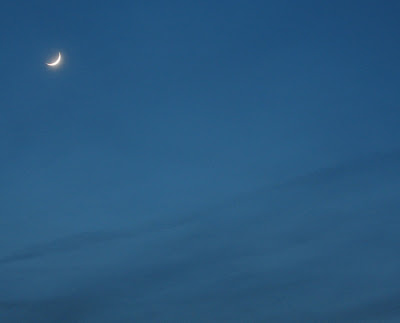 I remembered the sidewalk chalk at the entrance. I thought how the nighttime lighting would create a different feel. So as I had done in broad daylight, I tried some down-to-the-ground macro shots. I played around with my settings on my camera, exposures, color balance. I was starting to get the get into the process, feeling comfortable with what settings to use, how to compose the shot, what views looked the best.

There’s a side street that faces the school entrance. At one point I noticed a car parked at the end of that street, its headlights aimed at me. I suspected that someone was watching me.

Two panda cars (to use the British term) pulled into the lot. One officer from each car joined me. They inquired about what I was doing.

I explained to them that I was just taking photographs. They said they had a report of a man in distress. Apparently while I was crouching down I appeared to someone to be suffering a heart attack or was passing out from too many drinks.

The officers were polite, no real hassles. I told them I didn’t expect to create a “commotion,” adding that maybe I should call the Plattsburgh PD in advance of any picture taking. One officer advised me to do that.

After they got my name, address, phone number, and birth date, the officers told me it was OK to continue shooting. Unfortunately the distraction had made me lose the zone; I cut it short. I understand they were doing their job but I didn’t end up with the images I was wanted. So it goes.

Before the police left, one also asked me if I wrote the graffiti on the pavement, I’m on a boat bitch. I told him no.

I might be a crazy photographer but I ain’t a crazy artist.