Close, But Not Close Enough

If I only had a different camera with me, a DSLR with a fast telephoto zoom…

But all I had was my widget compact camera and so I have to make do with these images. 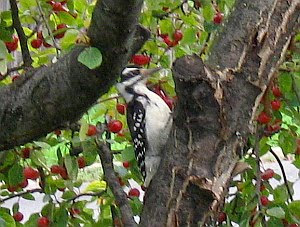 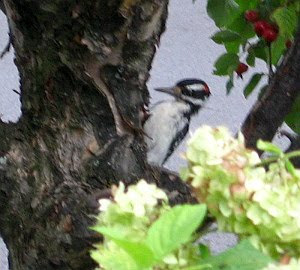 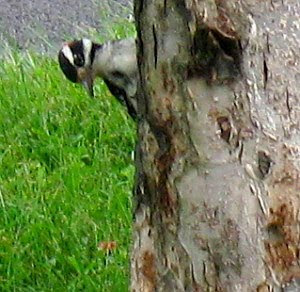 At least they give enough detail to help me ID the bird – almost. I’ve narrowed it down to a Downy or Hairy Woodpecker - maybe.

The other evening I was walking along when I heard short sharp chirps right next to me. A small tree laden with red berries stood between the sidewalk and the street. While audibly obvious, the source of the noise was visually shy, hiding within the tree’s leafy branches.

Suddenly something flew out, darting to the next red berry tree down the sidewalk. It looked like a woodpecker; time to take out the camera.

It was cloudy, not that much light, and zooming out my compact camera’s lens really slows it down (to f5.6 for you photo-techies). That meant a slow shutter, a real problem with handholding. So I had to zoom back, a smaller image, but even that was a trade off because to enlarge the image made the noise/unsharpness even more pronounced, as you can plainly see.

I had the ISO set to 100 and if I had the time I would’ve tried upping it to 400. But chasing this quick bird from tree to tree didn’t give me that opportunity. When he was hanging low on a trunk, he would dart around, playing peekaboo.

Besides visually, I’ve tried online to aurally ID him, playing back recordings, but the Hairy and Downy sound alike. Does anyone out know what species he is?

Thanks for that link. I didn't come across that page during my quick Google search. From that visual comparison, it indeed looks like a Hairy Woodpecker by a nose - or I should say, by a beak.