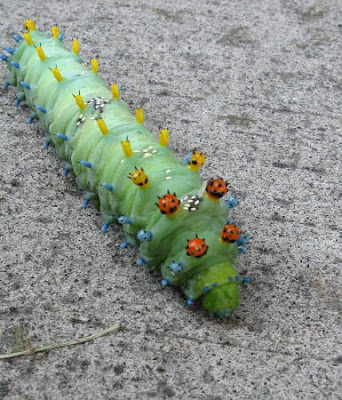 I got the shot. A caterpillar crawling along the sidewalk into the grass. But the question remained: What kind was it? From its light green color I thought it might be the larva of a Luna Moth.

I searched with Google. Failure. I tried the public library, bugging the reference librarian. He used the digital card catalog, linking up with one of those old-fashioned things called books. Success.

According to Peterson First Guide to Caterpillars of North America (Amy Bartlett Wright, 1993) what I happened upon was indeed a moth caterpillar but one that would transform into a Cecropia (Hyalophora cecropia, for you Latin lovers).

As you can see, this particular larva is bizarrely built and imbued. There’s those black areas with white spots that look like dice or dominos, depending upon your angle of view. Notice the blue and yellow tubercles along its body? The yellow ones look like tiny birthday candles. And the four red tubercles near its head with their bristles make it look poisonous, unsafe to touch. There are a few caterpillars that can irritate bare skin, producing a rash, but Cecropia isn’t one of them, according to the Peterson guide. 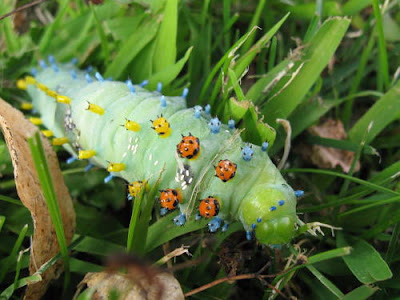