The Framework Is the Cause 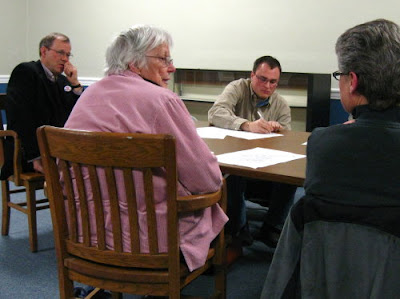 Francesca Hartnett (center left) makes a point during the organizational meeting of the City of Plattsburgh Neighborhood Association.

At one point during the meeting someone asked: “What is the cause?”

She was trying to get a handle on what the City of Plattsburgh Neighborhood Association was about. With an umbrella organization it can be difficult summing up the diverse activities under its auspices in a few words.

Previous to this meeting a steering committee of concerned citizens had outlined the structure for the Neighborhood Association. Around 20 people gathered Tuesday evening in the City Hall conference room to learn more about the group and help organize it.

Meeting coordinator Stuart Voss discussed the broad structure of the proposed association. There would be an executive committee that would work with representatives from four zones designated by the steering committee. Each rep would provide outreach in the neighborhoods in a zone, identifying key issues.

But the NA as envisioned wouldn’t be locked into a strict hierarchy. Voss explained that it could work on both local and citywide levels at the same time. It was important to get feedback from citizens and have them network with each other.

This somewhat loose structure could mean that neighborhoods with overlapping issues could work together and address those issues in their part of the city. General issues would mean all NA members would approach city officials en masse.

During the meeting various problems were mentioned, from unleashed dogs to litter to rising taxes. It could be confusing for someone unfamiliar with an umbrella group. What was the focus? Or as one woman had asked, what was the cause?

The NA, explained Voss, wasn’t about a particular cause being put forth. The organization would help to identify issues and use citizen advocacy to press for needed changes. “The framework,” he said, “is the cause.” 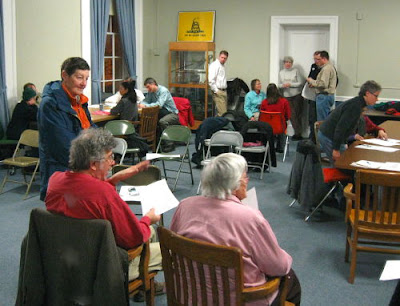 To elect representatives the attendees gathered into small groups broken down by zone. Then the groups re-met as one to announce their choices. I didn’t sit in with any group. I was there as an observer (albeit a semi-objective reporter). While I walked around the room to take a few photos, I had a good overview of the NA structure: localized and citywide at the same time.

At this point the plan is for the NA only to have a couple of general meetings during the year. The concentration will be on outreach, recruiting new members, and overall promotion.

Nancy Monette was elected as president, Doug Butdorf as 1st vice-president, and Valerie Raugi as 2nd vice-president. As 1st VP Butdorf will be responsible for maintaining communications among the neighborhood representatives while 2nd VP Raugi will have the duty of identifying issues.

For more information on the NA, call Nancy Monette at 561-8225 or email her at nmonette@charter.net .


UPDATE (3/17/09): In the comments section accompanying this post I address the issue of “politico-babble.” Feel free to join the discussion.

Nice move. A refreshing grass-roots voice and local solutions mechanism. Too often, small troublesome issues remain in the neighborhoods and fester, only rising to the formal political level when a saturation point is reached. Sounds like self-government is alive and well in Plattsburgh.
KG

I could be wrong, but is there not an elected city government in Plattsburgh whose job it is to deal with community issues? Instead of inventing another layer of politico-babble, perhaps casting a well-informed vote in the next election might be enough; as opposed to electing the kind of clowns that have been "Mayor" of Plattsburgh in recent times. Also half of the people mentioned were solid suppoters of Chris Ortloff before his little mishap. Oops!

Anonymous #2: What does Chris Ortloff have to do with anything?

As for elected officials whose job is to deal with community issues: Sometimes those officials don’t pay attention. It was mentioned during the NA organizational meeting that the group wasn’t formed because of the present administration. For too long citizens found previous administrations unresponsive to their concerns. Previous to NA there was another group called FAIR. One time the city asked a FAIR member to do some research but ignored the results of that research when it was presented. One person described it as the elected officials being “too rude to listen.”

As for casting a well-informed vote: that’s only part of the picture. The other part is citizens keeping track of what politicians are doing, especially promises that were made during the election. Any clown can vote and walk away. The true citizen voices opinions, making sure that elected officials are paying attention.

You can call that another layer of “politico-babble” if you want, but the point is most politicians prefer quiet, unaware citizens. The ones that pay attention are a pain in the ass. But that pain is basic to the democratic ideal.


Anonymous #1 (KG): Thanks for the comment. I’m afraid you’re going to have to deal with cynics like Anon. #2.

There have been far too few council members who have truly worked with the serious issues that have existed for years in this city. One of the most evident issues is the condition of the city properties, streets and neighborhoods. That is one area that if given attention and action, could help turn around some of the other problems that cause this disgrace and deterioration. It is almost impossible to go for a walk and enjoy that outing without being sickened by the debris, litter, poop, unkept sidewalks and properties. A walk should be uplifting, but our city government can't even make that happen because they appear to not care about any of these issues, OR if they did, we would hear and see them trying to help the many residents who have asked for help for MANY years. Politicians promise and promise their help and attention during the campaign, but as we all know, that falls on deaf ears after election. We also need to have specific comments in writing when we elect new council members and hold them to their promises. Many of us are really disturbed that so many promises have not been kept.
Anonymous