Two Feet, Too Much

Sometimes a photograph fails to show scale, especially when there’s no reference to compare relative sizes. So here’s another shot of that public library step with a ruler. 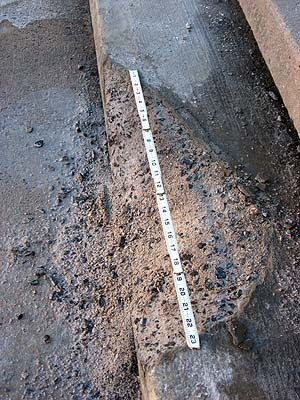 As you can see, at its widest, this gouge is two feet across. So how will patching it up with more compound make any difference? Also, would a building inspector allow this to pass if this wasn’t municipal property?

In the past I’ve talked about The Big Picture. This image of a relatively minor problem reflects the big problem: not enough money has been spent on the city’s infrastructure. If buildings and streets can’t be properly maintained, then the city of Plattsburgh shouldn’t be expanding into other areas. It should fix what it already has instead of spending money on more pipe dream projects.

People judge a community by the upkeep of its infrastructure. What kind of message is the city sending to visitors when the library entrance looks like it belongs in downtown Baghdad?

Having lived around the corner from the library for over 10 years, I've watched the evolution of this problem.

I'm no concrete specialist, but my opinion is that this was never properly repaired in the first place. Also, repairs were done "as needed" and not during optimal conditions for concrete work. Why can't whoever is responsible find a professional mason to evaluate and repair this?

It comes as no surprise that basic infrastructure is being ignored while pipe dreams like the empty parking lot remain. I wonder how many city councilors actually use the library?