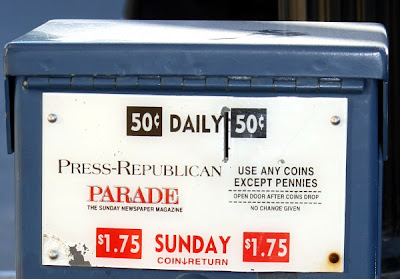 Plattsburgh’s daily newspaper boasts that it’s “The hometown newspaper of Clinton, Essex and Franklin counties” but with changes on the way it will be less “homey” than before.

Word on the street: belt-tightening at the Press-Republican means that local employees are being let go as some aspects of the operation – such as the art department – are outsourced across the state or out of state. Also, the budget for free lancers is frozen, the paper preferring the less costly alternative of running Associated Press stories and utilizing college interns.

The PR is owned by Community Newspaper Holdings, Inc., a private company which is turn is financed by the Retirement Systems of Alabama, a pension fund for Alabaman state employees. Obviously the owners want a good return on their investment to keep the big boat afloat.

Some staff members who still have a job must take unpaid furloughs. A furlough doesn’t sound that bad: it suggests a vacation. It actuality it’s a pay cut. One week off, one week’s paycheck lost.

The PR has defended the cuts, faithfully serving its masters at the Main Office in Alabama. In an editorial entitled "No sympathy for selfish profs," the unnamed writer chastises SUNY professors unwilling to engage in mutual sacrifice and take furloughs, unlike PR employees.

Justifying the decision made by the PR's owners, the writer stated: "We knew it was keeping us all working and will eventually end." The writer wraps up with this statement: “Bring on the furloughs.” The editorial is dated May 9, 2010.

At some point the giveaway becomes masochistic. How much suffering at the Main Office? Any furloughs brought on there?

The pursuit of profits today usually means disaster in the future. Previous staff and pay cuts at the PR have resulted in less quality editions. Some readers like to spot stupid typos that provide cheap chuckles. But that’s what happens when you get rid of your proofreader and think “the computer” will catch any errors. Moronic misspellings still slip through, especially ones that a spellchecker program would immediately red underline.

Declining quality means declining readership. Wringing out all the blood means you end up with an unprofitable stone.

Recently there has been a subscription increase and some readers have canceled. Maybe the Main Office should brush up on the concept of price point.

Apparently no one at the Press-Republican has heard the term “hyperlocal.” The strength of a hometown newspaper is local coverage. So why bother with so much national news when most people can get the same stories online for free? Save some money, drop the expense of subscribing to a newswire, and spend the difference on beefing up the reporting staff, people with experience who can put out quality material.

Maybe unpaid student interns will make up the slack for paid freelancers. But why go to college and major in newspaper journalism when there won’t be any jobs after you graduate because another round of interns are providing free copy?

If you’re going to work for free, especially for an organization that stresses profit over journalism, you might as well start your own blog. A good working situation should involve mutualism, not parasitism.