Mantra For A Cool Rainy Evening 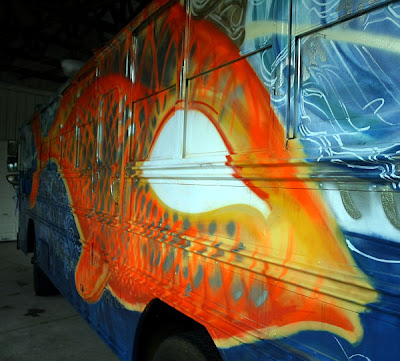 Under the protection of the Farmers Market roof a free lance visual artist carefully adds more detail to the old school bus, his wraparound mural a striking contrast to the dreary weather.

The air grows chillier as the evening progresses. Gray rain clouds have concealed the sun all day. What light Gabriel Leavitt does have is fading, making his detailing more difficult. Pausing from his work, Gabriel estimates that he has spend eight 12-hour days working on the bus for the Plattsburgh-based band Lucid.

He had also painted Lucid's other school bus, Lucy. She was a big hit with fans but the old girl was forced to retire after faithfully transporting the rock band all over the region to various gigs. As before with Lucy, Gabriel uses the exterior of the second bus (unnamed at this time) to tell a story with an iterating mantra.

On the driver's side of the bus swims a large orange fish, dragging the band through the calamity of chaos as Lucid travels through the cosmos. The giant fish, explains Gabriel, is an incarnation of God. 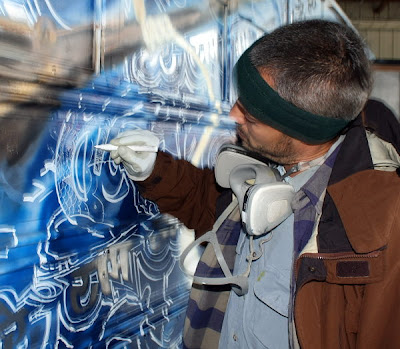 The story can be picked up anywhere, Gabriel says. Besides the Krishna mantra repeating itself all over the bus, there are spots where certain scenes are illustrated. For example, at this point he is using his paint marker to show the creation of seven beings in a magical kingdom.

Gabriel is originally from Plattsburgh City but now lives in Manhattan. He traveled back to his hometown for this project.

When working he completely concentrates on his art, his eyes focused on the details issuing from his paint marker. I hesitate to interrupt him to ask him a few questions. With his scruffy beard, rough brown hoodie and intense expression, one gets the impression not to disturb the creative bear when he's working. But appearances are misleading: Gabriel is happy to pause and discuss his creation. He's really an easygoing person, the antithesis of the temperamental artist. 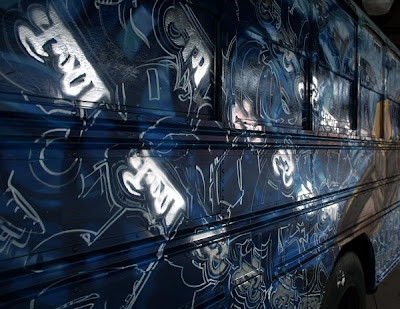 For the bus project he uses multi-media, including spraypainting and stenciling. While he does have an overall design for the project -- Gabriel sketches out the basic pattern -- he does sometimes improvise along the way. Thus the scene of the kingdom and the seven newly created beings.

More information about his art can be found at http://gabrielleavitt.com/home.html . 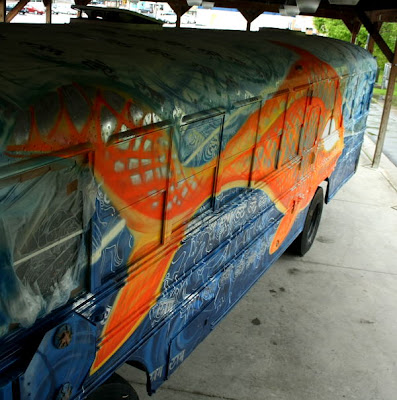