Apparently it only took one day to fix the building on the corner of Bridge and Margaret streets where a concrete panel fell off last Saturday. 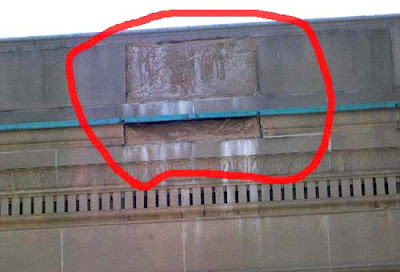 The above image was taken Friday, Sept. 14th at 1 PM. Another panel and a cornice section were removed, as you can see in the area circled in red.

This is the same spot I noted in a previous post that appeared to need attention. A construction worker had pointed out to me that water and ice probably caused the stonework to separate.

When the image was taken the yellow tape and wooden barricades were still up, blocking pedestrians from passing too near. A mechanical lift was sitting on the sidewalk on the corner.

By Friday evening the lift and the barriers had been removed. It seems any problems with the building have been fixed.

Please note I didn’t ask permission to take the image accompanying this post. I was on a public sidewalk across the street. The last time I checked, I wasn’t living either in the Soviet Union or Nazi Germany.