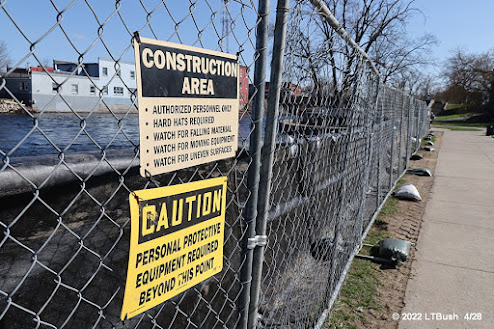 So what’s with the barrier along the Saranac River in Verdantique Park?

I spoke with one of the workers installing the barrier.

Upstream there used to be a manufactured gas plant active from 1896 to 1960 that generated coal tar waste. The solution to dealing with the waste was to dump it in the river, polluting its bottom. A private company has been operating a remedial project, removing the coal tar. The contamination is so severe that when the coal tar is removed it can form globules similar to what is inside a lava lamp.

The river section in front of Macdonough Monument was cleaned last year and now the project will move downstream. This means the river will be narrowed at that point, water backing up. A Muscle Wall barrier – an alternative to sandbags – has been installed in case there’s any flooding caused by the narrow channel. River water is pumped into each section to weigh it down.

Last year someone jumped the Muscle Wall barrier to take a dip in the river. This time the height of the wall has been extended with cyclone fencing to prevent another such incident.

After the river cleanup the project is to move on into Lake Champlain.