Flashback To 2009: A One Woman Protest

A video posted on Facebook and featured in the local news triggered a memory: an encounter back in August 2009.

Recently Zachary Butchino posted an edited copy of a video recorded on Plattsburgh Police Department surveillance cameras inside the station. Back in 2017 Zachery was arrested for assault and taken to the station. He claims that excessive force was used to restrain him. He states he was drunk and suffering from a mental health episode at the time related to PTSD and anxiety

The video shows four officers cramming into the Zachary's cell and after they leave he is suffering a bloody nose.

WCAX-TV News interviewed Police Chief Levi Ritter. (Levi was not chief at the time of the Butchino altercation and was not involved in it.) He said an officer noticed on camera that Butchino was trying to kill himself with his t-shirt. The officers were moving him to another cell and wanted him to remove his drawstring belt. When he didn't comply they piled on.

There's a Facebook video by Zachery that includes the surveillance camera footage and text comments detailing his side of the story. Also added captions appear to be quoting the police officers: “Do you wanna give him the secret handshake?” and “I think it would be pretty funny on youtube.” 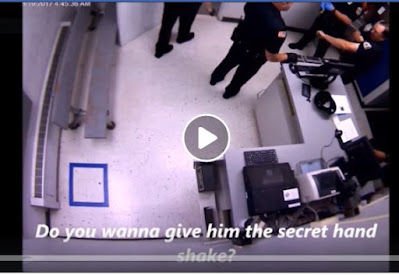 Zachery released his edited copy of the video because he wanted to bring awareness of excessive force by police and the need for more training for officers in handling a mental health situation.

Across the country Black Lives Matter protests against cops who committed indefensible killings of black people has brought the issue of policing to the forefront, some advocating defunding or abolishing the police. The acronym ACAB (all cops are bastards) was painted on the Macdonough Monument base. Not a good time to be a cop.

During the WCAX-TV News interview Levi didn't condone all of the actions the officers had taken against Butchino. He indicated that changes would be made.

Back in August 2009 I posted an article about a mother protesting one night what she claimed was mistreatment of her son by PPD officers.

Andrea Provost two carried protests signs, one with the image of a bootprint. She claimed a PPD cop stepped on her son's face, the mark lasting for two days. She also said the police backed off when they noticed witnesses. She asked for anyone who had seen what had happened to please come forward.

Andrea also alleged the police had threatened her son, saying they were going to beat him up if they had the opportunity.

The last thing I heard about her was she was demonstrating one day and the police asked her to stop. No more one woman protests.

Changes are being made.

The New York State Senate and Assembly repealed a section of the law that had kept police disciplinary records blocked from the public.  Access to those records will allow citizens to learn more details about investigations.

Also Governor Andrew Cuomo signed into law the “New Yorker's Right to Monitor Act” that allows a citizen to record police activity. The act also prohibits police confiscation from an individual of any such recordings and the recording equipment.

As a photographer who has been hassled in the past for taking photographs one less reason to be confronted is welcome.