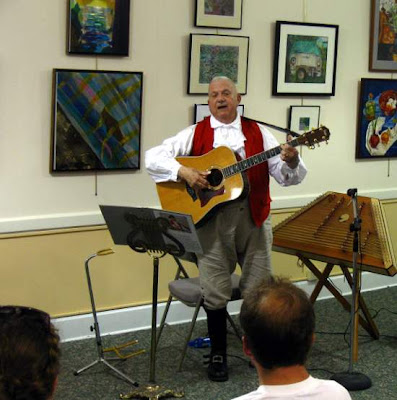 What are these kids doing here?

The thought of a middle-aged blogger sitting in the audience during a performance by Stan Ransom at the Plattsburgh Public Library.

Stan, known as the Connecticut Peddler, sings with a somewhat plain but effectively folksy voice that’s perfect for the traditional works he was collected over the years. After all, it’s doubtful the rough-and-ready men who drove logs down the Saranac River back in the 1800s had well-trained dynamic voices that could fill an opera house.

Stan has also written original works, songs about the Lake Champlain monster and the 1998 ice storm that devastated the North Country. His program is varied: he switches between acoustic guitar and hammered dulcimer, throwing in some tall tales along the way.

The second floor room where he performed yesterday evening, the Helen Ianelli Gallery, was roughly divided into two sections of folding chairs. Facing the performer, most of the people to the right of the support column were around my age, the gray-haired types.

But that section didn’t offer me a good view to take photos. So I found myself on the left side, sitting in a section predominantly composed of listeners in the high school – college age range (AKA “kids”). One would expect that the young crowd would be more interested in hardcore/punk than the traditional songs and stories offered by Stan.

Maybe there were here for a school project, some to do with folklore and history. But this is July and school is out of session.

A study in contrasts. The oldsters: semi-casually dressed, pants, slacks, nice shoes. The youngsters: a bit more casually dressed, loose t-shirts and shorts, sandals, tattoos and iPhones. (Me, I fitted in better with the latter crowd, baggy shorts and a t-shirt, a clean but comfortably clothed slob. But no tats or cellphone.)

The younger crowd was just as attentive as the older one. They even knew the lyrics to Stan’s songs, at one point joining in and singing the chorus to one of his originals. One “young adult” (to use the formal designation) even requested a song during the break. Stan played along on his guitar as a few of his young fans tried to remember the lyrics.

After his performance the young fans spoke with Stan, asking for autographs. A rock star moment. While his works today are available on CDs, Stan’s first compilation was recorded on that ancient technology called a "cassette tape" back in 1991. One young fan had the cover to that tape autographed.

After all these years with his works in circulation, a new generation has discovered his efforts. Another generation that will keep alive the tunes and tales of long ago. 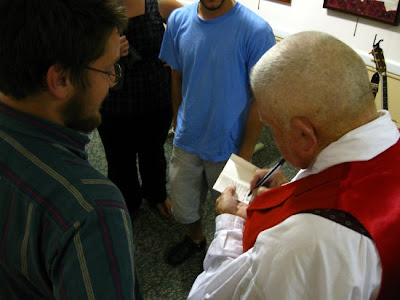 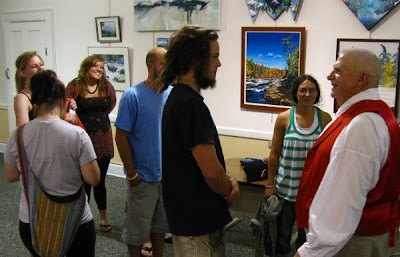 Luke, I really appreciated your comments and photos on my performance last night! Great job! I was somewhat puzzled at the high school/college crowd. They liked my first release "Down the Saranac," and I have orders for more tapes! They knew the songs but none admitted to playing any music instruments. I was happy they were there to help pass on the traditional songs to a new generation. I guess that's why I do it, because I am always concerned that some of our musical history could be lost, unless it is learned and passed along by the new generations.
Thanks, Luke, Stan Ransom

Luke, I was one of those young adults present during Stan's performance. And it's true, he did have quite the following among us college students over the summers we spent in Plattsburgh. As i've written, "Down the Saranac" is a charming expose of Clinton County; Stan brought the creativity and playfulness of a songwriter and storyteller to what had largely been a collection of news articles, manufacturing caricatures about the North Country and firmly establishing pride in its quaintness. i still have "Down the Saranac" as well as "Songs of Lake Champlain." Perhaps a wake up call to the elders? we don't all listen to punk-rock and emo...