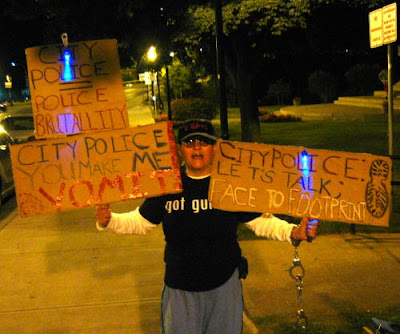 A summer night with an early autumn chill. Across the street near the MacDonough Monument a woman holds up handmade protest signs accented with tiny blue lights. She is excitedly talking with someone. Why is she so upset? Why such heat on a cool pleasant evening?

To get answers, ask questions.

I approach the woman, asking if is OK to photograph her. She agrees. I ask her why she is demonstrating. As I take still images and video, she explains she’s angry with an officer of the Plattsburgh Police Department for using excessive force when arresting her son.

The woman – who says her name is Andrea Provost – is emotional while making her claims. She states that a week ago, August 21st, at around 7 PM her son was arrested on a bridge. I ask which bridge. She gestures with a protest sign towards the Saranac River, indicating the footbridge that runs parallel to the railroad trestle.

Her son, Dustin Provost, she explains, was arrested for failure to pay child support. While she doesn’t condone all of her son’s actions, she said because she was Dustin’s mother, only she had the right “to kick his ass,” not the cops.

Andrea Provost wears a black t-shirt with a logo that is a variation on the “Got Milk?” promotion. It reads: “Got Guilt?” Two pairs of handcuffs hang from her right wrist.

One of her signs has a bootprint drawn on it. She claims that her son had a bootprint on his face for two days from the police overreacting. She adds that the police backed off when they noticed witnesses to their brutality. She asks that anyone who witnessed the incident to please come forward.

Some young people stop, listen to her for a while. They remain quiet, no comments or questions. I wonder how they regard the police and this woman’s allegations.

Andrea Provost won’t mention the name of the officer who she says hurt her son. She alleges that certain police officers had threatened her son, saying if they had a reason to get him, they would beat him up.

She sketches the outline of a cover-up. The arrest wasn’t mentioned in the Press-Republican. WPTZ-TV Channel 5 didn’t cover the incident because its anchorwoman, Stephanie Gorin, is married to the police chief. (Not the first time I heard this issue raised, the potential conflict of interest.) She also angrily claimed that the police prevented the hospital from taking photographs to document her son’s bruises, but x-rays were taken of his fractured wrists.

So I asked questions, got some answers, and ended up with more questions. What really happened? I only got one part of the story, one POV. Maybe the Plattsburgh PD will respond and maybe the local mainstream media will look into it.

In the meantime, Andrea Provost stands out there with her unflattering protest signs that say “CITY POLICE YOU MAKE ME VOMIT” and “CITY POLICE: LET’S TALK; FACE TO FOOTPRINT.”

Freedom of speech in action. And a public relations problem.

I've always felt that the Plattsburgh PD could be a little more community oriented in their communications.