As mentioned in a previous post, there was a problem with pigeons roosting inside the Strand marquee. Work was done, removing the signs and upper structure, leaving just the overhang.

But after all that effort, I noticed pigeon crap still underneath the marquee. Instead of carpet-bombing all over the sidewalk, the pattern was now in a rectangular shape, following the outer outline of the marquee. 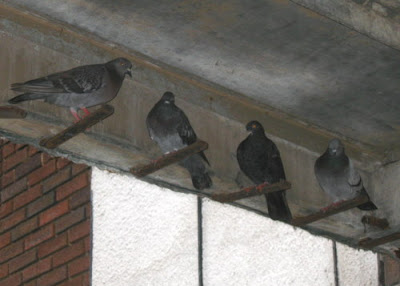 Today I discovered why the problem has remained. The ceiling underneath was also removed, exposing metal brackets along the inside perimeter, perfect perches for the pigeons.

Now the mess is more concentrated, thanks to the brackets.

Solutions? Bend up the brackets or block them with wire mesh to prevent roosting. Or install those sharp metal spikes used on ledges to keep pigeons away.

And after that problem is fixed, hose down the sidewalk using some water and bleach with the vigorous application of a squeegee or a push broom with stiff bristles. Then take any tools used in the clean-up and drop them off at a hazmat disposal station.