A notable photo and caption appeared yesterday (Fri. 3/6/09) in the print edition of the Press-Republican on page A5: 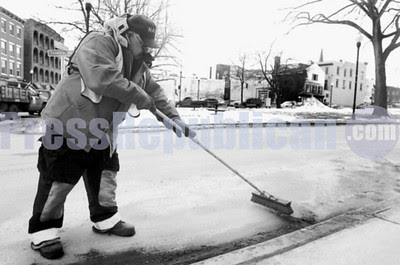 Terry Prentice, a laborer for the City of Plattsburgh, cleans the street near Trinity Park. As the snow recedes, all kinds of trash is [sic] suddenly uncovered, and the city's Public Works Department is working to get it cleared.
(Staff Photo/Kelli Catana)

All kinds of trash are being uncovered? What about the lawn in the park? I’d hate to be the DPW worker who has to deal with the litter left behind by the rude dog-owners. But that’s how some self-centered people act: “The city worker can shovel up after my precious Fido. That’s his problem, not mine.”

The lawn in the park is so attractive for a afternoon relaxztion in the sunny spring. But what's the feeling if we find litter sticked in the trousers when standing up.

I respect the city worker, but do we respect ourselves?

I think we have the same question.