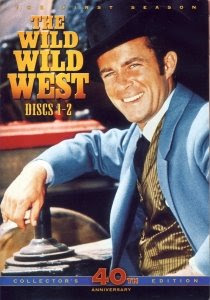 Back in the 1960s the character of superspy James Bond was the big thing. Of course, that meant all sorts of variations and imitations came along to cash in.

On TV there was The Man From UNCLE about a pair of agents (one American, the other Russian) who worked for an international law-enforcement agency (think United Nations). After the success of that program, the following year (1965) another superspy series debuted, The Wild Wild West. This one was conceived as James Bond in the days of cowboys and Indians, post Civil War.

The hero was Jim West, top agent for the US Secret Service. Handsome and tough, he wore fancy cowboy duds that hid all sorts of clever devices –-smoke bomb, plastic explosive, tiny gun, etc. -- that would come in handy when trying to escape from the clutches of a supervillain.

But when those devices didn’t work, he used another one: his macho charm to woo a villainess away from the influence of a criminal mastermind.

I just watched a DVD collection of the first season of TWWW. I can imagine desperate guys in the 1960s that saw Jim West in action with the fairer sex and used him as a role model. (Maybe some guys today are still emulating him.) They probably picked up on these points:

-- Be seen stripped down to your waist. In every other episode Jim West would take advantage of a situation to expose his bare, semi-hairy torso. Or the supervillain he faced would be so stupid to tie him up half-naked so that his bod would sway any woman, thus making it easy to evade torture and prolonged imprisonment.

-- Don’t waste time during the initial contact with a new babe. In less than three minutes propose an invitation to dinner or the theatre. Or both. But when you plan both, keep in mind your energy levels. Before the date you’ll have to beat up seven thugs or be beaten up by said thugs. Bare-knuckled fighting is intrinsic to he-manism. So don’t overextend yourself with a dinner-theatre combo date.

-- If it’s female, kiss it. Of course, in every episode Jim West always met very attractive women: there was no problem for him to frequently lock lips. In real life your own mileage may vary. Also, remember that West always met healthy women. He was never depicted with cold sores.

But besides these great scoring tips, try to remember this major point: the typical female viewer of The Wild Wild West would see Jim West and then expect a man in non-TV existence to be the same way. So if you want to be a success with a chick, play along with the illusion.

That’s if you think such a woman is worth it.

Adding to my Netflix queue!

I would "recommend" the first season episode called "The Night of the Double-Edged Knife." Insulting native American stereotypes and an "Indian maiden" who "tortures" a topless, tied up Jim West. Ugh, indeed.