I try to mind my own business but not everyone does.  Sometimes a person with a camera is a target for comments.

During the summer I was downtown one evening when I noticed the moonrise.  I decided to take a few shots, my lens pointed down the street.  Off to my side in the plaza area two men sat at a table.  I was unaware of their presence until one of them said: "No one better take my picture.  It's an invasion of privacy."

I ignored him.   He repeated the same words a second, even a third, time.  I wasn't there to record his slope-foreheaded coutenance.  Or be baited into a fight.

Across the street on a building corner was one of the police surveillance cameras found in various spots downtown.  The commenter was being recorded/watched.  So much for his uninvaded privacy. 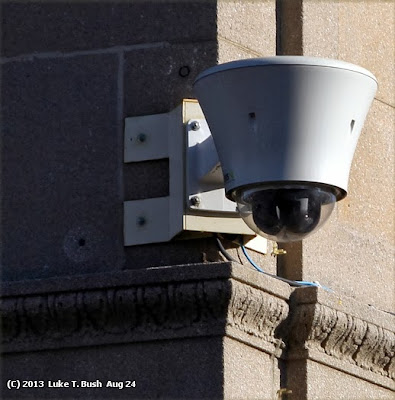 Recently I was in a public place where there was a spider in one corner, down towards the floor.  I was alone at the table, no one else near me.  I wasn't using flash so that wasn't bothering anyone.

I had my back to the others in the room.  At the table behind me three people sat, one of them bloviating about this and that pertaining to his religious faith.  Fine.  I could've cared less.

Without a tripod I was trying to do macrophotography, a feat that takes concentration and patience.  I braced my hands against the table and chair or used a rice bag as a support.  Not as easy as locking down a tripod.  I took a number of shots, knowing that most of them would be misses.

The bloviator said to his table companions:  "He's photographing a spider."

Then he mocked me.  "'Guess what I did today - I photographed a spider.'"

When I wrapped up my shooting I moved to another table.  I heard this comment: "There must be another spider over there."

No, there wasn't. I just didn't want to sit near an ignoramus who professed to be a religious person, someone who believed in God and caring for others.

Among God's creatures a spider is better company than a pissant. 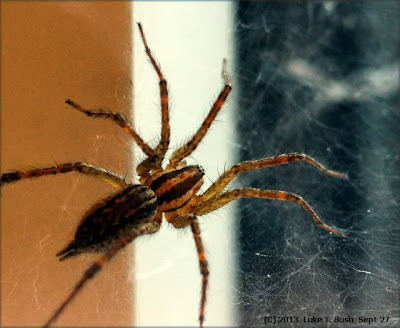