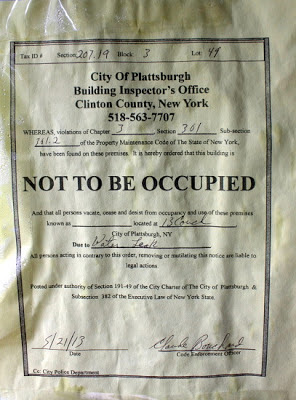 Try this big psychological-emotional screw on for size:

You've lost your apartment through no fault of your own; it's been declared uninhabitable.  You have limited income but some of the organizations that you depend upon don't come through with the help you really need.

And to put a fine point on that screw twisting into your mind:

It's understandable when Debra Buell says she gets angry at times.  Even an able-bodied person would have trouble handling the stress.

Debra deals with rheumatoid arthritis, multiple sclerosis and lupus.  She can only walk a short distance with crutches; her wheelchair is her main means of mobility.

For years she has been an advocate for the disabled, aware of the limitations of the local "safety nets."   She doesn't blame all of this on the social workers and officials who have tried to help her.  But the system, as she has stated in the past, needs to be fixed.

Debra's troubles started earlier this week.  A pipe in her closet, the water main to her building, burst, flooding out the place.

She had told her landlady months ago that there might be a tiny leak, mold was beginning to grow around the closet.  The landlady said she would send someone over to look at it.  Debra hired a person to clear out the closet for the repairman.  The repairman never showed up.  She had to pay to have her belongings returned to the closet.

Debra contacted the landlady again who, according to Debra, thought that there really wasn't a problem, nothing to worry about.  The landlady said: "I don't understand."

The nothing-to-worry-about from months ago broke on Monday.  Debra contacted the landlady who did send a plumber over.  Using Debra's shop-vac the plumber removed many gallons of water but much more remained.

Later that day the building inspector showed up and told the landlady that the problem had to be fixed.  According to Debra, the landlady replied: "I don't understand."

But the message was repeated: the rest of the water had to be removed and a professional cleaner had to fix the mold problem.

"Monday when everyone left," said Debra, "I think they [Building Inspector and Fire Department ] thought they got through to her [the landlady], they thought she would probably get someone in that day or the next day."

The landlady had mentioned to the building inspector that she was getting ready to take a trip.   Debra stayed in the damaged building Monday night, assuming the landlady wouldn't leave until Wednesday or Thursday after looking into the needed repairs.

The next day the city building inspector paid another visit, asking Debra if anything had been done to fix the problem.  No, she said, adding she had left a phone message for the landlady but hadn't heard back.

A lot of other people were waiting to hear back from the landlady: representatives from HUD (Housing and Urban Development), North Country Center for Independence, Clinton County Social Services, and North Country Legal Services.

The silence indicated that motivation had to be created to render a response.   The landlady did stir when she received a message that one avenue to resolve the problem might be for the city to take over her uninhabitable property through eminent domain.

Debra heard the landlady had contacted the HUD office.  The landlady told HUD  she had done everything she was required to do legally.  (Morally?  Don't ask me that one.)  The landlady revealed she had left town early Tuesday for a two week vacation.

I would like to speak to the landlady but until she returns I don't understand – the landlady's side of the story, that is.

On Tuesday two city building inspectors declared the apartment was uninhabitable.   They told Debra she couldn't be in there after 7 PM, no overnight stays.  She can't even cook there.

Since then Debra has been scrambling to find a new home, a wheelchair accessible apartment, while dealing the System's red tape.  Clinton County Social Services did find her a place to stay – in Keeseville, the boondocks (my term), 15 miles outside of Plattsburgh with very limited public bus service.

Earlier in the week Debra said she told Social Services that with a three-day holiday weekend approaching (Memorial Day) they should find her a local hotel room ASAP.  That advice was ignored.  Ergo, she was displaced in Keeseville, not placed in the Plattsburgh.

Since then Debra had to impose on a relative for a place to stay until suitable temporary or permanent housing is found.  As she observed in the subject heading of a recent email: "Homelessness...it's not pretty, especially in a wheelchair."

So how's your holiday weekend going?