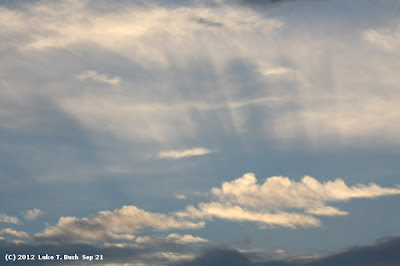 Almost every day I walk or bike to the post office and sometimes along the way I see something interesting to photograph.

Today I noticed a cloud pattern in the evening sky, a row of slanting white streaks pointing upward.  I take out my camera and start shooting, facing west, aimed up over the Press-Republican building across the street.

Suddenly someone shouts at me from behind.  I turn around and locate the speaker, a guy standing on a second-story porch challenging me, asking why I take photographs of the buildings every day around there.

First, I had my back to him.  I was shooting the sky, not a building.  Second, if I want to, I can legally photograph any building on Miller Street whether he likes it or not.  If it's in plain public view, I can shoot it.

This is the third time I've been confronted about taking photos on Miller Street.  A while ago one woman, an inbred troglodyte, told me I was taking too many pictures around her building -- even though I wasn't photographing her hovel.  Another time a pugnacious pudknocker redneck threatened me from across the street if I took his image.  Again I had my back to the person, didn't even know he was there.

You're not stopping me from taking photographs.  And with this latest incident, I wonder what that second-story porch critic was so worried about.  Paranoid?  Moronic?  Or trying to hide something?

I won't let ignorance reign over my intelligence.  Especially in Plattsburgh.