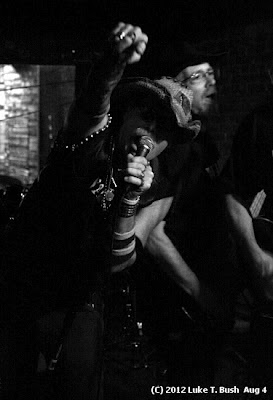 Most oldsters quietly retire, spending the rest of their lives in calm solitude.  But a few still pump up the volume and keep rocking on, aches and pains be damned.

I'm at the Monopole on this Saturday night, wrapping up some photos of a local band.  A night of punk music, the main event is a group from Vermont called The Wards.  I've never heard of them but before their show it's obvious that they are my age.  Four guys and one woman.  Baby boomer gray hair.  But, unlike me, also adorned with tattoos, leather, chains and shit-kicking boots.  (Me, I prefer the reformed hippie look.)

A black-and-white plastic banner hanging on one wall proclaims the band's name.  It features the universal symbol for handicapped parking, the simple outline of a wheelchair bound person, but the logo is upside down.  Disability -- and old age -- be damned?

The Wards blast away.  Great hard sound but are they keeping it real or are they spinaltapping?  The lead singer knocks over his mic stand, cracks vinyl records with this bare hands, lunges into the audience.  If put-on comedian Andy Kaufman was still alive...

The distaff member of the group smiles from behind her Yamaha keyboard, apparently amused by some of the antics.  She looks like someone's grandmother, albeit one who enjoys sharing stories with her grandchildren about the glory days of the Sex Pistols and Plasmatics.

The Wards bill themselves as Vermont's Oldest Punk Band.  A fan tells me they have been around so long that they have a song about President Ronald Reagan.  A Google search doesn't give me much info but does verify they have playing since punk music's early days.

So is their act mostly a put-on?  A question I ask later behind the safety of my computer.  I like to enjoy my calm solitude, no additional aches or pains. 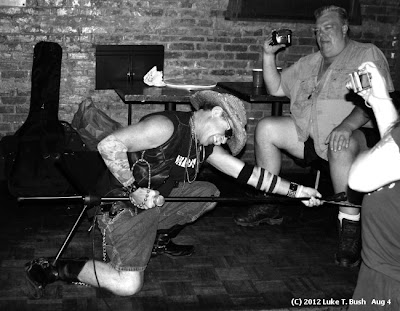 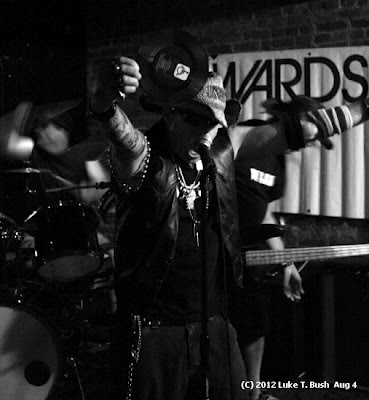 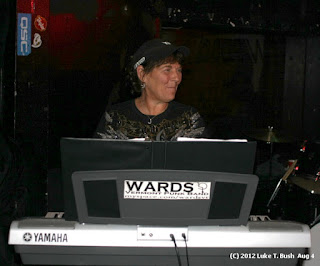 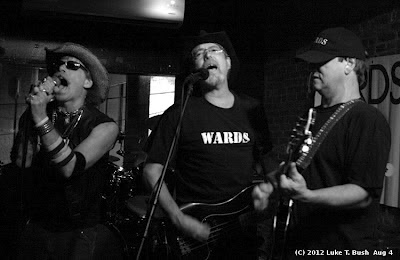