Indie Record Store In A Suitcase 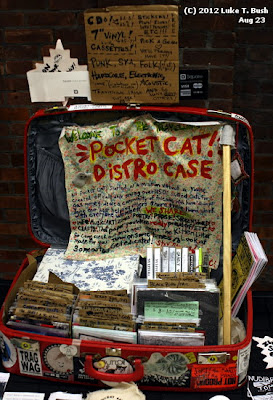 Thursday evening.  Music event at ROTA Gallery and Studios, four acts.  Good performers but that colorful suitcase on a table off to the side keeps drawing my attention.  I find myself clicking almost as many images of that suitcase as each performer.

The case is open, laden with stickers, vinyl, CDs, zines, and cassette tapes.  Some samples are arranged around the table.  It's one of the better displays I've seen at a show.

After the show wraps up one of the performers known as That Really Awesome Guy With A Guitar AKA TRAGWAG AKA Tyler and his friend, Chelsea, talk about their suitcase set-up to some of the attendees.  I overhear Tyler say that besides his own material the case also has works by other creators.  DIY distro. 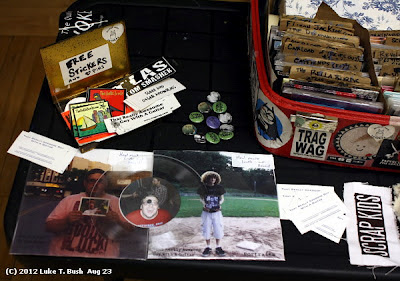 Going into writog mode I speak with Tyler and Chelsea, getting some more details on what they call a record store in a suitcase.

Chelsea tells me that a touring group usually has a case featuring its own work, maybe some stuff by one or two other bands.  She and Tyler like to share merch by others, checking out the material before accepting it.  That way, she points out, nothing "hateful" ends up being distributed by them.

Back in the day the adjective for this type of activity was "underground."  The implication was the Establishment can have the ground above, real creative people would work under their monopolies, maybe even undermine them.  Screw commercialism.

After years of playing the game, trying to get published via mainstream outlets, piling up rejection slips, I enjoy seeing someone succeed in working outside the System.

But don't be surprised if the System notices suitcase distro and it ends up with its own factory copy, trying to be indie and cool but while still foisting the same pre-packaged crap as before.  For the System to survive, it must subsume.