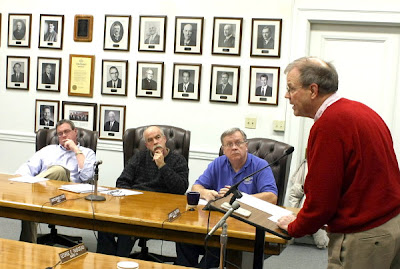 Former city councilor Stuart Voss addresses the council Thursday evening, recommending that creative means should be explored to deal with the public library's budget shortfall.
PLATTSBURGH CITY -- THURSDAY 12/8/11
City resident Kate Gardner is really upset about the Plattsburgh Public Library budget crisis.
How upset? She told the city Common Council that due to an apparent misappropriation of funds, PPL Director Stan Ransom should resign immediately.
Kate and other library supporters spoke during the open comment period at this evening's council meeting.
On Monday evening the PPL Board of Trustees voted to eliminate four positions at the library due to a budget shortfall. Apparently the problem started three years ago, involving the use of a finite amount of money in the contingency fund for expenses instead of raising the budget.
Suzanne Barton, a full-time PPL clerk whose position is on the chopping block, also spoke to the city council, questioning the supervision by the Board of Trustees. She asked what qualifications a board member had in overseeing a budget. The same point was raised by Kate Gardner during her comments. She told the board she had worked with a library board in another community and it had an accountant providing the needed financial oversight.
Speaking with Kate outside the City Council chamber, she said she had the impression that the Board of Trustees was basically a "rubber stamp board." Basically: What came in was just glanced at, stamped, and passed along.
I asked her for her reaction to what had happened (or didn't happen) at the last meeting of the Board of Trustees.
At that meeting, beside questioning the need for the trustees to go into a private executive session, a certain blogger (ahem) asked the board why the employees whose positions were on the chopping block had to find out through a newspaper article, not at a staff meeting the previous day.
Board President Roland Lockwood and others sat there; no response.
Deer in the headlights.
I had asked why didn't the board spot the budget problem sooner.
Deer in the headlights.
I wanted to hear someone else's POV about what had happened at that meeting, how the board responded.
So I asked Kate Gardner, who was also there, for her observation.
Without any prompting from me, she said: "Deer in the headlights."
There were no such stunned Cervidae* moments at this evening's Common Council meeting. At the beginning of the open comment period Mayor Donald Kasprzak said there certain rules pertaining to the forum. No questions could be asked. Questions about library matters should be directed to the Library Board. The council would only record comments. Councilors sat and listened.
Gee, I wonder if the mayor had heard about a certain blogger who had asked all sorts of pointed questions the other night at the Board of Trustees meeting.
Questions that others are asking. Questions that won't go away.
*Not familiar with that word? Ask a librarian.