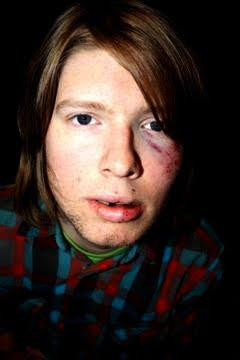 Christopher Rigsbee and his injuries right after an assault back in November.

Early morning, November 19th, 2010. The Plattsburgh City Police Department is contacted after Christopher Rigsbee and his girlfriend are assaulted on the street.

What lead up to the assault? Chris and his girlfriend were walking to a friend's house when some people on a porch taunted Chris, calling him "faggot" and "queer." Chris verbally confronted the group and they physically responded, knocking out three of his teeth, stomping his head in the pavement.

That brutal attack occurred over three months ago. What has happened since then?

Apparently not much. No arrests have been made. No follow-ups in the local media or any statements from the Plattsburgh PD. No mention of the case at the police department Web site (http://www.plattsburghpd.net/news.php), not even a request for information from any citizens who might know something. On February 3rd a public demonstration had been scheduled near the location where Chris and his girlfriend had been assaulted but it was canceled.

Is the story slipping down the memory hole?

I hate using unnamed sources but...

According to a source aware of the situation, Chris has been trying to work with the police. The PD asked him to cancel the February 3rd rally because it would interfere with their investigation. Chris agreed. Two weeks ago the detective working the case was going to contact Chris for a meeting regarding the progress of the investigation. That meeting was canceled. The detective was supposed to contact Chris last week but once again, nothing.

The source says that Chris is considering legal action if the Plattsburgh PD doesn't respond to his inquiries. Even though he was the victim, Chris had to file a FOIL (Freedom of Information Law) request to get information from the police, paying a $25 fee out of his own pocket. The police have a month to reply to his FOIL request.

I hate using the word on the street but...

Some cynics think the PD is trying to delay taking any direct action, hoping that Chris will give up and let the matter just fade away. Why? According to the cynical speculation, one or more of the attackers has connections. Also, it's rumored that one attacker is a college student with a scholarship that he might lose if charges are made.

The Plattsburgh police are known to be tight-lipped about their operations. Even local reporters have problems getting details on investigations. The PD claims that revealing out too much info will interfere with ongoing cases. In too many instances, anyone making inquiries is told to file a FOIL request, being forced to work through the bureaucracy and waiting for results, if any. For the most part, so it's said, the media just give in and let the PD have its way.

Speculation and rumors spread, an example of poor public relations for a city department that is supposed to be serving the community. And while investigations have to be thorough, some wonder why this one has gone on for so long without any apparent movement.

What does Christopher have to say about the delays and the possible interference with an "investigation"? Did he ask to see if any evidence that an investigation is being carried out? Has anyone suggested that the local news outlets make a plea-Oh that's right, the local news anchor and police chief are sleeping in the same bed-forget that!
As far as one of the alleged assailants having a scholarship, since when have the Plattsburgh PD cared about about messing up someone's life when they have been connected to criminal activity? More likely PSU is not wanting a student to be jammed up, which would embarrass the people who awarded this felon support for his education. I would say violent criminals, no matter their academic status, need to be arrested, tried, and dealt with appropriately. But it will not happen. I suggest Christopher go downtown, stand on the Margaret Street sidewalk and look west. He will see a stone wall...which is exactly what he will experience if he continues dealing with Plattsburgh PD or city government in general.