No Sunday Snow Removal At The PR?


On January 20, 2011 the Press-Republican published an article entitled "Snow causes tangles as cold spell nears" (online version here). The article and the accompanying video dealt the with plight of Debra Buell who has to get around the city with her wheelchair. As both the article and video point out, she is forced to use the street when sidewalks are unshoveled, not the safest option but the only one left open to her.

Yesterday an unexpected snowstorm hit, complete with thunder and lightning. Today most people got out and shoveled the sidewalks adjacent to their properties -- except one business. The Press-Republican. Check out this image taken at 6:19 PM. 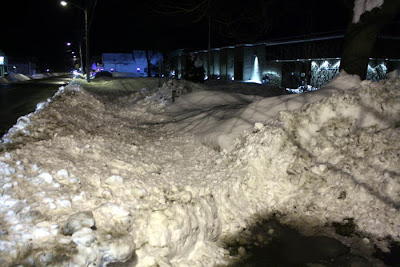 The sidewalk hasn't been touched. It's blocked all the way up the street to Fitzpatrick's Bar -- which, by the way, did clear its sidewalk.

This isn't the first time this has happened. It seems that if a snowstorm strikes during the weekend, no one at the PR is around to clear the Margaret Street sidewalk. Yes, like other property owners, the PR has until 24 hours after a storm to clean up, but I noticed other businesses did clear their sidewalks today, especially ones that are closed on Sunday. Some people are considerate; they don't wait for a deadline to be a good neighbor.

Maybe the official snow shoveler at the PR had today off for the Super Bowl. Whatever the reason, the PR should do more than nag others: it should be leading by example.

Like I've said before: Shovel up or shut up.