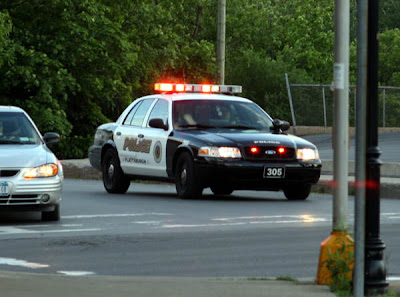 When I took this photo the other day, the police officer was running both his emergency lights and siren. But sometimes the siren remains off. Why?

What was that red streak? A fireball?

No, it was a city police car speeding by. I'm looking out the front window of a downtown coffeehouse one evening when I see the bright blur. No warning, at least no audible warning. The car zipped by without a siren, shooting down Main Street.

This has happened to me a couple of times. I'm sitting at a table and then there's a startling flash of red ripping by. Why isn't a siren on?

I asked that question again last night. I'm walking home, around 9 PM, dusk, approaching an intersection. From the opposite direction a police car pulls out from a parking lot, lights flashing. It makes it way around three cars waiting at the stoplight before turning and speeding away. No siren, not enough one short horn "blip."

So I've done some digging via Google. In New York State police officers are required to run their lights to warn motorists on the road when responding to an emergency call. But according to New York State Vehicle and Traffic Law, Article 23, Section 1104, "an authorized emergency vehicle operated as a police vehicle or bicycle" doesn't have to run a siren. I don't know why a police car is allowed to run silent while an ambulance has to use an audible warning system with its emergency lights. Maybe the police are trying to sneak up on the bad guys?

The same section also states: "The driver of an authorized emergency vehicle may... Exceed the maximum speed limits so long as he does not endanger life or property..."

As reported in the Albany Times Union, in August 2009 a police cruiser in Albany was responding to an emergency call when it broadsided another car, a 1992 Honda Civic, operated by a civilian driver. The passenger in the second car was killed.

The State Police investigation into the fatality said that both drivers were at fault but the prime fault was with the civilian driver. Secondary fault, said the report, lay with the police officer for “failure to drive with reasonable care.”

One of the key questions in the case was whether or not the police officer was operating his siren. Some witnesses and a recording of radio transmissions during the incident backed up the claim that the siren was operating before the crash. If an accident does occur with a police vehicle, it helps the officer's case if he had flashing lights and siren operating at the same time. As the Times Union stated, the siren being on or off before the crash "could loom large in the lawsuit" being considered by the family of the dead passenger.

So why are a few officers of the City of Plattsburgh PD taking chances during with silent runnings?

What about those that have hearing-impairment? Just saying.

The ultimate responsibility is with the pedestrian to look both ways. That doesn't relieve the PD of potential negligence though. In a court of "law", typically the police are given the benefit of the doubt.

I suppose the urgency of the call might make a difference too. Robbery in progress vs. Return to Office. (Warm, $90k+, Heated office)