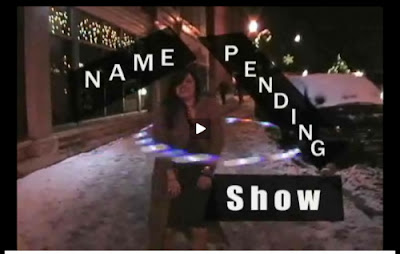 Hyperlocal: Focusing on people and events in your locality.

DIY: Do It Yourself.

Combine the two and you end up with the Name Pending Show, created and produced by Caleb Mosher. In a roughly half-hour format Caleb covers the Plattsburgh area, spotlighting rock bands and comedians, crafty visual artists, even a giant snowman who likes waving at passing cars. And sometimes serendipity plays a part: one snowy night there's a young woman twirling an illuminated hula hoop who's agreeable to be videotaped. The result is visually interesting, as they used to say on the original American Gladiators series.

As any DIYer will tell you, all the effort isn't driven by the profit motive. Usually there is no money to be made. Caleb does his show as a hobby, for the love of it.

"I don’t watch much TV," he explains via email. "The shows I like are pretty much always canceled. So I am making my own TV show for mostly my own entertainment. My show might not be that good but it’s much more fulfilling than simply spending those hours watching TV and complaining that nobody knows how to make a decent show anymore."

It might look easy but for a half-hour program there's a lot of time involved in getting the show ready.

"I would guess that I shoot about 6 hours of footage for every half hour of footage that goes onto the show," Caleb says. "Much of the raw video I can’t use and other stuff just isn’t good enough."

But the raw footage is just the beginning; all that video has to be edited. Caleb's rough estimate is around "12 hours an episode or more" to render the final product into a DVD version.

He uses old but viable equipment: mainly MiniDV camcorders (they record with that primitive medium called tape) and a six year old PC for editing.

"MiniDV is pretty much an obsolete format now," says Caleb, "and you can’t really buy the camcorders in normal stores anymore. Everything I use is stuff I have found on clearance or in thrift stores."

"There is no budget for the show," he adds. "None at all. There is pretty much only the effort that I put into it. And that’s the beauty of working in a digital format. It’s amazingly cheap but you can still do a lot with it with some effort."

Even his post-production set-up is inexpensive but adequate. "When I am editing I sit on a computer chair I got at a garage sale for $5. It still has the $5 tag on it. My computer desk is one that I found on the side of the road in Watertown NY. It has been broken apart 3 times and put back together. This last time I had to buy sections of 2X4 to nail it back together again. It’s amazing the thing hasn’t fallen apart yet. I can’t say enough good things about particle board desks that are made in Canada. They last."

Don't expect a major TV network executive to describe his office in such an economical manner. Despite all the money poured into a mainstream show, it can be unwatchable while a DIY effort just a few clicks away holds your interest.

Caleb is open for suggestions for material for the Name Pending Show. You can contact him through his blog or Facebook:

Luke thanks for sharing this article .. keep up the good work